Why the European Union Must Be Abolished
by Fjordman

In October 2008, I published an essay entitled Ten Reasons to Get Rid of the European Union. The reasons I cited back then (and many more could be mentioned) were:

The European Union (EU) is not good for prosperity in Europe. Perhaps it would have been so if it had remained a free trade zone, as it was first claimed to be. However, the bloated and excessively centralized bureaucracy of the EU today is clearly harmful to ordinary Europeans. It is nonsense to believe that this ramshackle, top-heavy Frankenstein monster is going to make Europe more competitive.

As I warned in 2008, the EU does not protect the peace in Europe. On the contrary, it undermines stability in the continent by dismantling border controls at a time of the greatest population movements in human history. Many immigrants come from unstable countries whose instability spills over to European states. Through its senseless immigration policies, the EU may become partially responsible for triggering internal conflicts in several European countries. It may be remembered as the “peace project” which brought war to Europe again.

The European Union has created a borderless region from Greece to France and from Portugal to Finland, yet the citizens of these countries still pay most of their taxes to nation states whose borders are no longer upheld. It is ridiculous to pay up to half of your income to an entity that no longer controls its own territory or legislation. Unless national borders are re-established, the citizens of EU member states no longer have any obligation at all to pay taxes.

The EU promotes a ridiculous amount of laws and regulations, yet street crime goes largely unpunished. Laws are used to punish law-abiding citizens while real criminals rule the streets, although this flaw is admittedly shared with many national governments. European authorities make a mockery out of the social contract every single day as they fail to uphold law and order.

In Scandinavia, the cultural critic and columnist Kasper Støvring published a book in early 2014 making many of the same arguments: The EU does not promote “peace” in Europe. On the contrary, it could be sowing the seeds of future conflicts by systematically breaking down dozens of European nation-states at the same time. The open borders through its Schengen Agreement and the legal and illegal mass migration promoted by the EU’s policies are particularly dangerous.

What has changed since 2008? Nothing. At least, nothing positive. If anything, the problems are worse today than they were some years ago.

The financial crisis was then just beginning. It turned out to be so serious that the euro, the common currency for many (but not all) EU member states, could have collapsed. It hasn’t, at least not yet. But the crisis has still not been resolved. It has hit many countries in southern Europe hard, including Portugal, Spain, Italy and Greece. The public debt keeps mushrooming.

The euro currently seems like a bad idea. Greece does not have the same economic level or industrial output as does Germany. It is artificial for these countries to have some same currency.

In fairness, a few of the problems we are currently witnessing are not unique to the eurozone. Britain, which is a member of the EU but not of the euro, also suffers from spiraling debt. So does the USA, and for that matter Japan. In all of these big economic blocs, the central banks have for years been extremely aggressive with money-printing, although this hasn’t solved the underlying issues.

The EU is not the cause of all of Europe’s ills. Many of them are common to the entire Western world. A few of them are even more pronounced in North America than they are in Europe. However, the EU makes many of these fundamental problems worse, and adds several more on top.

It would be worthwhile to debate whether the EU was fundamentally flawed from its very inception, or whether it was a good idea that turned bad somewhere along the way. I used to be more pro-EU as late as in the 1990s, but then I was young and naïve. When I read about how Jean Monnet and other key players from the beginning wanted to sell a planned European political federation as merely a free trade zone, I am tempted to conclude that the EU was indeed flawed from its very inception. It was born in lies and deceit.

Regardless of whether the EU may once have been a good idea or not, the actual organization as it exists today has become thoroughly corrupted. It is increasingly totalitarian and wedded to dangerous Utopian ideas.

Can the European Union be reformed? I find the possibility very unlikely. The entire organization is now rotten to its core. It has, sadly, managed to bribe and seduce the political establishment throughout much of the European continent. The EU cannot be reformed; it can only be abolished and completely dismantled. 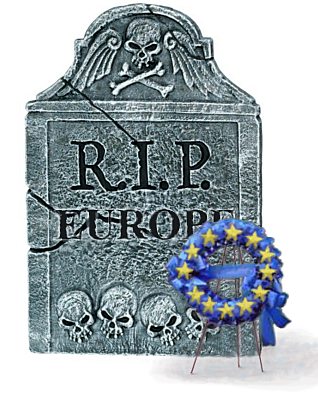 An unresolved question is how the dissolution of the EU will take place, if it does. Ideally, the common people should rise up against the small elite that has usurped power and is grossly abusing this power. At the moment it seems probable that economic tensions stemming from a badly constructed union could ultimately fuel the demise of the EU. The final outcome remains to be seen.

In terms of money and largely unchecked and unaccountable power, however, it seems unlikely whether the ruling EU elites will give up their lucrative positions without putting up some sort of resistance.

26 thoughts on “Why the European Union Must Be Abolished”