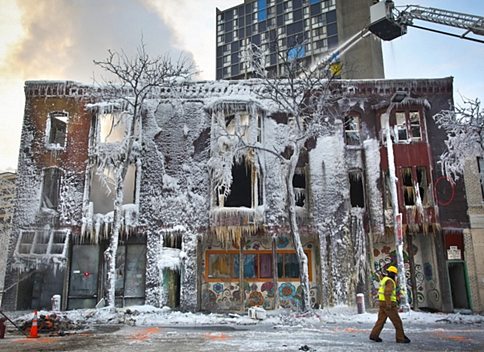 On January 1, a building in a predominantly Somali neighborhood in Minneapolis exploded and burned, leaving three people dead and another thirteen injured, some of them grievously. There was no obvious investigation of the cause of the explosion, only a rush by city and federal authorities to declare that no bomb was involved and that there was no connection with “terrorism”. The damaged building was razed in less than 72 hours.

As we reported here last week, the owner of the demolished building, Garad K. Nor, had previously been on the U.S. Treasury’s interdicted list for allegedly running a hawala transfer business (the traditional and informal Arab/Muslim way of conducting long-distance financial transactions) that laundered money for the al-Shabaab Islamic terror outfit in Somalia.

Writing in the New English Review, Jerry Gordon has expanded on our report to include a wider discussion of the hawala problem. Some excerpts are below:

Back in 2007 we published a report on a similar Hawala transfer indictment for Abdizirik Hassan, the head of the Somali Nashville Community Center who like Nor was also caught in the Al-Barakat web of money transfer indictments in October 2001. He was fined and somehow had his prosecution dropped five years later. Despite the executive director’s indictment, the SNCC received a $500,000 grant from the Office of Minority Health Programs of the US Department of Health and Human Services. That became a subject of further investigations on allegations of fiscal abuse of a women’s health program.

In early February 2014, The Investigative Project on Terrorism reported a Somali émigré cab driver in San Diego, California, Ahmed Nasir Taali Mohamud from Anaheim, was sentenced to six years for providing material support to Al-Shabaab through a defunct Hawala money transfer system, the Shidaal Express. In November 2013 a federal Judge had sentenced his three accomplices to terms of between 10 to 18 years. The co-defendants included cab driver ring leader, Basaaly Saeed Moalin, Mohamed Mohamud an imam at a mosque frequented by the local Somali community and Issa Doreh who worked at the Shidaal Express money transfer firm. Evidence was presented at a trial in early 2013 that Moalim had been in direct contact with an Al Shabaab commander, Aden Hashen Ayrow who requested money for jihad. Ayrow was killed in a US missile attack in May 2008 in Somalia.

The Hawala money transfer system is a lifeline for war ravaged Somalia. Hawala in Arabic means transfer or remittance. Virtually the only means available for remittances from the Somali émigré community. A July 2013 Oxfam America study indicated that in 2012 more than $215 million was remitted via the Hawala system from the Somali émigré community in America. This was nearly equivalent to the $242 million in US development and humanitarian aid for Somalia. Degan Ali of Adeso, a Somali NGO based in Minneapolis was cited in a TCDaily Planet report saying that the Somali diaspora transmits $1.3 billion annually that supports 40 percent of the Somalia population.

The Tawakal Express franchise owned by Nor is one of four Hawalas that operate in the Twin Cities. The others include Dahabsiil, Amal Express and Amaana Express. Those Hawalas in the Twin Cities route funds through a California Bank. In light of federal prosecution of Hawala operators and Treasury investigations major banks like Wells Fargo and US Bank have shut down Hawala accounts. David Reiling, CEO of Sunrise Community Bank interviewed on Minnesota Public Radio, in reaction to the two women convicted for money transfers to Al Shabaab via Nor’s Hawala, said:

“We don’t want to be involved in money getting into the hands of the wrong people in any way, shape or form. So the only way we know at the moment to mitigate that risk is to close these accounts, until we can find another solution or work with the government to re-establish those lines.”

So if it is increasingly risky for Somali émigrés to use, why would they still use the system to send funds for both humane and nefarious purposes in war-ravaged Somalia? These and other questions were raised in a joint US Department of the Treasury — Interpol Monograph on the background and opaque functioning of the Hawala money transfer system. Also see the US Treasury Resource information on Hawala and alternatives, here.

The primary reason is that it is cheaper compared with using bank based electronic transfer systems like SWIFT or BAN that charge separately for sending and receiving funds. Hawala transfers are faster than international bank transfers taking less than a few days compared with up to a week for the latter. The Hawala system is more reliable than the international bank routing system which goes through several layers of financial institutions. There is no bureaucracy in the Hawala system, meaning no checks on the senders’ identity or immigration status. Hawala transfers lack a paper trail making it ideal for anonymous illicit transactions. The Hawala system lends itself to tax evasion by making transfers that are free of scrutiny.

Hawala lends itself to operating with low overhead in store fronts or shared business. The operators of Hawalas engage in exchange rate speculation and black market currency dealing. One example cited by the Treasury-Interpol authors was a US based hawala operator engaged in drug money laundering and legitimate transfers who alleged they could make a profit on an exchange rate margin of 2% which is more competitive than via a bank. Hawala operators are also involved in businesses where they have frequent need of foreign transfers. At its core the Hawala system operates on the basis of trust.

The GoV investigative report asked a question about why Nor was in Dubai and why the largest Hawala is headquartered there. One answer according to the Treasury-Interpol authors is that Dubai has a large pool of expatriate workers from South Asia where the Hawala system originated. The other is that Dubai is a major gold trading market the bulk of which is transmitted legally and illegally not only to South Asia but elsewhere in the Middle East, for example, Iran.

We noted the convictions of Somali émigrés in the Twin Cities and Southern California for essentially laundering funds to Al Shabaab in Somalia. The Treasury-Interpol report revealed how so-called “black” Hawala transactions are accomplished for offenses such as narcotics trafficking, fraud and Muslim charity funds devoted to the support of Jihad. That involves a three phased process of placement, layering and integration. In the US, the Treasury requires reporting of cash transaction over $10,000. Hawala operators evade that disclosure by taking amounts that they essentially commingle or place with regular business bank deposits. The hawala operator in the layering stage makes these commingled funds appear as if they came from legitimate sources such as invoices. This is risky as it requires a paper trail and thus can lead to the source of funds and unravel the laundering network. Hawala transfers often leave a limited or confusing paper trail. The Treasury—Interpol report notes:

Even when invoice manipulation is used, the mixture of legal goods and illegal money, confusion about ‘valid’ prices and a possibly complex international shipping network create a trail much more complicated than a simple wire transfer.

In February 2013, Rep. Ellison journeyed to Mogadishu, the first visit by a US Congressman on the occasion of US recognition of Somalia’s new government. It marked a period of relative calm before the Westgate Mall massacre perpetrated by Al Shabaab in Nairobi, Kenya in late September 2013 shattered it. His remarks eerily mirror those of President Obama during his 2012 Presidential campaign when he proclaimed that “bin Laden is dead and al Qaeda is on the run.” In this NPR report Ellison said:

But Ellison was also there to help out Somali émigrés in his Congressional district having remittance problems. He said:

We’re very correctly trying to stop financing getting to Al Shabaab. But our policy may — well, for sure it’s hurting a lot people who have nothing to do with Al Shabaab.

He might start at home with requesting a federal investigation of Garad Nor, the Hawala operator and owner of the property that mysteriously exploded in a ball of fire of indeterminate origin at 8:16AM on January 1, 2014.

Read the rest at The New English Review.

2 thoughts on “The Hawala Jihad Pipeline”