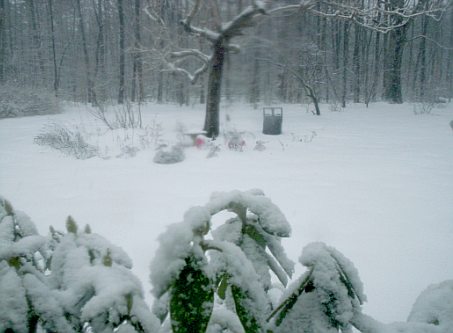 That “not much of a blizzard” is having the last laugh. It was supposed to have been over by 3:00 p.m. but shows no signs of stopping.

Here is the official “Winter Storm Warning” update, as of a few hours ago:

All of that ‘prediction’ has indeed come to pass, with an extra addition: freezing fog and maybe thicker snowfall than they thought.

The wind has indeed changed from northerly (which seemed strange given the direction of the storm) to a more decidedly western direction for the thickly falling flakes. The wind hasn’t picked up yet and probably won’t until after dark.

My concern remains those iced (and now snow-weighted) electric wires running down the mountains toward us, which is why y’all are sharing this update. The trees which had remained so oddly free of snow are covered now. And every imaginable gathering has been cancelled, including – she said gleefully – a follow-up doctor’s appointment tomorrow. I’d much rather hang out here reading y’all ‘s coments.

The Baron just said “if the wind doesn’t pick up, we won’t have any trouble”.

And I replied, “well, it says here there’ll be gusts to thirty miles an hour.”

The Baron said: “Then we’re in trouble…”

Saint Valentine’s Day nor’easters were common during the last mid-century. And no such thing as fuel shortages back then, either. At least, not counting the Great Depression. Oh wait. That’s what we’re in now, innit? 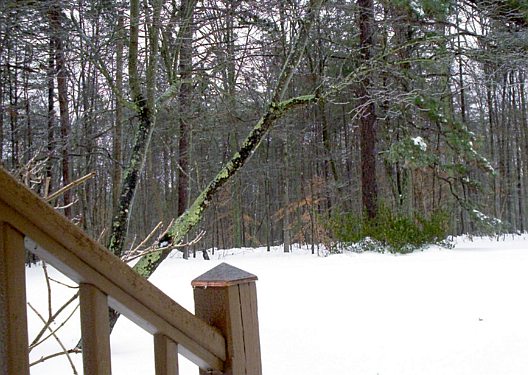 Well, it’s not much of a blizzard, at least not here at Schloss Bodissey. They had it worse down in Southwest, in the mountains, and also further north in D.C., from what I hear. Based on the animated radar images, New York City is getting nailed at the moment.

As blizzards go, this one has been about as mild and harmless as could be hoped for. None of the snow stuck to the trees, not even the pines. There was no wind to speak of. We got about seven inches (18 cm) of dry snow, followed by about two-thirds of an inch (2 cm) of sleet, topped off by a little bit of freezing rain. The temperature is above freezing now.

The weather service is calling for more snow late this afternoon, but there’s no sign of it so far. 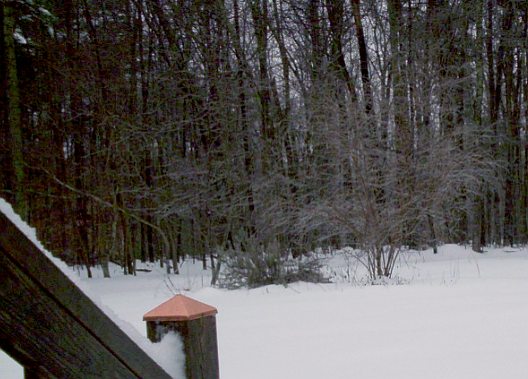 A harmless blizzard is generally not very picturesque. None of the photos are particularly interesting.

Pretty boring, all in all. Time to get back to Counterjihad work…