Update: A follow-up article about the concern expressed by Turkey’s ambassador to Bulgaria has been appended to the bottom of this post. 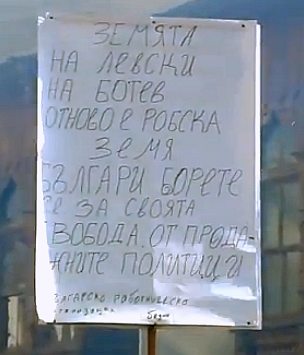 As reported in the news feed last night, demonstrators in Plovdiv, Bulgaria’s second-largest city, converged yesterday on a mosque and attacked it with stones, torches, bottle rockets, etc. The protesters objected to the recent return of a mosque in Karlovo to Muslim control, more than a century after it was taken over by the state when Bulgaria gained its independence from the Ottomans.

Vlad has located several videos of yesterday’s events in Plovdiv:

The image of the sign at the top of this post was screen-capped from one of those videos. According to our Bulgarian correspondent RR, the sign reads:

“The land of Botev and Levski [the two most prominent revolutionaries against the Turkish rule] is a land of slaves again, Bulgarians get to struggle with the corrupt politicians” — the wide meaning of this message: the “ruling coalition now is dependent on the Turkish ethnic party”, but the slogan is not very specific.

RR is working on translating some of the video material. We’ll post updates when more comes in.

Below is a Reuters report on yesterday’s events in Plovdiv:

SOFIA (Reuters) – Bulgarian police detained more than 120 people on Friday after hundreds of nationalists and soccer fans attacked a mosque in the country’s second city Plovdiv, smashing its windows with stones.

Over 2,000 people had gathered outside a Plovdiv court as it heard an appeal case dealing with the return of an ancient mosque in the central city of Karlovo, taken over by the state more than 100 years ago, to Bulgaria’s Chief Mufti, the Muslim religious authority.

The rally then marched through the city and some protesters, chanting racist slogans, approached a Plovdiv mosque cordoned off by police, police said in a statement.

“Firecrackers, torches and stones were thrown at the mosque. One policeman was injured. Some 120 people were detained,” it said.

Sofia prosecutors said they had charged eight people with hooliganism, crimes against religion and xenophobia.

TV footage of national BNT television showed several protesters who appeared to have suffered head injuries in clashes with police.

The Chief Mufti condemned the attack on the mosque and said the attempt to pressure the court put democracy at risk in the European Union country.

Muslims make up about 13 percent of Bulgaria’s 7.3 million people.

The Chief Mufti has launched some 26 court cases to try to restore Muslim ownership of 29 mosques and other property across the Balkan state, prompting some public opposition in the predominantly Orthodox Christian population.

The Turkish ambassador to Bulgaria, Süleyman Gökçe, has expressed concern at the attack on the Dzhumaya mosque in Plovdiv by a crowd of thousands of protesters but says that the incident will not damage bilateral relations between Turkey and Bulgaria.

The attack took place during a protest on February 14 against court applications by the office of the Chief Mufti, spiritual leader of Bulgaria’s Muslims, for properties historically owned by the Muslim community. Windows of the historic mosque were broken when missiles including paving stones, fireworks and bottles were thrown, several people were injured and about 120 arrested after police intervened.

The protesters, many of them from local football fan clubs and also from the town of Karlovo where a court application regarding former Muslim properties has resulted in objections from local politicians, also marched on the Turkish consulate in Plovdiv and on the city headquarters of the Movement for Rights and Freedoms (MRF), the party led and supported in the main by Bulgarians of Turkish ethnicity.

Ambassador Gökçe told public broadcaster Bulgarian National Radio in an interview on February 15 that he was sure that all Bulgarian institutions were working hard on the case. He said that the events on Plovdiv had been cause for concern. He added that there had been many Turkish citizens and had the situation not been brought under control, matters could have worsened..

The MRF strongly condemned the attack on the Dzhumaya mosque. In a media statement, the party alleged that the “vandals” had been led by the mayor of Karlovo, Emil Kabaivanov and the breaking of the law had been possible because the mayor of Plovdiv, Ivan Totev, had not complied with the recommendation of the Interior Ministry that the march be banned.

The MRF asked “what dark forces” were behind the undoubtedly well-organised “and certainly not spontaneous” desecration of the mosque. The aim, the party said, was undeniably political – the bringing down of the current government by stoking ethnic conflict. The party called on the government and the law enforcement agencies to take every action necessary to identify the instigators and organisers and to prevent further actions behind the scenes against the rule of law in Bulgaria.

Local media reports said that questioning by police of those arrested during the clashes in Plovdiv continued late into the night on February 14. Prosecutors initiated five fast-track proceedings for hooliganism and assault and two pre-trial investigations for destruction of property and vandalism, as well as for xenophobia. Plamen Uzunov, head of the regional directorate of the Interior Ministry in Plovdiv, said that of the 120 people arrested, 10 were still in custody on February 15.

There was further political controversy on February 14 when the chief secretary of the Interior Ministry, Svetlozar Lazarov, said that Plovdiv mayor Totev was to blame for the bloodshed in the city because he had not banned the rally. According to Lazarov, Bulgaria’s Prosecutor-General Sotir Tsatsarov had called Totev, asking him to stop the protest. Totev is a prominent member of opposition party GERB, and party leader Boiko Borissov responded by criticising Lazarov for trying to lay the blame of the events at GERB’s door.

13 thoughts on “Protests in the Land of Botev and Levski”