Olympia and the Ancient Olympic Games
by Fjordman

In ancient Greece there were four so-called Panhellenic Games, open to all (free male) Greeks. They included the Nemean, Isthmian and Pythian Games. However, the Olympic Games were apparently the oldest of them.

Outsiders sometimes confuse Olympia with Mount Olympus. Olympia, where the original Olympic Games were held, is situated in the western parts of the Peloponnese, the large peninsula in southern Greece.

Mount Olympus, the highest mountain in the country at 2,917 meters, is located in northern Greece. In ancient Greek mythology, this was believed to be the home of the Olympian gods: Zeus, Poseidon, Aphrodite, Apollo, Ares, Artemis, Athena, Demeter, Dionysus, Hephaestus, Hera and Hermes. Hades, the brother of Zeus and Poseidon, ruled the Underworld. 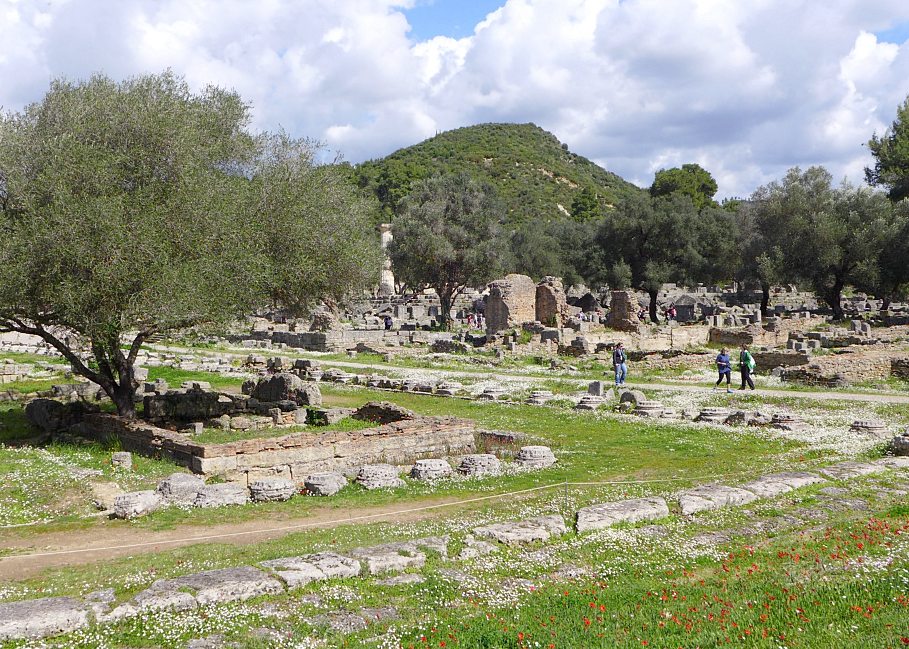 The archaeological site of ancient Olympia, just next to the Stadium

There are traces of older buildings at Olympia, but according to tradition, the first Olympic Games took place there in 776 BC.[1] They were initially mainly of local importance, but gradually grew in significance. The games were held every four years. Whenever they took place, an Olympic truce of peace was supposed to hold force between the various Greek city-states.

The ancient Olympic Games continued from 776 BC until at least 394 AD. They were suppressed in Late Antiquity, after Christianity had been established as the state religion of the Roman Empire. The Olympic athletic competitions had formally been held in honor of Zeus, the mightiest of the Greek deities. As such, Christians were partly associated them with pagan gods. 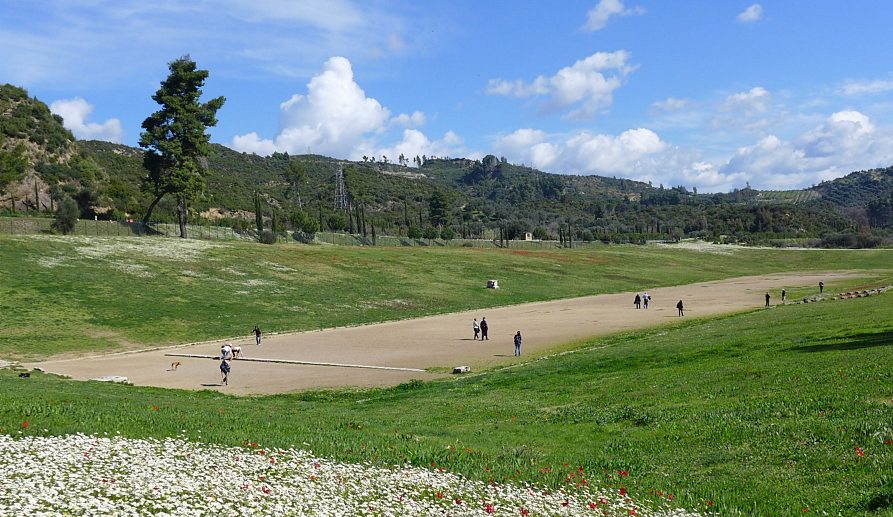 The central part of Olympia was dominated by the majestic Temple of Zeus, with the Temple of Hera parallel to it. If you visit the Archaeological Museum of Olympia today, it houses remains from the workshop of the great sculptor Phidias (or Pheidias). These include tools such as bronze spatulas and awls as well as clay moulds. He stayed with his assistants at Olympia, after having worked for years on the magnificent Acropolis of Athens.

His great statue of Zeus was erected at the Temple of Zeus at Olympia shortly before Phidias died around 430 BC. It was his final masterpiece, considered one of the Seven Wonders of the Ancient World. It is now lost, but we have written descriptions of it plus smaller images preserved on coins.

The statue may have been as high as 13 meters. The huge chryselephantine statue had a core of wood, on which gold sheets were fitted depicting the god’s himation (mantle), hair and shoes. The unclothed parts of the god, such as his face, torso and arms, were made of ivory.[2] The cedar wood throne upon which Zeus was sitting was ornamented with ebony, ivory and gold and decorated with precious stones. The bearded god was crowned with an olive wreath, his left hand holding a scepter next to an eagle. The statue was regularly oiled, in order to maintain the materials.

Visitors for many centuries marveled at Phidias’ statue. It was considered so lifelike that it more or less defined people’s image of Zeus. The Temple of Zeus stood at Olympia for over one thousand years. It was destroyed by earthquakes in the sixth century AD. Only ruins of it can be seen today, although one column was restored for the modern Olympic Games in Athens in 2004.[3] 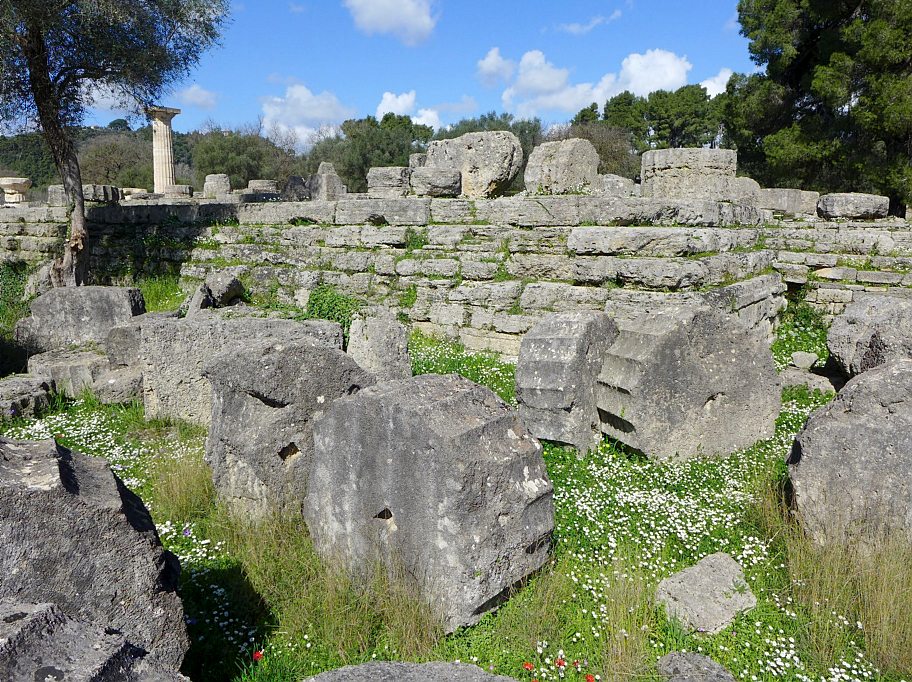 The remains of the Temple of Zeus at ancient Olympia

The archaeological site of ancient Olympia is an interesting place to visit. However, it doesn’t have quite the same atmosphere as does Delphi, the site of the most important oracle in the ancient Mediterranean world. Nor does it have the magnificent mountainous setting of today’s Greek Christian monasteries of Meteora further north.

Upon visiting Olympia in 2013, I was told by our otherwise knowledgeable and reliable guide that the first award at the very earliest Olympic Games was an apple. I had never heard this before, but the claim seems to be supported by other sources.[4]

Apples have been important in European culture for thousands of years, not just in southern Europe but in northern Europe as well, for instance in Norse mythology. Europeans in the Stone Age ate small, wild apples even before they took up agriculture.[5] Heracles (Hercules in Latin), the greatest of the ancient Greek mythological heroes, stole the golden apples from the Garden of the Hesperides as one of his twelve labors.

The winner of an Olympic event was later awarded the famous olive branch. It was originally cut off with a golden sickle by a child whose parents were both alive. The branch was always cut from the same olive-tree, which lay near the Temple of Zeus.[6] The male athletes competed nude, and would use olive oil as a kind of soap for washing as well as to keep the skin smooth. 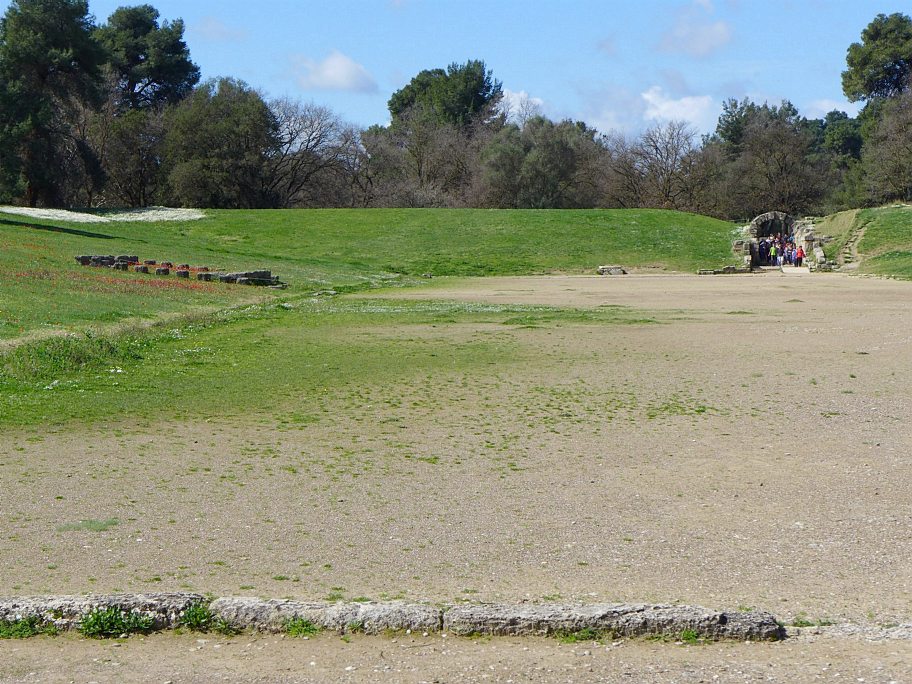 The Stadium at ancient Olympia… 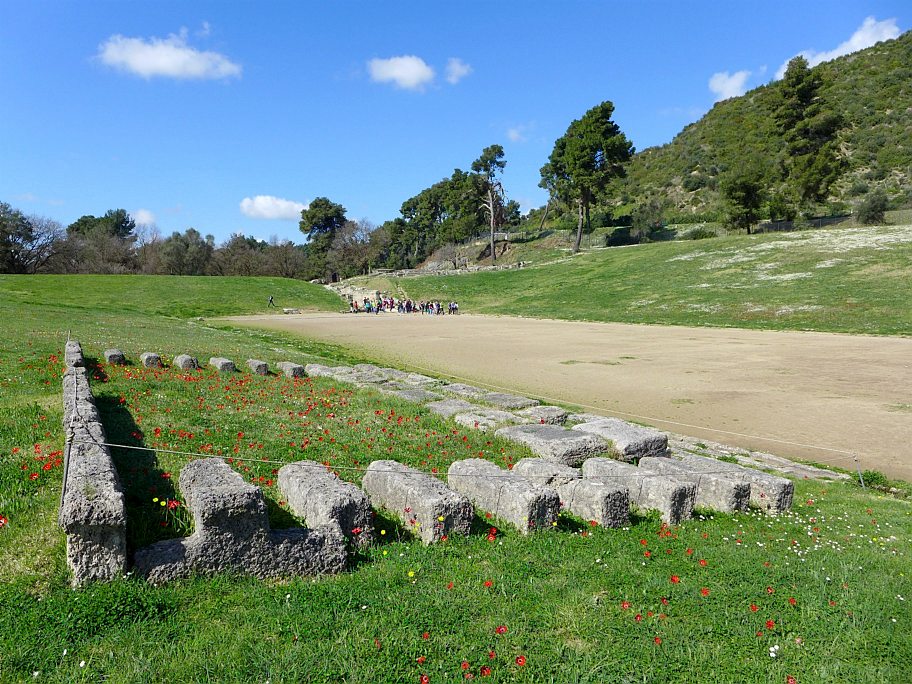 …where the original Olympic Games were held

The thirteen Olympiads held between 776 and 728 BC had but one sport, the stadion.[7] It was named after the building in which it took place. This word became stadium in Latin, from which we derive our modern word for a sports arena. The stadion was a short foot race held in the stadion (stadium) at ancient Olympia, a sprint measuring approximately 180 meters.

Gradually other events were added. One of these was the pentathlon, a contest featuring five events on the same day: long jump, javelin throwing, discus throwing, the stadion and wrestling. The ancient Olympic Games eventually came to include boxing, pankration and longer running contests.[8] Horse races and chariot races took place in the Hippodrome, a wide, flat, open space to the south of the Stadium. The stadion sprint remained the most prestigious event, though, not unlike the men’s 100 meters sprint in the modern Olympic Games.

In the original Stadium at Olympia, runners did not run around in elliptical tracks as they do in stadiums in our time. Instead, they would go back and forth along a straight line, comparable to what competitive swimmers do today.

The Stadium where the ancient Olympic Games were held every four years was 212.5 meters long and 28.5 meters wide. There were no permanent seats. The only exception was a stone platform (exedra) on the southern slope on which the judges would sit. All others would have to sit on the embankment and bring whatever they could for personal comfort, comparable to what people now do at certain modern festivals. The Stadium at Olympia could seat 45,000 spectators or more.[9]

The ancient Olympic Games were held every four years, but always in the same spot at Olympia, not in alternating locations as with the modern Olympic Games. Winning at the Olympics brought great honor, not just to the individual athletes but also to their home community.

All free male Greek citizens could participate in the games, regardless of their social status. They came from all over the Greek-speaking world, including colonies in Italy or around the Black Sea. Milon, a pupil of the philosopher and mathematician Pythagoras, came from the Greek city of Croton in southern Italy. He was six times Olympic wrestling champion, winning for the first time in 540 BC.[10]

One thought on “Olympia and the Ancient Olympic Games”