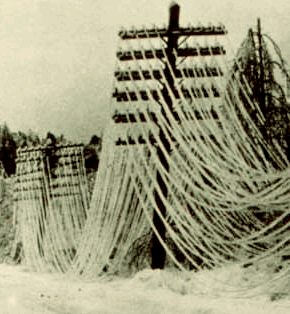 This area in the foothills of the Blue Ridge is more or less the ice border for winter storms. Sometimes the cold holds; when that happens we have a mere blizzard. Those are the passably merciful times, especially if the winds or weight of snow don’t bring the wires down in the mountainous area to our west.

But when the temperature is unstable or the layers of warm and cold air are variable, or the Weather Witches just wanna have fun, we get Icy Conditions. This can be just plain old ice, or perhaps ice followed by snow and then covered with a final layer of ice. That last variety is the most treacherous, mainly because the recovery time is longer when the temperatures remain too low for melt-off. During that interregnum it is the sunsets we remember, with their remarkable reflection of colors sliding across the glazed terrain. During one of them the cat would seem to ice skate to her favorite tree.

We don’t mind being shut away in feets of snow. Or even feats of snow. What is most annoying is living through it without electricity.

[Pioneer life gets old quickly when one is more temperamentally suited to a pied-à-terre in town near the library, preferably one with maid service and laundry pick-up and a Chinese take-out within walking distance… but I digress…]

Being without electricity has a very different meaning now that we are connected to the intertubes. On our side it means the Baron can’t do his online work. On your side, with no comments coming in, you may wonder if we’ve been hacked again, except that you can access Gates of Vienna but it looks like no one is home.

During these times, here is what makes me all grateful and thankful and secure: a few years ago one of our quarterly fundraisers was specifically designated for the purchase of a gas range including installation of piping and the rental of a propane tank. The only difficulty proved to be finding one that didn’t depend on an electronic ignition. As I patiently explained to the salesman, those “improvements” would defeat the purpose since our goal was to get through a loss of electricity whilst remaining warm. So finally (and reluctantly) the owner of the shop found the bottom of the bunch in one of his catalogues: no self-cleaning oven (as if!), no bells and whistles. Bells and whistles are have all become electric. How did that happen?

Now, when winter winds blow the snow against the storm windows, I don’t have to worry about being left in the freezing cold, thanks to our donors. Oh wait. Amend that: I don’t have to worry until the Emperor decrees that gas is doubleplusungood and turns off the spigot of petroleum products that he so deeply disdains. That will come just after the decree that all America’s cars shall be fueled by green algae.

Here are the breathless media predictions for what’s in store. You’ll notice the mix of precipitation:

Much of the nation has been grappling with severe winter weather for the past few weeks – and forecasts do not indicate any signs of relief.

From Texas to the Carolinas and the South’s business hub in Atlanta, roads were slick with ice, thousands were without power, and a wintry mix fell in many areas Wednesday. The Mid-Atlantic region was also expected to be hit as the storm crawled east, and up to a foot of snow could fall in some places.

…and they agreed that the biggest concern is ice, which could knock out power for days in wide swaths.

The blasts of winter weather have taken their toll on the lives of Americans, adding difficulty to travel, canceling school days and draining resources.

But in addition to the inconveniences caused by severe winter weather, there is also the potential for many to suffer from what is known as seasonal affective disorder – a specifier [sic] of depression that is said to be caused by the combination of cold temperatures, precipitation and shorter days.

If you follow the link, you get a great Henny-Penny-the-sky-is-falling discussion about how bad things are, how the weather is driving us ‘round the bend, etc. Can you imagine what purple prose would flow from those perfervid imaginings if we were getting hit with the floods England is experiencing?

Our weather in the mid-Atlantic part of the American Empire is due to natural causes and/or the Weather Witches (shored-up coastal areas are another issue, as is the messing they’ve done in the Mississippi areas). In England though, The Floods are due to the EU Empire’s “policy”.

In other words, get used to it, but be sure to line up for funds to alleviate your suffering. In the U.S. we call the position to be assumed by the beggared ‘bohica’; no doubt the British have an even more colorful description for when government gets you again.

I’ll bet many Brits are gnashing their teeth over the referendum they were promised and then were never permitted to bring to a vote. The prospect of all that money once the UK was shoehorned into the Belgian Empire was simply more temptation than the political class could bear. Greed trumps integrity every time.

6 thoughts on “Life on the Meteorological Edge”