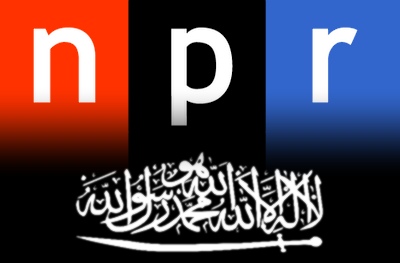 Amarra Ghani is a 24-year-old woman of Pakistani background who is interning at National Public Radio. She was born in Brooklyn, and remembers suffering greatly as a child from the intolerance expressed towards her family by non-Muslim Americans in the wake of the 9/11 attacks. 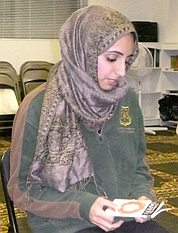 Before she joined the cadres at NPR, she was a student at the University of North Carolina, Asheville, and a member of the Muslim Students’ Association on campus. While she was at UNC in 2012, she guest-blogged at “Breakfast at Night: A Ramadan Photo Project” about her fellowship with the other two “Abrahamic faiths”.

In March 2012 she took part in a UNC event to commemorate Trayvon Martin:

The groups are asking school mates and community members to attend a rally on Thursday wearing black hoodies and black scarfs.

“This is a rally in solidarity for both Trayvon and Shaima,” Amarra Ghani, president of the MSA says in a YouTube promoting the rally. “Your headgear should not be a threat.”

“This is not a weapon of mass destruction,” Ghani says in the video as she points to the hijab around her head.

Last December, in one of her posts on the NPR blog, she talked about the hijab:

The hijab is a physical symbol of God-consciousness for everyday life. The women in the video all wear hijab, but they embrace their own unique style. And the video was meant to spark an important conversation: Muslims are not monolithic.

Ms. Ghani also has a YouTube channel. As far as I can determine, it contains only two videos, one about Occupy Asheville, and the other about Martin Luther King Day at UNC.

As you can see from the above examples, Amarra Ghani is a sterling example of openness, inclusiveness, tolerance, and interfaith understanding… in English. In Urdu — the language of her ancestors from the Indian subcontinent — it’s another matter entirely.

On Twitter yesterday, Amarra Ghani posted a tweet that included a snippet of Urdu. A reader and Twitter user named Rashid Saif understands the language, and sent us a note this morning about Ms. Ghani’s tweet:

Amarra Ghani puts up a face of inclusiveness and Muslim integration when writing for NPR (one example) .

However, when she switches to Urdu on twitter, she is a racist:

thankin the Good Lord like 90x a day that main nahin gori. ~praiSes~

“Main nahin gori” means “that I’m not a white woman”.

So her tweet is really: I thank god 90x a day that I’m not a white woman.

It’s an incredibly racist sentiment that would have any non-Muslim NPR employee fired instantly.

It’s like you always say: they have one image of tolerance when speaking in English and another message of intolerance in Arabic/Urdu etc. It just happens that this isn’t a Muslim Brotherhood politician; she is supposedly an up-and-coming millennial NPR writer.

If you feel that Ms. Ghani’s behavior on Twitter has in any way violated the taxpayer-supported public broadcaster’s stated policies of tolerance and inclusiveness, there are a couple of different ways you may express your dissatisfaction.

NPR has an ombudsman, Edward Schumacher-Matos, who runs an open forum.

You may also use NPR’s contact page (where you may specify the ombudsman as a recipient).

If you use the latter method of communication, however, be aware of this policy:

NPR reserves the right to read on the air and/or publish on its Web site or in any medium now known or unknown the e-mails and letters that we receive. We may edit them for clarity or brevity and identify authors by name and location. By sending us a letter or e-mail, you agree to these terms.

So choose your words carefully, remembering that any single intemperate sentence may be excerpted by NPR and used out of context on one of their public broadcasts.

49 thoughts on “I May be Tolerant and Inclusive, But at Least I’m Not White”