We reported last month on the culturally enriched “enforcement officer” for the Tower Hamlets borough council who harassed a woman walking her dog in the park. The officer accused the woman of allowing her dog to foul the park, and she defied him, famously demanding: “Show me the poo!”

Our British correspondent JP sends a report on another recent example of “dog jihad”, this one in Blackburn. 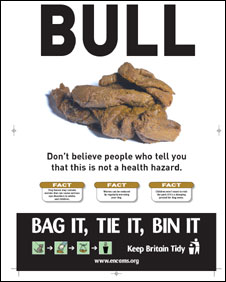 Dog Jihad in Blackburn
by JP

Blackburn with Darwen Council has issued dog fouling posters which residents have found deeply offensive according to a report in the Lancashire Telegraph, Blackburn ‘dog poo’ poster fury. Note that the newspaper does not illustrate its article with an image of the poster, as it is probably too unpleasant for wider circulation, but an image corresponding to the one described in the report has been found at the BBC’s website in an article dated 23 June 2008.

Blackburn Council’s lead member for the environment, Councillor Shaukat Hussain, had this to say in his response on behalf of the Council:

We take dog fouling extremely seriously, and use all powers available to rid our streets of this anti-social and disgusting practice, including using these hard-hitting facts and messages in the public view to hopefully shame those people who selfishly and irresponsibly fail to keep their borough’s streets clean.

Here is the salient comment on the phenomenon known as dog jihad from the recent post at Gates of Vienna, Show Me the Poo!:

The “dog jihad”, like the parking jihad, the alcohol jihad, and all the other tactics employed by zealous Muslims in the neighborhoods where they dominate, is yet another aspect of block-busting. It serves to annoy and inconvenience the kuffar. It makes them uncomfortable and anxious in the streets and parks near their own homes. They learn to conform outwardly to sharia norms, or they move away to escape the harassment. Either outcome is satisfactory from the point of view of the sharia-compliance enforcers.

A report at the Gatestone Institute, Muslims declare jihad on dogs in Europe, suggests that Britain has “become a ground zero for European canine controversies.” The report lists numerous cases, some of the bizarre, showing how Islamic legal and religious norms encroach on freedoms such as pet ownership hitherto taken for granted by populations of the host countries, but now under constant attack through the arrival of culture-enrichers.

Finally, contrast Councillor Hussain’s statement with one made by Blackburn Council’s children’s officer, Maureen Bateson, reported in The Citizen: Blackburn, Darwen and Hyndburn:

We have done a lot of work over a number of years to tackle this awful crime. We can build on that. We must never lose sight of the importance of this issue. We must all be able to spot the signs of child sexual exploitation.

The suspicion is that at Muslim-dominated councils such as Blackburn, dog fouling is assigned a high priority because dogs offend Muslim sensibilities while the rape of children does not. Many British citizens have not lost “sight of the importance of this issue,” even if those responsible for allowing it to occur continue to look the other way, and remain exempt from either significant official censure or lengthy prison sentences. 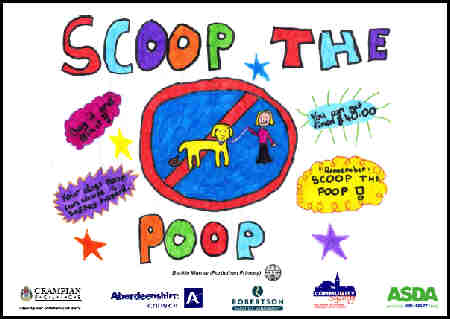 Disclaimer: With reference to this week’s theme of “Odd Jobs”, JP has admitted to working in a pet shop for a brief period. The experience enabled a greater understanding of the vital role animals play in people’s lives, and research has shown for example dog-owners lead healthier lives. But he was surprised at the choices some made.

12 thoughts on “Dog Jihad in Blackburn”