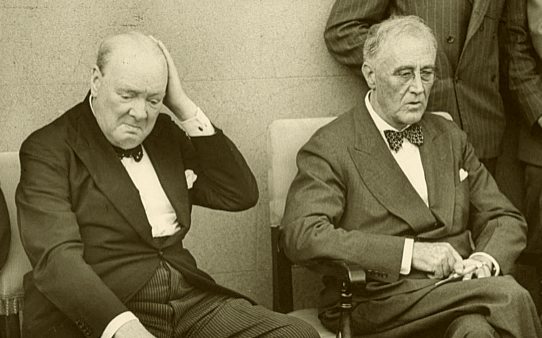 As mentioned here on Tuesday, The New Criterion has published a symposium on Diana West’s book American Betrayal. One of the letters featured was written by the historian Conrad Black, who has repeatedly denounced Ms. West over her analysis of the presidency of Franklin Delano Roosevelt.

A commenter named Brett Woods — a self-identified soldier in the “Kook Army” — took exception to what Mr. Black said in this well-sourced response:

“The slightest dalliance with the notion that the U.S. government was at any time or in any way motivated by anything but the national interest plausibly interpreted and pursued by those at the head of the administrations attacked by Ms. West is unrigorous and outrageous.”

The court historian of the glorious FDR has spoken. Don’t look any further — if you do, you will “split the American Right, render it ineffective” and deliver the governance of the US into the hands of progressives in all eternity. That seems to be the gist of it.

If it wasn’t for the fact that this view so obviously is being imposed upon conservatives by powerful forces, it would actually make for a good laugh. But things being as they are, it seems all the more necessary to try and add some accuracy concerning FDR’s performance especially during WWII and up to the crucial Yalta conference 1945.

Yalta was after all FDR’s chance to really show what he was made of, once again representing the free world, eyeball to eyeball with the most repressive genocidal maniac of the world, the “man of steel”, Joseph Stalin.

The first round in Teheran 1943 clearly went to Stalin as FDR had to be taken to his quarters after he famously fainted, “turned green and great drops of sweat began to bead off his face.”[1]

But how did Yalta go? Was it the shining hour of the glorious FDR, as the court historians claim, or the epic fail of a demented cripple?

To answer these questions it is helpful to look at some of the eye-witness reports concerning FDR’s overall fitness and mental capacity at the time before Yalta.

Turner Catledge, a NYT reporter had the following assessment after having met FDR in march of 1944: “When I first entered the President’s office, I had my first glimpse of him in several months. I was shocked and horrified—so much so that my impulse was to turn around and leave. I felt I was seeing something I wasn’t supposed to see. . . . He was sitting there with a vague, glassy eyed expression and his mouth hanging open. . . . Reluctantly, I sat down and we started to talk. . . . He would start talking about something, then in mid-sentence he would stop and his mouth would drop open . . . and he sat staring at me in silence. I knew I was looking at a terribly sick man.”[2]

Note: I have sourced the quotes below for easy verification, but they were not compiled by myself. They are all found in Evans/Romerstein 2012 game-changing book Stalin’s Secret Agents: The Subversion of Roosevelt’s Government, pp. 21-24.

Labor Secretary Frances Perkins expanded on this condition when she recalled “the change in appearance had to do with the oncoming of a kind of glassy eye, and an extremely drawn look around the jaw and cheeks, and even a sort of dropping of the muscles of control of the jaw and mouth . . . if you saw him close, you could see that his hands were weak. . . . When he fainted, as he did occasionally, that was all accentuated. It would be very brief, and he’d be back again.”[3]

And this apparently wasn’t just the occasional “bad day” for the POTUS, because as former Democratic national chairman Jim Farley remarked : “From the time of his return from Teheran in December, 1943 there were disturbing reports about Roosevelt’s health. Hundreds of persons, high and low, reported to me that he looked bad, his mind wandered, his hands shook, his jaw sagged and he tired easily. Almost everyone who came in had some story about the President’s health—directly or indirectly—from any one of various doctors who examined him. . . . Members of the Cabinet, senators, congressmen, members of the White House staff, various Federal officials and newspapermen carried a variety of reports on the President’s failing health.”[4]

Because of his declining health, FDR would choose to spend long periods away from Washington, a month at Bernhard Baruch’s estate and a lengthy voyage to Hawaii among other things, and he would be under doctors’ orders to sleep as much as possible, working no more than 4 hours a day.

As we move forward, to the actual Yalta conference, things certainly didn’t seem to shape up for FDR. Churchill’s doctor Lord Moran, present at the conference wrote, that “to a doctor’s eye, the President appears a sick man… he sat looking straight ahead with his mouth open, as if he wasn’t taking things in”.[5]

A view corroborated by Sir Alexander Cadogan of the British Foreign office who remarked: “Whenever FDR was called on to preside over any meeting, he failed to make any attempt to grip it or guide it, and sat generally speechless, or, if he made any intervention, it was generally completely irrelevant.”[5]

Among the many irrelevancies uttered by FDR at Yalta, Stanton Evans found the following curious exchange with Stalin concerning FDR’s next meeting with Ibn Saud later edited out of the record.

“MARSHALL STALIN then said he thought more time was needed to consider and finish the business of the conference.
THE PRESIDENT answered that he had three Kings waiting for him in the Near East, including Ibn Saud
MARSHALL STALIN asked whether the President intended to make any concessions to Ibn Saud.
THE PRESIDENT replied that there was only one concession he thought he might offer and that was to give him the six million jews in the united states.”[6]

Now, I am not a historian so this may not at all be what it seems, namely the utter failure of FDR to perform the most elementary duties to his country. Come to think of it, it may be part of what established historians like Conrad Black call “masterpieces of pure, Great Power grand strategy, not flawlessly executed, but brilliant in conception, execution, and result all the same.”

34 thoughts on “The Court Historian Has No Clothes”