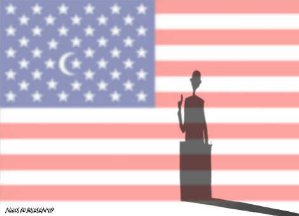 Nonie Darwish has published an evaluation of the Obama presidency, “Obama’s True Legacy: Not Healthcare”, at FrontPage Magazine. Some excerpts are below:

Even though President Obama always said that Afghanistan was the good war that we should fight, his true intention was to withdraw from Afghanistan. This has been confirmed in Robert Gates’ new memoir, “Duty: Memoirs of a Secretary at War,” in which the former Secretary of Defense demonstrates that Obama does not believe in his own strategy regarding the Afghan war and that the president always just wanted to extricate America out of the conflict.

Forcing America out of Afghanistan was what all Arab and Islamic countries have hoped to achieve. Muslims have zero tolerance for infidel foreigners on Muslim land, even if the land

Obama appears to be unsettled and torn in his decision-making process; a dangerous characteristic for any leader. That is probably the reason why his Affordable Care Act was a disaster — because, with Obama, there is often a gap between what he wants and what he does. We are told over and over again that Obamacare was the president’s signature legislation, but could it be that Obamacare is just like the president’s Afghan strategy, in which Obama says one thing, but does not really have his heart in his words?

What exactly is Obama’s true passion?

A signature legislation should take the full attention of the president in terms of crossing the t’s and dotting the i’s. It is what every president oversees at every step to avoid any embarrassment, especially if such legislation was passed without a single vote from the opposing party. Even though health care has always been central to the agenda of the Democratic Party, it does not appear to be number one on Obama’s mind because he totally relied on others to create and oversee Obamacare. However, he did appear very invested in it and rushed it through Congress by totally relying on Nancy Pelosi, who was the one who appeared to have true passion for it. Obama gave her total authority even to make ridiculous statements like “But we have to pass the bill so that you can find out what is in it.” Obamacare served to keep Obama’s core supporters happy and hypnotized. Even though Obamacare has turned out to be a disaster, Obama’s supporters have never publicly acknowledged how Obama has failed them with such a defective product.

Only Obama, the first black president, could get away with such deception of his own constituents. Up to the Obama presidency, a high level of insincerity, double talk and deception were rarely an acceptable characteristic of American leaders. Americans understood the consequences to cultures that are tolerant to lying. Habitual tolerance to lying is a major reason why Banana Republics are economic and political basket cases where citizens have no problem with lying unless it hurts them personally.

Some leaders in the Arab world are especially prone to lying out of necessity. They must lie often because they live in a twisted world where truth is penalized and lies are embraced as the honorable thing to do. Every Arab leader understands that assassinations, coup d’etats and revolutions are not only a way of life, but often legal.

While Arab leaders are forced to lie to literally save their necks, Obama is using this insincere strategy for convenience. Why is he saying one thing and doing another? What leads him to consistently tell lies to the American people? Could it be that he knows he can get away with it?

Read the rest at FrontPage Magazine.