I was able to get into my Gmail account yesterday. I don’t know why it gets blocked sometimes, but it does. And since Google is rather like the Internal Revenue Service or Kafka’s Castle, one doesn’t protest – it is simply how thing are. Google giveth and Google taketh away, blessed be Google…

While the page was still open I spied a newsletter from Red State, a website that most conservative Americans know. The editor is Erick Erickson and his essay yesterday almost exactly described my own anticipatory sentiments about the State of the Union address our current president will be reading from his two teleprompters tonight:

Aside from some syntactical differences and his references to people I don’t know his essay is an almost exact summation of my reasons for joining him in avoiding the kabuki theatre tonight in this latest edition of the President’s State of the Union speech.

…I am not sure if I will watch the State of the Union address.

A thin-skinned amateur who has been in office six years and still can’t grasp how to do his job will stand before an even more thin skinned Parliament of Whores and tell them he does not need them, while knowing he really does need them, while none of them truly want to be with each other, and all have lawyers ready to go bow before the black-robed masters who’ll sit stone faced at the front of room knowing they really rule the joint.

My only hope is that the Republicans grow a pair and start laughing uncontrollably when the President begins touting ObamaCare, which you know he will do and which you know they will not. Paging Steve Stockman — here’s your moment.

The State of the Union has become a pointless bit of laundry list stagecrap where everyone in D.C. gets to pretend they like each other and together will make magic before leaking how they hate each other and won’t get anything done worthwhile.

And you know what? I’m cool with that. I’d rather board up the whole place than have the Parliament of Whores and Captain Bulls— come together with their favorite johns from K Street and Wall Street and enact Operation BOHICA on Main Street and the Middle Class.

And The Rich. Don’t forget them – the Conservative Rich or the Apolitical Rich, not the Mega Rich who give to the Political Class.

As always, progressives are keeping a sharp watch out for any uppity conservatives who might, just might get out of line and poke fun at the Thin-Skinned One. Thus HuffPo’s gimlet eye spotted the poster below, done by Oleg at the People’s Cube:. 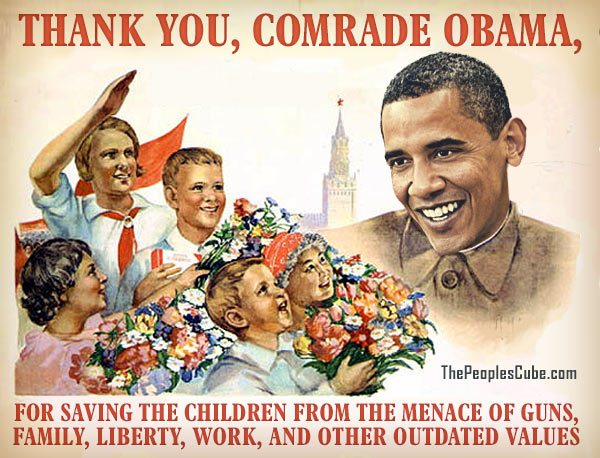 This pretty picture was being used by someone else – see Oleg’s explanation here – and for those Puff Hos it’s evidence for their claim to have discovered that the People’s Cube is in cahoots with the uber-rich, uber-conservative Evil Koch Brothers. Hmmm…this won’t be the first time a progressive banged its punkin head against reality and came away dented and confused. And wrong. But simple things like evidence-based falsity never stops those who draw their conclusions from how they’d like reality to be, rather than what it is. When knocked to the ground by the facts, these folks just climb back on their unicorns and continue on down the Road of Good Intentions, because meaning well is equal to or better than doing good in their strange moral calculus.

But I digress. The subject, sadly enough, is still tonight’s State of the Union Address by our very own Nobel Peace Prize President as seen from the perspective of Erick Erickson (and derivately, by me since I wish I’d written this and still suspect he’s been reading my mail):

The only people who can get ahead in Barack Obama and the GOP Establishment’s Washington are those who already have the deep pockets buy off Congress and the President. Neither party has a vested interest in changing it. But at least the GOP, for what little good it does these days, will tap the brakes on the joy ride to Gomorrah.

I truly hope you people are ready to go on offense. Instead of being defensive and hoping to get the GOP in control of the Senate, we need to go on offense and get control of the GOP itself. That’s the only way to turn the tide and it must be done by getting involved in your local party and by picking challengers across the country who you are willing to pray for, write checks for, knock on doors for, and fight for. Beat the GOP in primaries then storm through to the general election.

This State of the Union, like Washington itself, promises to be soul sucking gamesmanship made only worse by having to suffer through the GOP response by somebody who will, regardless of the person, look like a deer in headlights and sound like snoring. They’ll promise to repeal ObamaCare and start over. You should laugh. That’s the punch-you-in-the-face-and-beg-you-for-cash line.

Oh wait – I know that line. The latest example is our First Lady’s Begging Bowl, which she has polished up, purportedly to “help” ObamaCare:

Earlier this month, because of what you did, it became illegal for insurance companies to discriminate against the up to 129 million Americans living with pre-existing conditions. Young Americans are able to stay on their parents’ health care plans as they get on their feet, and we can now know that our insurance companies won’t put lifetime caps on our coverage.

You should be so proud of that. That happened because you organized, you talked to your friends and neighbors, and you chipped in what you could, when you could, to elect Barack and a Congress who supported his agenda.
Today, I’m asking you to do it again.

So before Barack gives his State of the Union address tomorrow, chip in $10 or more and help protect ObamaCare:

Thank you so much,

Isn’t that touching? Help Obama Care by putting your money on the Democrats who are running for re-election with the albatross of this demonic “Affordable” “Care” Act hanging from their necks. Let’s see how many of them ask their Fearless Leader to show up and shill appear with them on the hustings. I mean aside from the Black Caucus members.