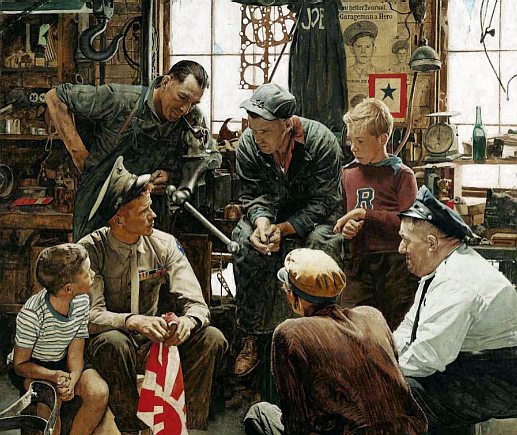 The above scene was painted by Norman Rockwell in late 1945, just after the end of World War Two. It depicts the homecoming of a U.S. Marine, who has returned from the Pacific with a captured Japanese flag and now commands the rapt attention of his listeners in a local garage.

The painting represents a time — within living memory, although just barely — when there was still a commonly understood ideal of what it meant to be an American. More honored in the breach than in the observance, perhaps, but nevertheless a generally accepted cultural norm of civic obligation.

The moment was before my time, but only by a decade or so. In my early childhood that view of America remained predominant. Those little boys in the picture were the young men of my time, and the returning servicemen were the fathers of kids like me. What Norman Rockwell presented in that painting and innumerable others was American normalcy, as we all understood it. Yet it might as well have been the time of the Peloponnesian War, for all the relevance it holds in what passes for today’s civic culture.

By the 1970s Norman Rockwell was discredited in the eyes of cultural arbiters in the media and academia. He was dismissed as a hackneyed, jingoistic nostalgia-peddler, an archaic throwback in a time when the most respected artists included Pablo Picasso and Jackson Pollock.

Centuries from now, when the foolish political and social fads of our time are long forgotten, Mr. Rockwell will be regarded with the respect he deserves. Like Rembrandt, he had an uncanny genius for depicting the human form and face in a way that conveyed a reality that the camera could not capture. He will be recognized as one of the great painters of our age — assuming, of course, that we have not by then become an American Emirate in the new Universal Caliphate, with all the graven images of our wretched jahiliyyah faithfully destroyed.

The cultural norms and ideals represented in Mr. Rockwell’s paintings were discarded along with his art. But this was true only within the lofty eyries of our cultural mandarins — he remains perennially popular among ordinary Americans, who revere his work as a reminder of what once was, but is now gone. The memory of the old culture still lingers in flyover country, even as it is deprecated, despised, and destroyed by the post-modern managers of the country formerly known as the United States of America.

For decades after most of the rest of the culture fell, the U.S. military remained a staunch bastion of the old ways. As the battering rams and siege engines of the long march broke down the walls of successive institutions — the media, academia, the public schools, commercial enterprises, the government — the military retained the spirit that was so lovingly chronicled by Norman Rockwell fifty years previously. The armed services functioned as a repository for our civic virtues.

All that has changed, thanks to deliberate, cynical policies implemented by the Obama administration. The top brass in all three services are now more concerned with putting women into combat and salving the feelings of their Muslim enemies than they are with their country’s ability to win a war.

The last walls of the citadel have been breached, and the barbarians are busily looting the storehouses and armories of the inner courtyard.

Article VI Section 3 of the United States Constitution requires the following of citizens who hold elected or appointed office:

The Senators and Representatives before mentioned, and the Members of the several State Legislatures, and all executive and judicial Officers, both of the United States and of the several States, shall be bound by Oath or Affirmation, to support this Constitution; but no religious Test shall ever be required as a Qualification to any Office or public Trust under the United States.

The wording of the required oath is specified under Title V § 3331 of the United States Code:

An individual, except the President, elected or appointed to an office of honor or profit in the civil service or uniformed services, shall take the following oath:

“I, AB, do solemnly swear (or affirm) that I will support and defend the Constitution of the United States against all enemies, foreign and domestic; that I will bear true faith and allegiance to the same; that I take this obligation freely, without any mental reservation or purpose of evasion; and that I will well and faithfully discharge the duties of the office on which I am about to enter. So help me God.”

Every officer in the United States Military took that oath. The time will soon arrive when a serving officer will have to choose between keeping his oath and pursuing a comfortable career track in his chosen service.

I don’t envy the lot of a dedicated soldier right now. Maybe that’s why the attrition rate in the armed services is so high — honorable people are making the decision not to re-enlist rather than be a party to the unfolding travesty. Their collective departure leaves the field to ambitious cynics and opportunists.

Things were bad enough when the Pentagon decided that soldiers in Afghanistan had to treat the Koran with greater reverence than they treated the Bible. The situation deteriorated further when the brass ordered officers in the field to be more concerned with maintaining good community relations with the locals — some of whom were actively aiding the enemy — than with the lives of their own men.

Our government reached a new low, however, when it began to collaborate with Al Qaeda and its affiliates in Libya and Syria. The current president’s predecessor identified Al Qaeda as the enemy, but Barack Hussein Obama appears to have different ideas. Unfortunately, even if he doesn’t consider them to be our enemy, the mujahideen in the Maghreb have no doubt they are at war with us. They are manifestly enemies both foreign and domestic — the latter in a more subtle, suave, and dangerous form as infiltrators working for the Muslim Brotherhood. Aiding and abetting these enemies does not support and defend the Constitution of the United States.

Under such circumstances, how can a conscientious soldier both honor his oath and obey his superiors?

This is hardly first time in our history that patriotic soldiers have faced such a dilemma. In 1776 George Washington had to decide which he loved more: his homeland and his ancient liberties as an Englishman on the one hand, or his duty to his sovereign on the other. If events had gone differently at Yorktown, he would have been hanged for his treason to the Crown. During those same years many other principled men made the opposite choice and remained loyal to the king. As a result our young nation was riven by deep internal conflicts for decades afterwards.

Or consider Thomas Jonathan “Stonewall” Jackson, who in 1861 had to choose between loyalty to his homeland — the Sovereign Commonwealth of Virginia — and loyalty to a federal government that had ceased to respect the sovereignty of his State. He chose the former. Like many others at the time, his choice divided his family, since his sister was a staunch Unionist. Ironically, the county where he was born and grew up ceased to be part of Virginia during the war, opting instead to secede and join the new state of West Virginia.

Another such hinge of history seems to be at hand. Difficult times lie ahead.

If some form of economic collapse occurs — which hardly seems avoidable at this point — serving members of the military may be called upon to quell the resulting civil unrest. How can a soldier honor his oath when ordered to fire upon his fellow citizens?

Our public institutions have been so corrupted and degraded that we can hardly depend on them to make the right decisions about the constitutionality of such actions. Over the past twenty or thirty years all three institutional guardians — the Executive, the Congress, and the Supreme Court — have displayed a blatant disregard for the clear requirements of the United States Constitution.

An honorable soldier will simply have to follow his own conscience to make the choices necessary to fulfill his oath.

I wouldn’t want to be in his shoes when the time comes. God help us all.