As we reported last month, Elisabeth Sabaditsch-Wolff has exhausted all avenues of appeal within the Austrian “justice” system. Her final appeal will be heard in the European Court of Human Rights.

Below is an article about the case that was published earlier this month in an Austrian newspaper. Elisabeth sends this introduction to accompany the translation:

The march through the Austrian court system has finally come to a conclusion, though not in the way we free speech activists had wished for the struggle to end. Free speech has died, and with it our right to criticize an ideology that masquerades as a religion while reaping the benefits, both material and spiritual, of the Austrian state. 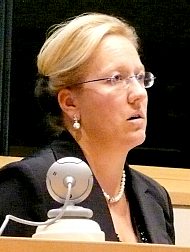 Just a reminder to the readers:

Islam, along with Christianity of all denominations, Jehovah’s Witnesses, Judaism, and Buddhism, has been a “legally recognized religion” in Austria since 1912. This entails the state, i.e. the taxpayer, shouldering the burden of religious education in schools and provides special tax breaks, among many other perks.

In order to achieve legal recognition, a religion must prove that its teachings are compatible with the precepts of the law. This is ideally done by providing the representative of the state (the minister of culture) with a translated copy of the religious teachings. All religious groups with legal status in Austria have done so; only one has not. Want to venture a guess as to which religious groups has been in arrears until this day?

As a result of this Law on Islam, one may not criticize religious teachings, even if the authorities do not know the contents of the Koran, the Sunna or the Sira, all of which make up Islam. And as a result, a conviction of “denigrating the religious teachings of a legally recognized religion” with respect to Islam constitutes enforcement of Sharia Law by the Austrian judiciary, even if they are unaware of this fact.

This is what occurred in my case. Back in late 2009, my seminars on Islam were infiltrated by a young (female) journalist and surreptitiously recorded. I was later reported to the authorities, who decided to put me on trial.

It is important to remember that there was never any victim, never anyone who felt any insult, no Muslims who complained, no imam who denounced what I had said. It was the state that took the case up in lieu of Muslims who “might be offended”. Offended by my simply stating the words of the Koran and the Sunna and musing about what these words might mean in the early 21st century in light of Koran 33:21, a verse that calls Mohammed Al Insan al Kamil, the man to be emulated by all devout Muslims for all times. That is what the Austrian legal system calls “denigration of religious teachings”; that is, it recognizes Mohammed’s marriage and consummation of his marriage to Aisha when she was six and nine, respectively. This behavior— which is to be emulated and is being emulated every single day as evidenced by news stories reporting the deaths of nine-year-olds after giving birth — will always be unacceptable.

The freedom to call a spade a spade must not be infringed due to religious laws and sensitivities. Laws gagging free speech must be repealed here in the European Union. I still dream of a European-style First Amendment that will allow us to speak our minds. Yet I realize that there is a long way to go; we haven’t even begun comprehending the magnitude of losing the right to free speech.

Do a survey on your own in the streets here in Europe. I am certain that most people will say: “Well, you should not have said what you said. If you had shut up, you wouldn’t have been in trouble. And anyway, you can’t say it that way.” As my lawyer rightly argued all the way to the Supreme Court, you may not like what I said, but I must have the right to say it. Free speech means saying things that may shock someone. Free speech is not necessary so that citizens may hear speeches by the president or the weather forecast.

To sum up: after fighting for nearly four years all legal possibilities have now been exhausted — unsuccessfully. My case has been pending at the European Court for Human Rights in Strasburg since February 2012, and will set an important precedent for the freedom to criticize religions and/or religiously-sanctioned conduct.

One final note: I will never cease fighting for my God-given right to free speech. Religious sensitivities must never trump freedom of speech.

Elisabeth Sabaditsch-Wolff was convicted after a seminar given at the academy of the FPÖ (Austrian Freedom Party). The OGH (Supreme Court) denies a new trial.

The Supreme Court has denied Elisabeth Sabaditsch-Wolff’s application for a new trial. Sabaditsch-Wolff was fined €480 for denigration of religious teachings, because she had spoken disparagingly of the Prophet Mohammed.

In a seminar for young voters, Sabaditsch-Wolff is said have credited the Prophet Mohammed with “going through a fair number of women” and let the impression come through that he “had a thing for children” — noting that his third wife, in line with Islamic tradition, was reportedly six years old when he married her and nine when the marriage was consummated.

Sabaditsch-Wolff was sentenced to a fine of €480 in the Viennese Provincial Criminal Court in February 2011 for denigration of religious teachings, but acquitted of hate speech. The Viennese Appeals Court confirmed the conviction in December 2011. At that time, the defendant announced her intention to fight for the freedom of expression “to the very end.”

In a decision announced on Wednesday, the Supreme Court has denied the appeal. Grounds are that “the required weighing of interests spoke for the protection of religious feelings of others according to Article 9 MRK” (European Human /Rights Convention).

Attorney: “We Will Appeal the Decision”

Sabaditsch-Wolff’s attorney, Michael Rami, declared: “We are already prepared to fight the decision of the Appeals Court at the European Court on Human Rights and will fight this one too.” To date, there is no decision at the European Court, nor can it be estimated when the case will be heard, says Rami.

“It is not a question of whether the statements are considered good or bad, but whether it is legally permissible to say such things.” The basic right to freedom of expression, said the attorney, covers “also and specifically statements that are shocking.” The attorney noted that Sabaditsch-Wolff’s statements were “factually based.”