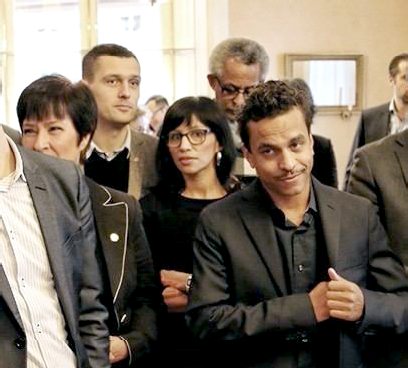 Readers who follow Scandinavian affairs will be aware of the recent scandal surrounding Jason Michael Bosak Diakité, a.k.a. “Timbuktu”. Mr. Diakité, a rap singer born in Sweden of US-Malian parents, caused an uproar when he and his rap partner recorded a song containing intemperate lyrics about the leader of the Sweden Democrats.

As The Local reported last week:

Lyrics interpreted as an invite to assault the anti-immigration Sweden Democrat leader have caused a political stir, prompting the speaker of parliament to boycott a Riksdag ceremony where singer Jason Diakité, also known as Timbuktu, will receive an anti-racism award.

Diakité recorded the song Black Doves And Wilted Lilies (‘Svarta duvor och vissna liljor’) with the hip-hop group Kartellen. It contains the phrase “Jimmie blue and yellow, hoist him on the flagpole”, in reference to the leader of the Sweden Democrat party, which has long been seen as a one-issue party wanting to curb migration to Sweden.

In the eyes of many Sweden Democrats, Timbuktu’s choice of lyrics were not just controversial, but offensive and illegal. Gabriella Hedarv, a columnist in the party’s own paper SD-kuriren, said Timbuktu should be stripped of the honour of singing at the Nobel Peace Prize ceremony in Oslo next week as he “threatens the life of democratically elected politicians”.

Jimmie Åkesson, the leader of the Sweden Democrats, reported Mr. Diakité to the police. I’m also told that certain of the most inflammatory lyrics were edited out of later releases of his song. 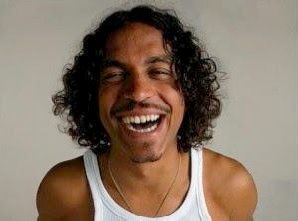 Sweden, Baby, is a Boulevard of Broken Dreams
by Da Capo

I am not a literary or poetry-analyzing person. I have only my common sense, and with the best will in the world I cannot perceive or understand this ‘poetic drapa’ (drapa = ancient Icelandic, Norse poetry) as anything but a very critical and denunciative text that altogether condemns the state of affairs in New Sweden — that is the result of more than forty years of Cultural Marxist maladministration under both socialistic and borgerlig (= conservative/liberal) rule.

You have all by now perhaps heard about the total failure of the Swedish schooling system, now the sixth from the bottom of the international PISA comparison.

Given that the concept of beating someone ‘yellow and blue’ – also the colors of the Swedish flag — is a stock phrase, one can perhaps venture to say that there is a bit of humor in the text.

However, it is only this line in the ‘poem’ about hoisting the SD leader on the flag pole that has been widely debated. It has been damned by Sweden Democrats and so-called Sweden-friends (ca. 10% of the electorate), and with concealed enthusiasm approved of by the minority of the rest — that is, those who are not notoriously and constantly sleep-ambulating.

Listen to the song here.

Palme had a neck shot, SD got a jackpot,
people have become cigarette butts in Anders Borg’s[1] ashtray,
f***ed, they plowed the welfare with a tractor,
left us with poor education and a s****y health care,
and the whip keeps whining until we are horse-trotting,
banging Jimmie yellow and blue, hoisting him on a flagpole,
the country we now live in is f***ing more crooked than the king,
Set off to Djursholm[2] and ask the most colorful kid,
from the frying pan to the first, no playgrounds and no swings,
stone throwing mobs and oblique prattling tongues[3],
Mother Svea has become icy-cold, words to SMHI[4],
give it another 20 winters and then we’ll understand
Social Democracy, Alexander Bard’s[5] idiocy,
your everyday life as a new neo-liberal slave isn’t it sitting fine,
Sweden, baby, is a boulevard of broken dreams,
and what it once was, they f***ing want you to forget. 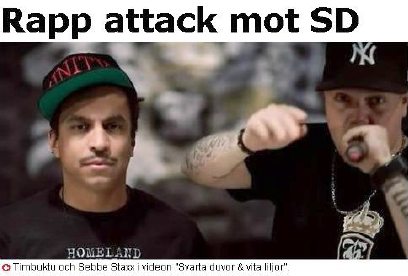 The 4 minutes and 50 seconds of video — consisting of mainly aberrant, distasteful, unintelligent crap — ends with the call: F*** Jimmie Åkesson!

The other individual in the video clip is a convicted former criminal by the name of Sebbe Staxx.

Timbuktu wins prize. Wednesday, 4 December, the ‘5to12’ movement’ held its “Annual National manifestation day against xenophobia and racism” in the Parliament.

Operations included the awarding of a prize, which this year goes to Jason Michael Diakité Bosak or Timbuktu. This despite the fact that the artist in question recently allied himself with the criminal and violent group Kartell, led by a notorious former criminal called Sebbe Staxx.

The prize is awarded by the 5to12 movement’s chairman Jasenko Omanovic (Socialist, from former Yugoslavia), who does not see any problem with the prize winner. Jason actually received the award already last year, but has not been able to collect it until now.

Jason or Timbuktu will perform at the Nobel Peace Prize concert in Oslo on December 11, and the Norwegian Nobel Committee secretary Geir Lundestad says to Swedish Television that the song does not seem to be Timbuktu’s “smartest song”.

While Jimmie Åkesson, the leader of the Sweden Democrats, is excluded from the Nobel banquet in Sweden with references to Nobel’s will, the official stance in Norway is that you cannot require adjustment by an artist to meet certain moral ideals.

The most enthusiastic and a true fan and friend of Jason is the former chairman of the Barbie Club of Sweden and also the “Queen” of Social Democrats in Sweden: Mona Sahlin. Her admiration for Jason knows no bounds, and she gets teary-eyed when she thinks about what good people they are, both of them, she and he. Consider that she could once have become Prime Minister in one of the world’s stupidest countries (Kretinostan, a.k.a. New Sweden). 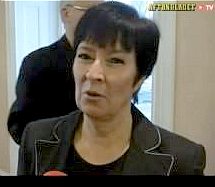 Among other wise things, Jason said:

“I demand to feel safe in Sweden.”

“I demand to have access to the work that my qualifications entitle me.”

“I demand access to housing that is sufficient to my income.”

“I demand to pray to the god I want, and to love the person I want.”

“I demand the freedom to speak, even from those who disagree with my ideas.”

“And I demand to be seen as a part of this community.”

4 thoughts on “Sweden, Baby, is a Boulevard of Broken Dreams”