A reader and commenter named ManoftheWest sends an excerpt from an account of the reign of Ethelred the Unready, and includes the following introductory note:

My wife recently picked up a copy of Our Island Story by Henrietta Elizabeth Marshall, originally published in 1905 and reprinted in recent years by Civitas, for whom Douglas Murray works.

When we read the attached section on the reign of Ethelred the Unready we both thought Gates of Vienna readers (especially those from the Isle of Albion) would appreciate the same resonances with our situation today as we did. I have let it speak for itself without any additional comment or interpretation from me.

[Note: The nickname “Ethelred the Unready” is derived from the Old English Æþelræd Unræd. The phrase was a pun on Ethelred’s name, which meant “noble-advised” in Anglo-Saxon. Unræd meant the opposite, “ill-advised”, so that the sardonic soubriquet for the king was “Noble-Advised the Ill-Advised”. The translation of Unræd as “Unready” is an error; the Anglo-Saxon word for “ready” was ræde, which may be a distant cognate of ræd, but bears a different meaning.]

The excerpt from Our Island Story, which was intended to be read by children:

In the Reign of Ethelred the Unready

Year by year the Danes were becoming more powerful in England. They not only came and went in their ships, but many more of them settled in the country. They made their homes in England and forgot about their own homes in Denmark. That would not have mattered much, if they had become good English subjects, willing to obey an English king. But that is what they did not do. Instead, they rebelled always against the king, and so wars and fighting went on. 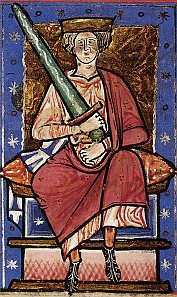 Now you shall hear about the last of the “boy kings”. His name was Ethelred, and because he was foolish and slow, he was also called the Unready. He lived about a hundred years after Alfred.

In his reign everything seemed to go wrong. The Danes soon found out what a foolish man he was, and they came in greater numbers than ever. Ethelred had not spirit enough to be a good leader. He was never sure of what he wanted to do, so his soldiers lost heart and his captains quarrelled among themselves.

He built ships, but they were shattered by storms. The city of London caught fire by accident and was burnt to the ground. Everywhere there was misery and misfortune.

Then Ethelred thought of an unhappy plan for ridding the country of the Danes. He said to them, “I will give you a large sum of money if you will go away.”

The Danes, of course, were delighted at the idea of getting money so easily, and they gladly promised. Ethelred gave them the gold, and they sailed away and the English people rejoiced.

But the Danes, as you know, were never careful about keeping their promises. They went home, it is true, but when they had spent all the money which Ethelred had given them, they said, “Let us go to England again and rob the people. Perhaps their foolish king will give us more money.”

And so they sailed to England. Ethelred again gave them money to go back to Denmark; once again they sailed away, but when the money was spent, once more they returned.

Over and over again the same thing happened, Ethelred always giving the Danes larger and larger sums, for they grew more and more greedy when they saw how easy it was to make the foolish English king give them money.

How did Ethelred get all the money which he gave to the Danes? Was it his own? No. In order to get the money, Ethelred taxed the people, that is, he made each person pay a certain sum every year, and this was called Danegelt or Danemoney.

The English were already accustomed to pay taxes for various things, and at first they did not mind paying this new one. Indeed they were glad to do it, in the hope of getting rid of their terrible enemies. But when the Danes returned time after time, when year by year the tax grew heavier and heavier, the people grew weary of it, and angry.

“We strive and toil” they said, “to earn money, that we may live in peace and comfort, but it is of no use. The king takes our money and gives it to these idle pagans. We will work and pay no more.” So the people grew moody, and the country was in greater misery than before.

Then Ethelred thought of another plan to get rid of the Danes. This plan was both terrible and wicked.

He sent messengers into every part of England, telling the English that, on the 13th November, they were to kill all the Danes, men, women and children…

…And the most dreadful thing is that Englishmen all over the country were found willing to carry out the cruel order. Yet we must not think too hardly of these old Englishmen, for they had suffered so much from the Danes that it was little wonder that they hated them.

Even those Danes, who were living peaceably in England, were so proud and haughty that the English hated them. They always thought they should have the best of everything, they expected to be called “Lord Dane”, they treated the English like slaves, and if an Englishman and a Dane met in a narrow passage or on a bridge, the Englishman had to go back until, “my Lord Dane” had passed.

So when 13th November came, the Englishmen rose and slaughtered the Danes, every one, man, woman and child, rich and poor, high and low. None were saved.

14 thoughts on “Getting Rid of the Danes”