The International Civil Liberties Alliance (ICLA) recently launched a new initiative, the Victims of Sharia Action Network (VOSAN), to promote action on behalf of the millions of people victimized by sharia. 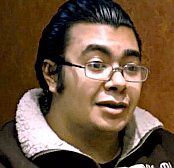 VOSAN’s first publicized case is that of Bishoy Armiya, an Egyptian apostate from Islam who converted to Christianity and is now in prison.

Below is ICLA’s overview of the case, including recommended actions for supporters of Mr. Armiya, and a sample letter to the Egyptian ambassador in London.

Report from: Voice of the Copts.

Background to the Case: Bishoy Armiya (formerly Mohammed Hegazy) converted from Islam to Christianity. He sought to change his religious identity on his Egyptian ID card. An Egyptian court ruled that Sharia forbids anyone from leaving Islam. It is reported that Mr Armiya has suffered death threats, has been forced into hiding, has been tortured, and is now in prison for “contributing to a ‘false image’ that Christians in Minya are a target of violence.”

Goal: That Egyptian authorities release Bishoy Armiya from prison as soon as possible and prior to Eastern Christmas.

Action: The International Civil Liberties Alliance recommends activists to do the following:

You may take ideas from the letter below written on behalf of the International Civil Liberties Alliance and tailor them to your own letter:

His Excellency the Egyptian Ambassador

I write to you on behalf the human rights group the International Civil Liberties Alliance (ICLA) about the case of Mr Bishoy Armiya. It would appear that Mr Armiya was arrested on very tenuous charges and remains in custody without the prospect of a trial in the near future.

It would appear that the motivation for his arrest was his change of religion from Islam to Christianity. His treatment is therefore contrary to Article 18 of the Universal Declaration of Human Rights and is unbecoming of a great nation like Egypt. ICLA respectfully requests that you make representations with your home government on our behalf calling for the release of Mr Armiya in the interests of religious freedom.

We appreciate that your country is recovering from the legacy of the fanatical regime of the Muslim Brotherhood and we welcome the progress that your Government has made. We look forward to seeing an Egypt where human rights including freedom of religion are respected fully in your country.

On behalf of the International Civil Liberties Alliance.

One thought on “Bishoy Armiya — Victims of Sharia”