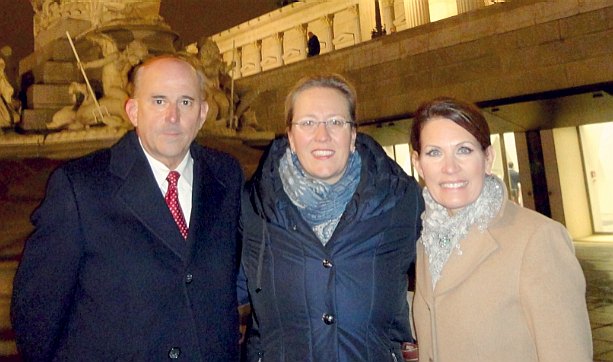 At the request of Representative Michele Bachmann (R-MN), Elisabeth Sabaditsch-Wolff met today in Vienna with a congressional delegation from the United States. In addition to Ms. Bachmann, Louie Gohmert (R-TX), Robert Pittenger (R-NC), and Steve King (R-IA) were present.

The private meeting took place this afternoon (early evening Austrian time) in a local Viennese coffeehouse. The American visitors had heard about Elisabeth’s case, and discussed it with her over Apfelstrudel, Sachertorte and Viennese coffee.

The congressmen and woman listened intently to what Elisabeth had to say. Rep. Bachmann was particularly concerned about the recent supreme court decision that upheld Elisabeth’s “hate speech” conviction.

“We don’t want this to happen in the USA,” said Ms. Bachmann. “Every American citizen has the right to express themselves. Everyone should have the security to speak.

“We are proud of you. You are a brave and unique person. God has given you a special gift to speak out.”

Rep. Gohmert and the other congressmen said they were appalled by the decision. 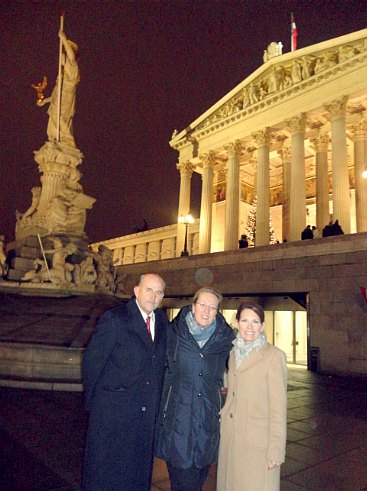 After the meeting, Rep. Bachmann told Elisabeth that meeting with her had been the highlight of her visit to Vienna. Then Elisabeth walked the American delegation to their next meeting with Austrian MPs. The American representatives said they were anxious to discuss the case with their Austrian counterparts.

26 thoughts on “Appointment in Vienna”