The conviction of a Royal Marines commando for killing an irregular non-uniformed Taliban guerilla has caused a lot of controversy, both in the UK and abroad. Our English correspondent Seneca III has some choice words to say on the matter.

A Day of Infamy
by Seneca III

I speak now as an ex-Royal Marine and stand prepared to have my comments in this post judged accordingly. 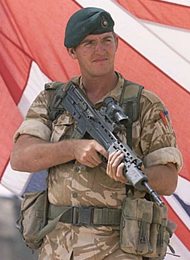 Yesterday, 6th December 2013, Sergeant Alexander Blackman, 39, a Royal Marines Commando who has given fifteen years of dangerous, selfless service, much of it in Iraq and Afghanistan ,was jailed for life and will have to serve at least ten years before being eligible for parole for killing a wounded, non-uniformed Taliban on the battlefield in contravention of the terms of the (First) Geneva Convention, specifically concerning “…the treatment of wounded and sick armed forces in the field”, although the actual Courts Martial charge was one of murder.

As the media are and have been covering the background to and the actual circumstances of this case in substantial detail, and as the comments sections of the on-line media adequately reflect the feelings of the public at large, I do not intend to elaborate on the conviction, its ramifications, comparative sentencing or the definition of ‘armed forces’ here this day — British and allied GoV readers will have to make up their own minds and reflect upon their now and future position on this matter, but would be well advised to contemplate the words of Pastor Niemöller as they do so.

My personal response is simply this: The Judiciary, the Political Establishment that appointed them — and who may or may not have influenced the judgement and sentencing behind closed doors — together with the deconstructionist, Islam enabling chatterati cheering in the background, know all of you this; I WILL NOT FORGET THIS DAY NOR WILL I FORGIVE YOU THIS BETRAYAL — EVER.