Two interesting news stories, one from Prague and the other from Edinburgh, were sent in for the news feed on Thursday. Although they concern two totally different topics, they are connected by their relevance to the proposed new EU law for the enforcement of “tolerance”.

First, an update on that odious would-be law. Last week we posted a translated article from Germany about an ominous document known as The European Framework National Statute for the Promotion of Tolerance, which has been presented to the European Parliament.

‘The European Framework National Statute for the Promotion of Tolerance,’ was produced by The European Council on Tolerance and Reconciliation. This is a non-governmental organisation that has nothing to do with the European Union and doesn’t have any power to draft or introduce EU law.

The document was simply presented to the Parliament’s Civil Liberties Committee. However, this matter is NOT being discussed or considered by the European Parliament. This is NOT going to be European Union law.

I hope a correction will be published.

My blog about Europe: http://www.eu-rope.com

There will be no “correction”, since my take on the possibility that the “tolerance” law might be enacted by the European Commission and approved by the European Parliament is a statement of opinion, rather than an assertion of fact. I’m entitled to my opinion, and Mr. Danzig is entitled to his. Both are equally “correct”.

Henrik Ræder Clausen made the following response to Mr. Danzig, also in the comments:

Jon, the article doesn’t state that the document is under discussion in the European Parliament, merely that it has been published by the EP, which is technically correct. You may check the precise URL for verification.

As is well known, the European Parliament does not have the authority to actually propose law. Initiating law is the exclusive prerogative of the Commission, which may well take up this proposal and use it as a basis for new European law. The language of it sure suggests that it is intended to become law, sooner or later. The fact that the EP has considered it already does not lessen that possibility. The assertion in the article that it is ‘likely’ to become European law is the opinion of the editor here, and given that we already have dreadful EU law like the Framework decision on combating racism and xenophobia, it does not come across as implausible that this proposal will go through, in one form or another. Possibly modified by the Parliament based on ground work by the Commission.

I do not believe any correction of the article is needed. Your opinion stands in the comments as published, and as such constitutes a fine example of citizens discussion matters of importance to our future.

As for you ‘guarantee’ that this will not become European law, I certainly would not bet the future of my children and grandchildren on it. For if the Union continues down the path it is threading, I may need to teach them how to be a good dissident rather than a loyal Union Citizen adhering to the mandatory tolerance prescribed.

Now back to the news stories from Prague and Edinburgh.

It seems that the cultural enrichment of Prague has reached the stage where female students are insisting on their right to wear the hijab when attending classes, a process much more familiar to cities further west. Up until recently the Czech Republic seemed immune to the multicultural madness that results in such demands, but it has now become so PC-infected that a story such as this one can appear in the Prague Daily Monitor:

Prague, Nov 18 (CTK) — It is unfortunate that a Prague secondary nursing school rejected the request of its two students, Muslim girls, who asked for a permission to wear a headscarf in their classes, Tomas Brolik writes in weekly Respekt out yesterday.

The two girls then left the school on their own to study elsewhere. There was no drama, no extreme emotions, yet the case led to the first “hijab affair” in the Czech Republic, Brolik says.

But school rules are no wall of concrete and changing them would not be a display of cowardly concession to fundamental Islam, but merely standard responsiveness, Brolik writes.

He says using the school rules as an argument seems misplaced because the two girls did not ask for anything extreme. Some Muslim women simply consider it unbecoming not to wear a headscarf. Similarly, European women would feel unbecoming without a skirt, Brolik adds. [emphasis added]

Ah, yes. These Muslimas are not extreme, you see, so their demands are reasonable, and should be met. There aren’t very many Muslims in Prague yet, so a hijab here, a footbath there — that’s all the Czechs will need to worry about.

For a while. When the number of Muslims reaches, say, 8% of the population, the rules of the game will change. There will be no alternative to halal food in public schools. Swimming baths will offer gender-segregated bathing sessions. “Sharia zones” will be established in certain neighborhoods, and no-go areas will become a feature of urban life.

The crime rate will increase, of course. And Muslims will be disproportionately incarcerated for those crimes. But the politicians and talking heads on television will explain to the Czech people that the problem is due to their “racism” and “xenophobia”, rather to the behavior of the “New Czechs”. The police and judicial authorities will be seen as “discriminating” against Muslim citizens.

Czech lawmakers and civic authorities would be well-advised to take a fact-finding junket to Berlin, Munich, Stockholm, Oslo, Copenhagen, Glasgow, Birmingham, London, Rotterdam, Brussels, Paris, Marseille, or Vienna. Officials in those cities should be well-equipped to advise their Czech counterparts about what will be required of Prague in the years ahead.

Prague is the capital of a formerly sovereign nation that is now a vassal of the European Union. If the new Framework National Statute for the Promotion of Tolerance becomes law, the future outlined above will become mandatory for the Czech Republic.

Consider the following clauses of the “Tolerance” framework, Page 3-4, Section 3, Guaranties of rights:

Knowing the predisposition of “Tolerance” advocates, and drawing on the record of recent Islamization in Western Europe, it’s safe to say that the language of the above passages (especially the bolded keywords) will be cited to enforce a particular form of “tolerance” in Czech public institutions. Assuming that the framework becomes law, the newly-formed administrative/judicial body charged with implementation and enforcement will almost certainly determine that a ban on the wearing of hijab in class is a violation of Muslims’ right to religious freedom.

So the Czechs will become “tolerant”. Participation in the framework will be mandatory, not optional. Control over the standards used in Czech public institutions will pass from the institutions themselves, the relevant governmental ministries, and the national parliament to an unelected unaccountable bureaucratic entity in Brussels designed to function in an expressly totalitarian fashion.

The Prague end of the Axis of Tolerance exemplifies the imposition of EU dictates that remove any standards established at the local level. Instead they force certain uniform behaviors on the localities (“regions”) within the European Union. The enforcement of “Tolerance” demands that local bodies allow various behaviors that they would otherwise prohibit.

In contrast, the Edinburgh end of the Axis engages in precisely the opposite process: it prohibits practices that citizens would otherwise traditionally allow. Also in the name of “Tolerance”. 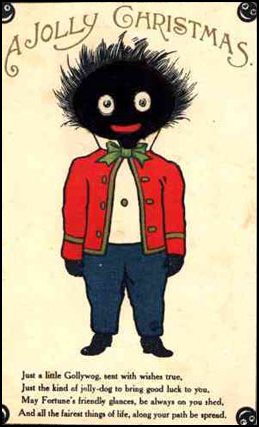 The case concerns a beloved children’s toy and icon: the golliwog.

The golliwog was devised in late-19th century England, and rapidly gained widespread popularity, eventually becoming a cultural icon. In recent years, because of its appearance — that of a cartoonish black person, deliberately depicted in the style of a traditional blackface minstrel — the golliwog has been deemed “racist”, and largely removed from the public square. In certain instances, British citizens who displayed golliwogs where they could be publicly seen were prosecuted for inciting racism. (See the Jim Crow Museum of Racist Memorabilia for more on the golliwog.)

Yet the golliwog is hardly derogatory of black people. Quite the opposite: in most stories and illustrations, the golliwog is a friendly, helpful, and even heroic figure. In that sense he resembles Black Pete (Zwarte Piet) in the Netherlands.

But the occult post-modern science of “racism” allows for no such subtle distinctions. White people created images of black people that look like caricatures, hence the images must be “racist”. No other conclusion is possible. Golliwogs must go!

The most recent eruption of golliwogiphobia occurred in Scotland, after a 76-year-old golliwog was discovered when an old primary school mural was cleaned up and restored. An alert citizen noticed the “racist” artifact and called the police.

According to The Herald:

Police are investigating a complaint about a mural in a primary school which features a golliwog.

The Alice in Wonderland painting in Wardie primary school, Edinburgh, is said to date back to 1936 and was recently restored with money from the Heritage Lottery Fund.

The golliwog is sitting on an alcove ledge above the Alice in Wonderland figure in the mural’s central panel.

It has emerged that a prospective parent lodged a complaint about the mural after seeing it while touring the school.

A spokesman said: “The Alice in Wonderland mural at Wardie primary school was painted in 1936 and is of both historical and artistic importance as evidenced by the fact it recently received full Heritage Lottery Funding support to restore the work.

“While we understand the offensiveness of the image, it is in no way indicative of the attitudes of either the school or the council.

“Our equalities policies and approaches are robustly multi-cultural and anti-racist, promoting diversity and good relationships among pupils.”

A Police Scotland spokeswoman said: “Police in Edinburgh have received a complaint in relation to a mural at a primary school in the Trinity area.

“Officers are now liaising with the City of Edinburgh Council education department with regards to this matter.

“Police Scotland treats all reports relating to hate incidents extremely seriously and will thoroughly investigate whenever a report of this nature is made.”

The spokesman quoted above displays the sensible attitude that neither the creators of the mural nor its current curators had any racist intentions. However, when a PC Inquisition is convened, neither intentions nor practical effects — nor indeed the facts themselves — are of any moment. If the merest whiff of “racism” is detected by anyone involved, the offensive item must be exterminated and the offenders punished to the fullest extent of the law.

Furthermore, in order to fully cleanse the public space of any taint of “racism”, the historical record itself must be revised. This is where the Edinburgh golliwog fits into the European Framework National Statute for the Promotion of Tolerance.

As you can see, the owners or promoters of historical materials deemed racist will be subject to criminal prosecution, even if the material in question was created by people who are long dead and aimed at a long-dead audience.

History must be rewritten. Those who do not act quickly enough to scrub away any vestige of “racism” and “xenophobia” from historical material must be prosecuted to the fullest extent of the new “inclusive” law.

And all in the name of Tolerance.

The above examples represent the most likely future shape of the European Union, one that will arrive sooner than most of us might think.

And Americans should not be complacent: the same sort of thing is being planned for us.

Not just Barack Obama, but Hillary Clinton, Joe Biden, Chris Christie, and all other major national political figures are Islamophilic to varying degrees, and have pledged to work with the OIC and other Muslim Brotherhood organizations in the struggle against “Islamophobia”. We can expect an initiative resembling the framework to appear here soon, presented by the United Nations as one of our treaty obligations.

7 thoughts on “The Prague-Edinburgh Axis”