As reported here last night, Swedish literati have recently given themselves the vapors over the supposedly “Nazi” cookies eaten by Finns at Christmas time. These julstjärnekakor are made in a pinwheel shape, which to suggestible and fevered minds looks like a swastika.

All this Swedish foofaraw is part of a larger craze for seeing swastikas where none are intended, or viewing harmless swastikas — such as those used as decorative motifs for thousands of years prior to 1922 — as ominous. It reminds me of a strange comic-strip fable by the legendary R. Crumb: 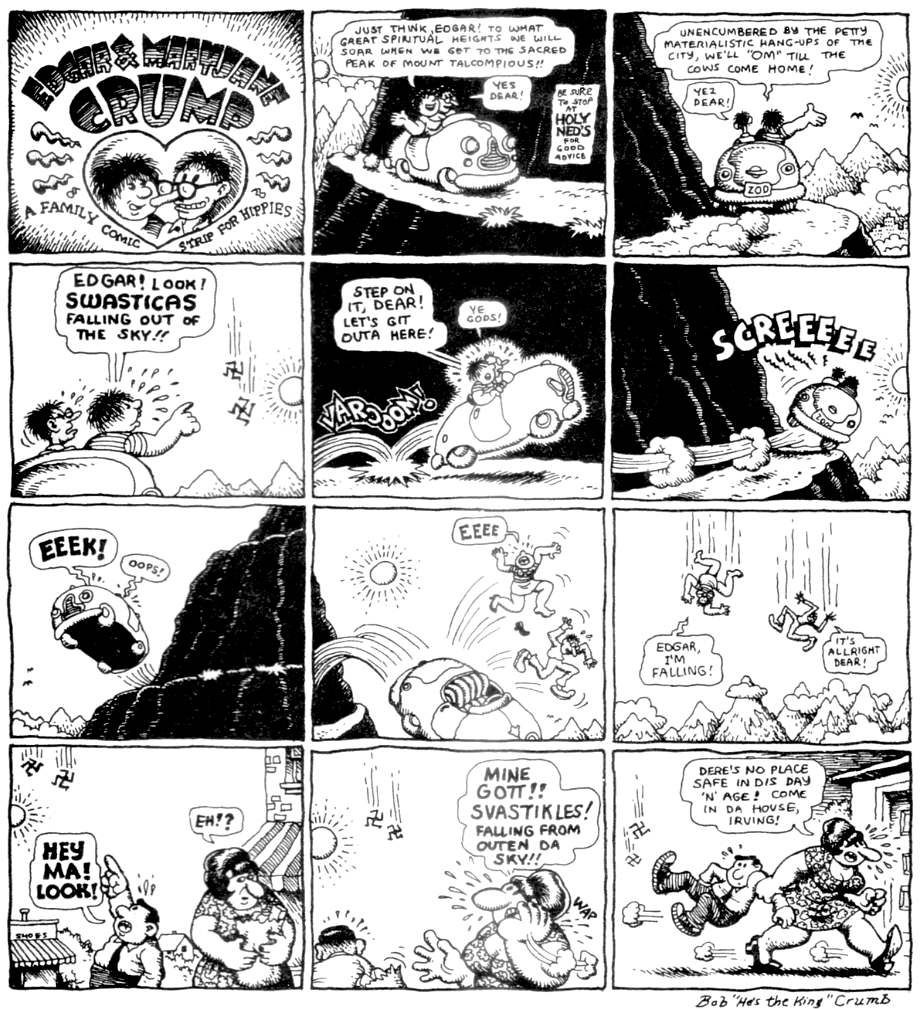 The above sequence was scanned from a ragged old copy of Despair comics, published by The Print Mint circa 1968 and sold for 50¢ at head shops, back when there were head shops.

Paging through Mr. Crumb’s oeuvre, it occurred to me that his career prospects today would not be as good as they were in San Francisco back in the late ’60s.

The rule for underground comics in those days was: “Anything goes”. The artists at the head of the field — including Crumb, Gilbert Shelton, S. Clay Wilson, Rick Griffin, Victor Moscoso, and others — were to various degrees racist, sexist, misogynistic, and homophobic, judged by the standards of the 21st century.

Robert Crumb was a virulent anti-feminist, and also used cartoonish racial stereotypes with abandon. The big-lipped half-naked heroine of his “Angelfood McSpade” series was naughty in ways that can’t even be described in a PG-13 environment like this one.

And then there was “Dale Steinberger, Jewish Cowgirl”, whose nemesis was a roller-skating blonde whitebread farm girl named Gloria Nord. The dénouement of their final confrontation was hilarious, but would not be allowed in any of today’s hip publications.

Most of that stuff could never be published at all on the Left Coast today, and it might even get the artists arrested for “hate speech”. Such are the times we live in.

In a San Francisco strangled by Political Correctness, R. Crumb would have to get with the program — or get out.