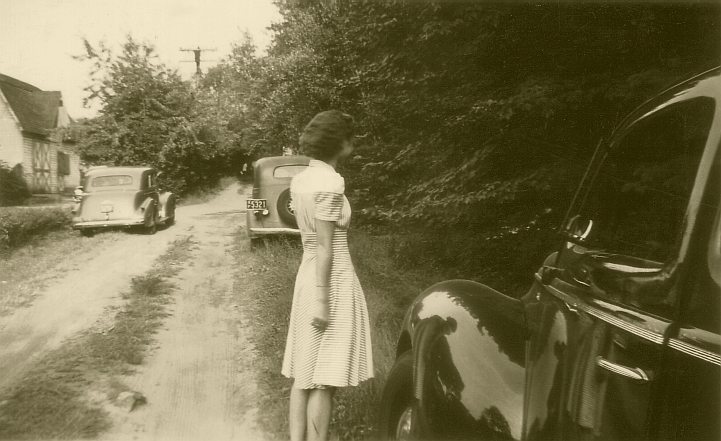 Fundraisers can be grueling at times — and not just for the readers!

If only the hundred-dollar bills would just drop out of the sky and land in our front yard, we wouldn’t have to keep pestering y’all.

Why can’t George Soros’ Open Society Institutes collect their pocket change and deliver a million or two in grant money to The Impoverished Counterjihadists of Central Virginia?

What are we, chopped liver?

No hope there. Instead, once a quarter we have to go through all of this, and so do you.

The theme of this fundraiser is “culture and traditions”. The second half of that phrase is apropos, since these periodic blegs have been an occasional feature at Gates of Vienna for seven years, and a quarterly event for more than four. That makes them an official tradition at Schloss Bodissey.

One of the other traditions in our family (and in most families) is the taking of snapshots and slides. My father was an avid photographer, especially in his youth. He liked to acquire the latest equipment, take all kinds of photos, and develop them himself. His color slides from 1930s and 1940s are absolutely stunning, as fresh as if they were taken yesterday — that long-gone world before the war, before everything changed, as bright and luminous as it looked to the young eyes that saw it directly.

Unfortunately, our family lacks any tradition of keeping careful records of the dates, places, personnel, and occasions depicted in the many photographs it so enthusiastically accumulates. The photo at the top of this post was taken by my father sometime in the mid-1930s, but I have no idea who the young lady is — it was years before he met my mother — or what the occasion was that brought all those fine-looking cars out on a dusty road next to a barn.

All I know is that it was taken somewhere in New England, sometime around 1935. An automotive enthusiast could probably date it more closely by identifying the models of the cars, but I can’t.

The image is intriguing. It’s like a half-told story. Why are these people visiting the countryside? Who is this young woman? What is she looking at in the bushes?

Her hair is slightly blurred, meaning she moved her head as the photo was snapped. Was she turning away in annoyance when she saw her picture was being taken, as women often do?

I may never learn the answers to these and other questions, at least not until I pack up all the photos and take a trip to Yankeedom to visit my cousins, some of whom are quite a bit older than I. They may be able to shed some light on what I’ve been looking at.

The reason I got into all of these old snapshots is that I decided to start putting some order into the unholy mess that clutters the area all around my computer desk up here in the Eyrie at Schloss Bodissey.

Part of that task was to go through several boxes of old photos. I decided to do better by the Future Baron than my father did by me, and organize and label as many of them as I could. The first two boxes were relatively easy, covering the time between the early 1950s and the early 2000s (after which we converted to digital). I could identify friends and relatives in the pictures, deduce the dates (not always exact, though), and put them in chronological order.

Then I came to a box that had been retrieved from my mother’s house after she died. I had never seen these before — she must have had them stashed away in a filing cabinet since my father’s death. They range from the early 1920s to the late 1940s, with a few from much earlier — there’s one of my grandfather when he was a baby, in 1880. At least that one is identified on the back!

The vast majority of them are unmarked and mysterious. I can identify a few people in them — an aunt here, a cousin there, and occasional shots of my dad when he was young. The few that are marked — mostly by other people who sent them to my father — have inscriptions like these:

OK, it’s good to know the year, but whose home? And so it was in Westfield, but who is that grand dame? And who the heck is Jeanne?

These are questions that may never be answered.

The photos, however, are fascinating to look at. My dad was a good photographer, and he didn’t ask people to pose very often — he just snapped pictures, and left us a chronicle of a faraway time and country of which we know nothing.

As regular readers know, I present myself here as a proud Southern partisan. The shameful truth, however, is that I am the product of miscegenation between a Yankee gentleman and a Virginia lady.

My father joined the Army and came south during the war (not the Recent Unpleasantness, but World War Two). He trained at a base in rural Virginia, and met my mother at a dance in a nearby town organized by society ladies to welcome the soldiers into the local community. They married just before the end of the war.

I grew up in the suburbs around Washington D.C., living in both Maryland and Virginia, so I saw more of my Virginia kin than I did my father’s family. New England was a place I went to visit, but the South was where I lived. I identified with my maternal grandparents and internalized the attitudes of a Southern boy.

It wasn’t until many years later, after both my parents had died, that I learned of the tensions between my father’s family, particularly his mother, and his Southern in-laws.

Both my parents were from “good families”. My mother’s background and education were impeccable by any objective standard, but to a New England Brahmin, a Southerner is… well, never quite acceptable. You see, we Southerners were slaveholders — some of my mother’s ancestors certainly were — and we lost that other War, the important one, which puts us in permanent a one-down position. Plus we talk in a drawl, say y’all, eat vegetables cooked with side meat, and engage in many other improper behaviors. It must have been difficult for my grandmother to maintain her poise and civility in the face of all that uncouth raffishness.

My grown-up Virginia relatives could sense that attitude — it would have been hard to miss it. But I was utterly oblivious. My Northern grandmother doted on me, obviously not holding my half-breed status against me. Since I showed a talent for drawing and painting, she wanted me to attend the Rhode Island School of Design, as one of my cousins had done. But my mother allowed me to choose, and I decided to go to William and Mary, her alma mater, instead. My grandmother might well have bridled at that choice, but I’ll never know, since she died several years before I left for college.

I wonder if all of that family tension, so carefully hidden from me at the time, is why those old New England photos ended up forgotten in the back of a drawer after my father died. Were they a reminder of something that my mother preferred not to think about? All those elegant Yankee men and women gathering in the mountains of Massachusetts or the on the beaches of New Jersey — were they an unpleasant reminder of something from which she had been excluded?

I’ll never know the answer to that question, either. The photos are sitting here next to me as I write. They’re all that remain.

The reason why I started trying to put order into this place was the sudden onset of wet macular degeneration in left eye back in February.

I was very frightened for a few weeks, until I got a firm diagnosis and started the treatments. I thought I might go blind. Or even die — I had no idea what my condition was. So I decided to put my affairs in order. Which was a big task, considering the condition of this upstairs room. Boxes, footlockers, old furniture, books, papers, all kinds of junk — everything had to be sorted through.

I’d only done a little bit of the job before I found out my condition was treatable, and that I wasn’t going to go blind anytime soon after all. However, once I start cleaning and organizing, it’s hard to stop, so I just kept on going, doing a little bit every day. And then one day I unearthed those photos… The rest you know.

The effectiveness of the eye treatments has given me a new attitude. The improvement in my vision makes routine tasks an active pleasure. I actually like cleaning the sink, or folding clothes. What luxury, to be able to see clearly again!

So life is good. Fundraising week doesn’t really seem like a chore, considering. What’s more, my individual medical insurance policy was taken out before March 2010, and my coverage hasn’t been altered, so I was one of the lucky few to be grandfathered in under ObamaCare. Yes, it’s true that I’m not covered for prenatal care or sex-change surgery or prosthetic buttock enhancement — but you can’t have everything, can you?

My policy is the kind they call “catastrophic”, meaning that it has a really high deductible and doesn’t cover everything. It reduces the cost of my eye treatments, but they’re still expensive. Not as expensive as a new ObamaCare policy would be, mind you. But not cheap.

Which is one of the reasons why I’m hitting you up so intensely this fundraiser. If I’m going to continue to keep an eye on the Great Jihad, that eye has to keep working. Every time the tip cup clinks, the nickels and dimes go into the Baron’s Ocular Maintenance Fund.

And there’s one other reason why we’re pushing hard this quarter. It also has to do with this Eyrie — specifically, the roof over my head. That was a twenty-year roof when it was put on, and next year will be the twentieth year. So we want to deal with it before we have to start putting pots and pans all over the floor up here to catch the drips.

Let’s just pray that Obama doesn’t nationalize roof repair between now and then.

I’m really counting my blessings these days, and next to the improvement in my eyesight — which is a blessing beyond measure — our greatest blessing is the kindness of our readers.

Yesterday’s donors checked in from:

Many thanks to all of you for chipping in.