No, I didn’t remember that one all by myself. One of our readers sent the following email:

This [donation] is for the 3 monthly drive. It is in honor of Kristallnacht, which opened my parents’ eyes to the real danger in Germany.

You are doing the same but many will not listen.

Warmest regards and sending prayers for health and safety…

By coincidence, Fjordman had emailed a link (to an article on the likelihood of our crumbling President to use an endless series of Executive Orders to rule by Diktat for the rest of his reign). On the sidebar of the page Fj sent was a mention of the memorial essay below. The title says it all , and speaks volumes about the relentless fascist ‘progressive’ push against gun owners – one which continues today in America, driven by the spiritual descendants of those German confiscators in the fourth decade of the 20th century.

The emphases below are mine.

What made the Nazi Holocaust possible? Gun control

[…] The Night of the Broken Glass, the Nazi pogrom against Germany’s Jews [occurred] on Nov. 9-10, 1938. Historians have documented most everything about it except what made it so easy to attack the defenseless Jews without fear of resistance. Their guns were registered and thus easily confiscated.

To illustrate, turn the clock back further and focus on just one victim, a renowned German athlete. 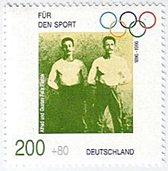 Alfred Flatow won first place in gymnastics at the 1896 Olympics. In 1932, he dutifully registered three handguns, as required by a decree of the liberal Weimar Republic. The decree also provided that in times of unrest, the guns could be confiscated. The government gullibly neglected to consider that only law-abiding citizens would register, while political extremists and criminals would not. However, it did warn that the gun-registration records must be carefully stored so they would not fall into the hands of extremists.

The ultimate extremist group, led by Adolf Hitler, seized power just a year later, in 1933. The Nazis immediately used the firearms-registration records to identify, disarm and attack “enemies of the state,” a euphemism for Social Democrats and other political opponents of all types. Police conducted search-and-seizure operations for guns and “subversive” literature in Jewish communities and working-class neighborhoods.

Jews were increasingly deprived of more and more rights of citizenship in the coming years. The Gestapo cautioned the police that it would endanger public safety to issue gun permits to Jews. Hitler faked a show of tolerance for the 1936 Olympics in Berlin, but Flatow refused to attend the reunion there of former champions. He was Jewish and would not endorse the farce.

By fall of 1938, the Nazis were ratcheting up measures to expropriate the assets of Jews. To ensure that they had no means of resistance, the Jews were ordered to surrender their firearms.

Flatow walked into a Berlin police station to comply with the command and was arrested on the spot, as were other Jews standing in line. The arrest report confirmed that his pistols were duly registered…

…which was obviously how the police knew he had them. While no law prohibited a Jew from owning guns, the report recited the Nazi mantra: “Jews in possession of weapons are a danger to the German people.” Despite his compliance, Flatow was turned over to the Gestapo.

This scenario took place all over Germany — firearms were confiscated from all Jews registered as gun owners. As this was occurring, a wholly irrelevant event provided just the excuse needed to launch a violent attack on the Jewish community: A Polish teenager who was Jewish shot a German diplomat in Paris. The stage was set to instigate Kristallnacht, a carefully orchestrated Nazi onslaught against the entire Jewish community in Germany that horrified the world and even the German public.

Kristallnacht has been called “the day the Holocaust began.” Flatow’s footsteps can be followed to see why. He would be required to wear the Star of David. In 1942, he was deported to the Theresienstadt concentration camp, where he starved to death.

One wonders what thoughts may have occurred to Flatow in his last days. Perhaps memories of the Olympics and of a better Germany flashed before his eyes. Did he have second thoughts about whether he should have registered his guns in 1932? …

***************************
Alfred Flatow was in his early 70s when he was starved to extinction by the Nazis. I doubt he was actually doing anything that resembled “thinking” by then. Who does when they’ve wasted away to nothing in the midst of endless physical and spiritual squalor?

I often think of our Canadian friend and his parents’ wise – if terrified – decision to escape Germany. No doubt they left much behind, enriching the Nazis. So many others refused to believe “it could happen here” – certainly not in a bastion of Western culture which had given us Bach and Beethoven and, ironically, cutting-edge Christian theology. A people who refuse adamantly to ever face their dark side – present-day Norway sadly comes to mind – is forced to scapegoat its own or to project onto singular others in order to silence them. Norway’s recognition of Hamas – Hamas! – is sad proof of its totalitarian fevers. Such cowardice is driven by fear and ends in the small cruelties innocent people endure there even now.

Seventy-five years on, not one European country has learned this lesson yet. Even in Germany, they remain terrified, refusing, for example to permit any DNA studies which may touch on race. In bending over backwards to avoid the mortal sin of racism, the purported anti-racists become contorted and obsessed with the possible occasions of racialism sins which they somehow see lurking everywhere. The lovers of collectivism suffer from the perversion of scrupulosity. Any spiritual director could tell them the cure for their misery, but like the other sufferers of this disorder they haven’t the characterological sturdiness required to simply let go, to surrender.

Nor are there any Churchills on our horizon now. Even if there were any great leaders extant, would they be repudiated in the end as Sir Winston was? Simply put, we are all-too-often driven by fear and laziness; we do not want reminders of our peril. A recent example was the non-response to the Center for Security Policy’s warnings about EMPs. People’s eyes glaze over –the state of Maine being a singular and heartening exception.

There are rare moments, say that brief period of the American Revolution’s hard years, where fear and laziness are occluded by bright and shining courage. However, we may not be able to generate and sustain enough of such moments to get by in the future. Millenial and pardigm-shifting Change is arriving a bit behind schedule, but it surely will be here as much as we would wish otherwise. I’ve heard more than one person say they are old and will be glad to miss the cataclsym, not thinking how that makes those left behind feel, the ones who will have to figure out how to get by.

Have we been gutted already, mostly content to avoid peering too hard into the murk? Do we hesitate or do we simply try to fit in, unnoticed, desiring only not-to-be-disturbed? Do we tell ourselves that this desire not to be worried is a love of Peace?

We – me writing this and you reading it – have had the good fortune to survive the murderous 20th century. Because we will not look at history, we think our existence-by-consumption is the norm. Even as we eat the seed corn and hang out the “Do Not Disturb” sign we insist that our times are usual.

Only the sentinels, our gun-owners, are willing to discuss a contrary future.

38 thoughts on “Kristallnacht and the Drive for Gun Control”