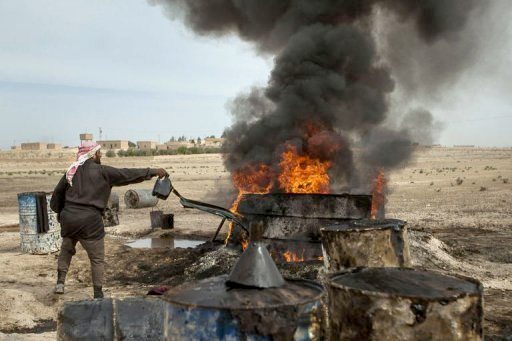 What’s really going on in Syria is not something you will read about in the legacy media. An article like the one below will never appear in The New York Times or The Sunday Times. An in-depth documentary report about the “oil battalions” of Syria will never be aired by CNN or the BBC.

The essay below was originally published in French at Riposte Laïque. Many thanks to Gaia for the translation:

The pillage of Syria organized with the help of Europe and jihadists
by Bernard Dick, October 22, 2013

We denounced the covert Western intervention in Syria to help the Islamist rebellion. Assistance given to the international jihad brigades and radicalized rebels under the form of intelligence, military training, arms supplies etc. is very important. The bill has been settled, in particular by the Gulf States. The West acted on behalf of Qatar first, and then Saudi Arabia, both major customers in the armaments industry.

There were American mercenary soldiers in Iraq and elsewhere (Xe and former Blackwater). A new opportunity presented itself to Western states in crisis, their intervention in Syria on behalf of another rich state that pays the bills. What do you call these states, apart from mercenary States? We measured the importance of this phenomenon recently in Libya in the bombing of Libyan territory by NATO forces on behalf of Qatar. And we still do not even know the true extent of this disastrous intervention. The disaster has now moved to Syria.

In Syria, the jihadi expansion, “the Syrian rush eastwards”, came to fruition. The territory of northeastern Syria became the seat of a profitable as well as criminal operation with the rebel takeover of oil-well activities.

[Photo caption: Theft of Syrian oil — primitive means for the theft and sale of oil]

Starting in 2013, we have seen the emergence of bandits in the regions of Deir Ezzor, Rakka and Hassaké, bandits engaged in a special activity: the theft of crude oil. First they drilled pipelines to extract crude then sold it to the public, taking advantage of the general scarcity and making significant profits. Then they stole extraction and oil exploration equipment and even pipelines, hundreds of kilometers of them, with a value exceeding millions of dollars. These items were sold as scrap for a few thousand Syrian pounds (€1 = 150 LS)!

But in this race for the black gold of East Syria, greed was quickly generated and disputes over wells have become increasingly fierce between the protagonists represented by hordes of al-Qaeda (the al-Nusra Islamic State of Iraq and Sham (EIIC) Front), the heads of Bedouin tribes and Kurdish fighters. When disputes broke out over the division of spoils, as if they were raiding camels or cattle, some wells were burned to prevent another faction occupying the well: “This well is either mine or belongs to no one.” It belongs to whomever can attract the greatest number of fighters to protect “their well.” Other wells were deliberately demolished.

This oil, in its two variants, heavy and fluid, which fell into the hands of people who have no concept, no knowledge of the risk of contact with bare hands and without protective masks, has led to skin diseases and respiratory diseases, not to mention inhalation of toxic gases caused by fire pits. Thieves, employing these primitive methods of “refining” absorb more carcinogenic gases and fumes of toxic radiation. Will the oil overcome the thieves’ lives before international intervention stops this traffic?

The rupturing of pipelines has triggered the flow of oil onto arable land and the poisoning of deep groundwater for hundreds of years. To this must be added the atmospheric emissions of toxic gases from burned wells. Equipment used for production and extraction is 95% contaminated.

Having dismantled and sold to Turkey a thousand factories in Aleppo, then robbing the wheat silos from this rich Syrian plain, jihadists in recent months have attacked oil to the absolute silence of the international community. The “oil battalions” were formed for self-refinement, utilizing hurried techniques with mobile refining units. The stolen oil is the property of the Syrian people. It is plunder.

The only way to make enough profit was to embark on oil exports in quantity via tankers to Turkey, and particularly to the nearest refinery at Tüpras Batman (under investigation in Turkey for tax evasion). The oil is then transported to Europe. The oil is sold to Turkish mafia intermediaries at half of its world price, or $50 a barrel. Oil experts believe that the shortfall for Syria, the victim of an oil blockade early in the war (March 2011) was $7 billion in February 2013.

Under the pretext of “helping the Syrian civilian population, particularly in response to the humanitarian problems [ … ] and to restore normal economic activity” European Foreign Ministers of the EU decided on 22 April 2013 to allow the import of crude produced in Syria and export of equipment to the oil and gas and investment sectors in these areas.

So Europe, which has allowed the import of oil stolen from the Syrian people, behaves like a fence and swaps the cheap oil against money and equipment. In addition, revenues from the oil collected by the jihadists and al- Nusra EIIC are used to purchase weapons, armour, provide a comfortable pay-out for jihadists and maintain an endless war. The EIIC can afford to attract new jihadists and compensate them generously. The activity of the EIIC even extends also to the cultivation of cannabis, as was the case in Afghanistan.

The Syrian people will not receive a penny of revenue from its oil, which will feed into the new Emirate princes — jihadis of oil. This money is channeled to support the world jihad. Europe saws off the branch on which it sits.

Europe’s responsibility is huge. History will record this morbid alliance against nature between Europe and the world mujahideen, which it cracks down on its own soil while financing them elsewhere.

3 thoughts on “The Oil Battalions of Syria”