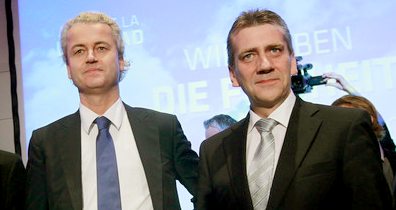 Long-time Gates of Vienna readers are familiar with René Stadtkewitz, who founded the Islam-critical party Die Freiheit in Germany, and formed an alliance with Geert Wilders as part of the pan-European struggle against Islamization.

Die Freiheit has recently been eclipsed by the rise of the EU-skeptical party Alternative for Germany (Alternative für Deutschland, AfD). The following remarks by Mr. Stadtkewitz were translated by JLH, who includes this prefatory note:

We first encountered René Stadtkewitz when he defied his party superiors to hold a public meeting to discuss Islam, and had already seen his house burned out because of his resistance to the building of a mosque in his area.

His comments supply some of what has been done to him and his party since then, and thoughtful commentary on the situation, but the crucial fact — noted elsewhere — is that he is throwing his support to AfD (Alternative for Germany) because Die Freiheit has not been able to pass the percentage hurdle to enter the Bundestag. It is the swan song of a movement, but I expect to see Stadtkewitz continue his participation in the struggle.

If I follow the press these days, I ask myself again, what has become of this beautiful land. Exactly three years ago today, at my instigation, there was a great event with Geert Wilders in a Berlin hotel . It was the first time that he spoke in Germany. Because of this event, I was ejected from the CDU faction in the Berlin house of representatives, even though Geert Wilders was at that time in exploratory talks with the CDU’s sister party in the Netherlands.

This event was also the start-up for a new party which called for more freedom and democracy, more participation and less paternalism. It wanted to break taboos — disliking the fact that some things in this country could be spoken of not at all, or only euphemistically. For example, the reasons why certain immigrant groups are less ready to integrate, and the causes of the criminalizing effects of parallel societies.

Intelligent people from all levels of society came to play a part. Some had had experiences with other parties — they came from the CDU, the FDP, the SPD and the Greens, too. Even former members of the present Left Party joined. But most were people who had never before belonged to a party. They ranged from 16 to 102 in age and were full of energy. Many had had their own experiences with immigration and were quite clear on why they came to us. Extremists had no chance — the rules were crystal clear and always applied. None of this interested the media, nor the painstakingly developed party program. It sufficed to say anything negative about Islam anywhere. Anyone who criticizes Islam as the cause of most integration problems, or even most conflicts in the world today, is ridiculed, insulted and smeared. But not listened to. Suddenly, all these intelligent people are Islamophobic and right-wing populists.

But what does Islamophobic mean? — Fear of Islam.

No, all of this shocks and concerns us, but we are not afraid. We still feel secure in this country. Our security forces have thus far foiled every planned attack. And we are not afraid because we know that most Muslims in our land are not following those clear instructions.

But we do claim the right to question and criticize the sources and the political demands of Islam. We claim the right to address the fact that immigrants from Islamic countries have by far the most difficulty adapting to our country, and at the same time more than a few of them wish to transform our country according to the intolerant precepts of sharia and the Koran. We reserve the right to criticize the fact that numerous extended Islamic families — to some extent illegally — are being supported in this country and the police and justice system are paralyzed. We examine things more closely and we demand political consequences.

But what can make us afraid is the united front in the media, who, like vultures, x-ray every word spoken by a critic, insinuating, inventing connections that never existed. It is almost as if the idea is to isolate and bring down an unwelcome something or someone that has already been taken down before.

Reports, essays, opinion pieces, commentaries ,are all from the same mould. Even the author is not obvious, no matter in which paper the article appears.

And those few who try to think for themselves in their writing are in the eyes of the united media front the newspapers who must be “right populist” or even play a part as “liaison with rightist extremism.” Almost as if they are giving neo-Nazi terrorists tips on where to go next.

And the fact that it was always leftist journalists hand-in-glove with left extremists putting hotel owners and landlords under pressure because ordinary, decent members of our party had meetings somewhere in the country — that is not important. Not even when establishments are damaged, people attacked and publicly smeared. Oh no — they call that civil courage.

It is not without reason that Germany is criticized from he outside for a lack of press freedom.

Where were the genuine journalists when “Defense Minister” Sharping used lies and falsified pictures to explain why it was right and necessary to go to war with the Serbs? All of a sudden, no one can imagine anything. No finger is waved in moral protest. It is not enough to catch politicians in some misdemeanor when at same time a collective brew is being mixed up on really important matters. They do not appreciate their complicity in so many bad developments.

Anyone who vilifies a critic of Islam as a dull Islam-hater either has no idea of the truth about the “religion of peace”™ or is willfully ignorant.

By all valid estimates, the saving of the euro will cost €1,000 billion. But culture and values are lost to a people forever. What is left is a people with no future.

Anyone who can be driven by know-nothing or ideologically driven media, who knuckles under to a dictatorship of opinion or feelings, has already lost. Anyone who is directed by what these papers find good or bad becomes the plaything of taboo-setting political correctness which will sooner or later destroy this country.

No one who worked for the goals set by our party is a bad person. To the contrary, the scolding by most of the media is not only unjustified, it is stupid as well. Volunteering your free time to become involved is living democracy. And that also includes criticizing conditions and suggesting solutions. No matter what the subject may be. There are good reasons for a halt in immigration from Islamic countries. They can be argued. But denying critics of an objectionable ideology, branding them “right populist” is unworthy of a free country and shows how right and necessary it is in any organization whatever to keep on defending freedom and democracy in our land.

3 thoughts on “The Legacy of Die Freiheit”