Update: This essay is now available in German at Europe News.

Below is ODIHR’s logo:

I don’t know about you, but I find this design a little bit creepy. A tree full of Orwellian eyes, watching everyone to make sure that no one’s human rights are violated! The ODIHR tree never sleeps…

And the three-colored foliage clues you in to the “diversity” of the operation. The subliminal message is that OSCE and ODIHR will be ever-vigilant in their enforcement of tolerance and inclusion for religious and racial minorities, women, the disabled, LGBT people, and so on.

In fact, the final item in the above list was prominently featured in last week’s conference in Warsaw. No matter the topic — tolerance, discrimination, the rights of women, religious freedom, etc. — LGBT NGOs sent representatives to the podium to speak up about the rights of people who hold non-traditional sexual orientations.

I’m not going to argue the merits of such interventions. But what I can’t help but notice is the massive funding behind the sexual-rights push at the OSCE. This implies the participation of George Soros’ Open Society Institute and other organizations in what might be called the “Soros Galaxy”. These trans-national leftist groups promote the deconstruction of Western culture through various means, acting in partnership with like-minded progressive organizations and well-meaning liberal Christian groups.

The following flyer was distributed on the fourth day of the event: 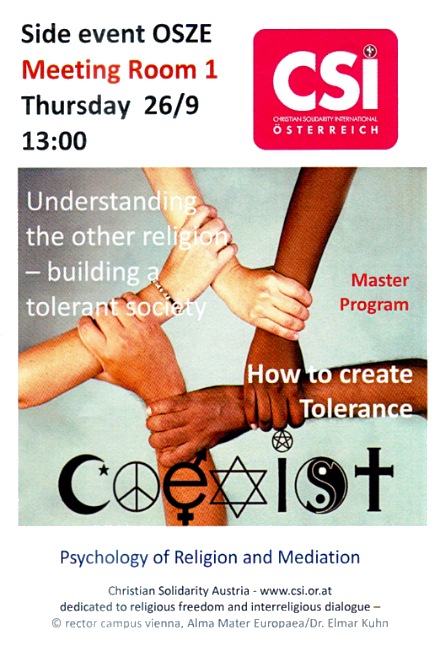 The “COEXIST” meme is fascinating, in a repugnant way. The seven letters seem to be religious, yet the second one is a peace sign, or broken cross — what religion is that? And the gender-related symbology of the “E” represents which particular faith? I’m not sure if the main bar of the “I” represents anything in particular, but the pentagram dotting it must refer to Wicca or something similar. The yin-yang “S” would include Taoism, but Hinduism, Buddhism, Sikhism are completely absent.

A strangely non-inclusive “coexistence” is at work here.

Mind you, it was a Christian organization, Christian Solidarity Austria, pushing this side event — promoting this demolition of Christian civilization in the name of “interreligious dialogue”.

Ironically, of course, once the deconstruction is successful, Islam intends to build the World Caliphate on the rubble of Christendom. You and I know it, the Muslims know it, but these progressive Christians seem unaware. Or perhaps they do see what lies ahead, and simply don’t mind…?

Such is the iconography of the New World Order.

Tuesday night’s side event was also hosted by the luminaries pushing the NWO. As I mentioned in my post, a presenter from the Runnymede Trust was among the authors of the anti-Islamophobia guidebook for educators. It’s no surprise that Runnymede is another star in the Soros galaxy.

And so it goes. Advocates for the New World Order — in partnership with socialist governments and progressive NGOs — have joined Muslim Brotherhood front groups to co-opt the OSCE and other international bodies in a push to obliterate the existing order of sovereign nation-states.

Each bloc — the Ummah and the Left — thinks it can rule over the ruins when the project is complete. Anyone want to place bets on the likely winner?

35 thoughts on “The Iconography of the New World Order”