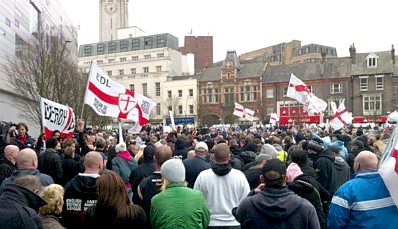 Joe is an EDL supporter and a longtime commenter at Gates of Vienna whose cogent comments are always welcome in this space. The comment below echoes and complements what Dymphna said in the previous post. It was posted earlier this evening, but it is so far down the thread that it might otherwise go unnoticed.

I’m reposting it here in its entirety. It has been edited for punctuation and paragraphing:

I think I have a closer ring-side seat in all of this than anyone else commenting on it, on any of the major blogs.

Tommy has been under unbelievable pressure, not just from the state, the media and the police, but has also been involved in making two or three videos in the last nine months. One of these videos has taken at least seven of the last nine months to complete. Only a few weeks ago he did the last day of shooting that documentary, and I remember him talking about that same documentary back in June, and today when I looked I realised he’d been talking about that same documentary in February. I’ve seen three minutes from one of these documentaries, and I watched it twenty times, and each time the hair stood up on my neck (the whole thing can’t live up to those three minutes, so adjust your expectations).

I also know that there have been Nazis lurking round EDL divisions and demos. I heard from some gay people that they got death threats from Nazis when they turned up on demos, and I was in the room when Tommy was told this. He was angry, frustrated and depressed that the Nazis were still cropping up and threatening people whom Tommy was encouraging to show themselves (mind you, given half a chance, those homophobic Nazis turn up in the comments section of GoV and other sites).

But the gays in EDL are not shrinking violets, and they deal with violent Nazis by themselves, knowing they can turn to their compatriots for support. Still, it must be awful to be Tommy and have his family get hundreds of death threats from Muslims with no police action, to have all the organs of the state on his back, to have the media systematically lie about him and EDL, and then to have Nazis turning up and trying to destroy everything he’s doing.

I can’t say that I would have left EDL the way he did, but then I’m not 1% of the man he is, and would never have been in the situation where I would have to make the decisions he has had to make. Those of us who know him acknowledge he has an unbelievable tolerance for stress. Even those who don’t know him must recognise that he’s taken on a national struggle that none of the institutions of the entire country would take on.

When this crisis broke a few days ago, I didn’t think EDL would survive (I only observe things from the periphery). But seeing how EDL have responded, I think they will survive. And I think the actions they are taking might be entirely productive. I’m pleased to see how professional they’ve been in their response (and that must really rile the traitorous media and “an-ti-fa”). And EDL’s tactical decisions give me confidence.

I know that the Nazis can’t be more than 5% of EDL, and I know they are there because the state agencies place agents provocateurs even in organisations like the Green movement, so they are bound to be inside EDL And if EDL was any left-wing or Muslim organisation, the media would not have concealed the organisation’s attempts to communicate its message: Nazis and racists are not welcome. Instead, the media send the opposite message to Nazis.

I think we should all give Tommy the benefit of the doubt. I have no problem supporting EDL in what they are doing and supporting Tommy in what he is doing. Maybe with Tommy’s magnetism out of the way, EDL can sort out the problem with Nazis that just proved too much for him (on top of everything else he has taken on). As likable as Tommy is, maybe EDL should never have had “a face”, but should have maintained a clandestine nature. As things stand at the moment, EDL has split off into “a face” that will work with the establishment, and an anonymous-collective street movement that will continue to hold protests wherever it wants.

The people who make up the backbone of EDL are almost entirely good people, and I’m proud to know them. They have jobs and families, and they are having to step into the breach, because a country that is £1 trillion in debt will fund any rag-tag bunch of jihadi economically-draining traitors, but will not protect its future, even when 40% of the population are saying that civil war is inevitable.

It gives me great pleasure to see the loons from the BNP or their International Socialist brethren claim that EDL is funded by Zionists, Mossad, Martians, whatever. I know the EDL gets by on determination, donations and perspiration. In May I saw a retired man with a pacemaker lugging massive sound equipment across the centre of London, because the police decided to go back on their word and prohibit EDL driving the equipment to its destination. That man, and a few of his friends, made one of EDL’s most important demos ever happen. And no more than thirty people know who he is.

And at the end of that demo, I got talking to a young bearded hippie (who I thought might be UAF). As we walked away from the demo, it turned out he was a student and a neo-Nazi. I told him: “Go on, say that louder, I want some of these thugs around you to hear, because they will kick the s*** out of you”. He was shocked, and wanted to know why. So I gave this loon a rundown of why EDL hates Nazis and supports Israel. The idea that it is the skinhead, working-class thugs of EDL who are the Nazis, yet there I was talking to a media-misled, bearded, hippie, middle-class, Hitler-loving, Israel-hating Nazi.

I have no doubt that Tommy would not have walked away from people like the man with the pacemaker unless he thought he had no other option than to do it this way. Now EDL have the opportunity to show to Tommy and to the nation that he was not essential. Succeeding with that is going to be the best result. Tommy has proved to be too significant. The reality might be that he was just filling that role because he could (if he was not there, EDL may have just never had a public face). Maybe without him there to fill that role, refusing to have someone in that role will be the best way to thwart the deceptions of those who made the EDL necessary.

Sorry that this is buried all the way down here. It’s taken me some time to get my mind round what has gone on.

51 thoughts on “The EDL Will Survive”