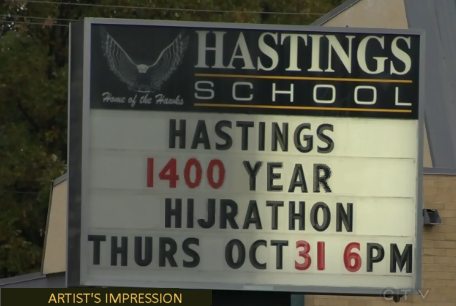 As reported in last night’s news feed, parents of children at Hastings School in Winnipeg were upset when the school cancelled Halloween and replaced an annual Christmas concert with an evening of African drumming.

Cynthia Yacowar-Sweeney has more information about the situation at Hastings, and adds some of her own commentary. The essay below was originally published at Vlad Tepes:

Winnipeg’s Hastings School, presently at the centre of a controversy regarding the cancellation of this year’s Christmas and Halloween celebrations, is part of the very same school division where a dozen Muslim families who recently arrived in Canada, went to demand their children be excused for Islamic reasons, from the elementary school music and co-ed physical education programs, both compulsory, back in 2011.

In the end, the immigrant Muslim families finally accepted the physical education classes, but with stipulations: boys and girls would have separate classes. However, the Muslim parents would not allow their children to be exposed to singing or playing musical instruments, as this is not permitted in Islam. The school division caved to Muslim demands by suggesting these students write a music project instead.

Hastings School has decided to go with African “drumming”. Why not African “music”, if anything, like beautiful Mali music that was outlawed by Islam when al Qaeda took control of northern Mali?

What’s interesting is that the “daf” drum from Islamic North Africa is the “only” instrument AND the only “kind” of drum allowed in Islam. Is this the drumming that Hastings school is offering in lieu of our traditional celebrations that have been celebrated for a few hundred years?

According to the Koran and Hadiths, musical instruments, including drums (such as the tabla drums that are not hollow as the daf drums) are all regarded as tools of Satan that lead man astray and away from Islam and the path of Allah (shirk). Musical instruments, as well as singing (especially for women) which is considered the voice of Satan, are against Sharia or Islamic law. They are all forbidden.

Sometimes the daf drum is forbidden in Islam because this drum might stir up human emotion, which is simply not allowed in Islam. The daf drum resembles the tambourine without the metal jungles, so the sound is not all that inspiring, and is therefore often sanctioned in Islam.

With more and more concessions and accommodations to Islam, Canada is beginning to resemble the UK, as Sun Media Ezra Levant writes: “In 2007, some schools (in the UK) stopped teaching the Holocaust because it contradicted the anti-Semitic views held by ‘adamant’ families there. The history of the Crusades was dropped too, because the ‘balanced’ approach taken by schools contradicted what the local mosques were teaching. And in 2008, schools in Bristol yanked gay-friendly books out of libraries when Muslim parents complained.”

There is still time for Hastings School to turn its back on Shariah and bring back the traditional holiday festivities to its students. Let’s see how things progress.

For further reportage on Hasting School, including video interviews with parents, see this article from CTV News Winnipeg.

Note: The image at the top of this post has been digitally altered. The actual sign reads: “Hastings 14 Annual Walkathon Thurs Oct 3 6PM”.