According to The New York Times, the Fed is unleashing a new round of Quantitative Easing, despite its earlier hints that it would tighten up the money supply:

WASHINGTON — The Federal Reserve, still uncertain that the American economy can grow unaided, announced on Wednesday it would press ahead with its stimulus campaign of asset purchases and low interest rates.

It reminds me of the fabled land of Katroo, as chronicled by Dr. Seuss in his 1959 book Happy Birthday to You!.

In Katroo, on your Day of All Days, you are invited to party like there’s no tomorrow. “If you wish, you may eat with both hands and both feet. / So get in there and munch.” The party then continues into the Night-of-All-Nights-of-All-Nights in Katroo: 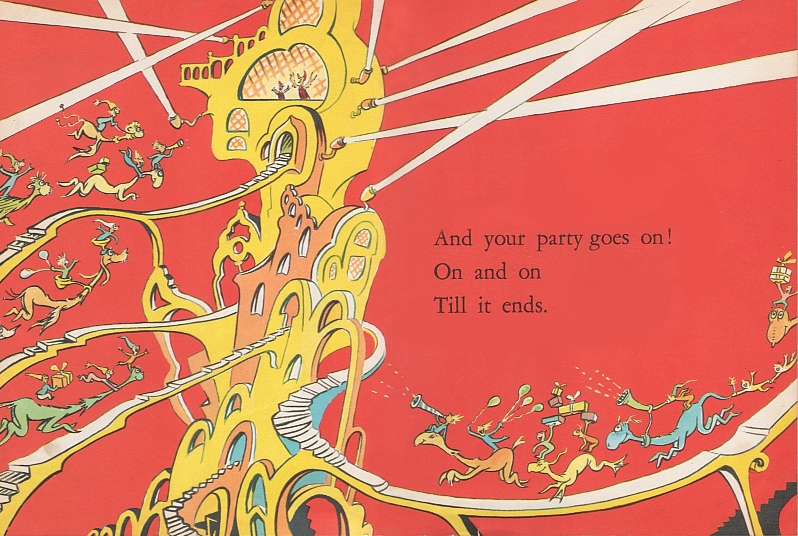 So America has become the new Katroo. Let’s enjoy the party while we can.

The NYT had more to say:

The Fed maintained a relatively optimistic economic outlook in the statement, released after a scheduled two-day meeting of its policy-making committee. It said the economy continued to expand “at a moderate pace” and that the availability of jobs continued to improve.

But the Fed reiterated its blunt assessment that “fiscal policy is restraining economic growth,” referring to enacted cuts in federal spending and the unresolved, episodic standoff over the federal budget.

It also said that the housing market, which grew strongly during the first half of the year, had cooled, because in part of higher interest rates.

“Taking into account the extent of federal fiscal retrenchment over the past year, the committee sees the improvement in economic activity and labor market conditions since it began its asset purchase program as consistent with growing underlying strength in the broader economy,” the Federal Open Market Committee said in its statement. “However, the committee decided to await more evidence that progress will be sustained before adjusting the pace of its purchases.”

The Fed noted that inflation remained below the 2 percent annual pace it considered most healthy, and it said persistently low inflation “could pose risks to economic performance,” but it reiterated its expectation that inflation would rise modestly over the next few years.

It’s important to remember that when the Fed talks about “inflation” here, it means price inflation. The money supply is already hideously overinflated. At some point prices will inflate to reflect the engorged supply of dollars, but for the moment we can still dance the night away here in Katroo.

More from the Old Grey Hag:

Fed officials had spent much of the summer preparing investors for a retreat from the bank’s stimulus campaign before the end of the year. That remains a possibility: The Fed’s policy-making committee is scheduled to meet for the final time this year in mid-December.

But analysts increasingly expect that the Fed will continue with the present pace of asset purchases well into next year.

There is still little sign that the Fed has succeeded in stimulating job growth. The share of adults with jobs remains at roughly its postrecession nadir. The unemployment rate has fallen, but largely because fewer people are looking for jobs.

So it’s official: QE doesn’t solve anything. It just keeps the banks in business as usual.

The Fed and the Treasury have no idea of what to do except to keep printing money — the 21st-century version of money-printing being the repeated purchase of Treasury instruments by the Fed to keep interest rates low.

Doubts are creeping in around the edges now, however:

Also, inflation has dipped well below the 2 percent annual pace the Fed has established as its goal. Prices rose in August at an annual pace of 1.2 percent, excluding food and fuel, according to the Fed’s preferred measure, the Commerce Department’s index of personal consumption expenditures.

This has prompted some Fed officials, and outside critics, to question whether the asset purchases are worthwhile. Ms. George, in her dissenting statements, has repeatedly cautioned that the purchases may disrupt financial markets.

While some people want to party even harder:

Other critics draw the lesson that the Fed is being too cautious. Some argue that the Fed should increase the volume of its asset purchases; some want the Fed to consider other, more radical, measures, like a temporary increase in inflation.

The key word in there is “temporary”. Who can guarantee just how temporary price inflation will be, once it starts? And what will happen after a year, or two years, of steady price inflation? Or even hyperinflation?

We’ll find out soon enough. In the meantime, cut yourself another piece of cake, and eat it with both hands and both feet.

14 thoughts on “Party Hearty in Katroo”