Our Israel correspondent MC takes look at “deniers” — not just Holocaust deniers, but all the deniers of historical events — and what they portend for the times that lie ahead.

Of Canaries and Coal Mines
by MC

A few years ago I was doing some work for a large British bank in Cardiff (Wales). I was staying in a caravan site in Risca on what was once one of the oldest anthracite coalmines in the country. As I am wont to do, I started looking at the history of this coal mine.

It was a shocking history. Although the coal was of very high grade, there was a lot of gas present, and not only was this gas extremely poisonous, but there were also some very bad explosions as well. This was where the use of canaries to detect gas became the norm: all the time the canary was alive, the air was safe and work could carry on. If the canary stopped chattering and started dying, it was time to get out.

The other day I came across this quote:

“Jews, it is often said, are the canary in the coal mine of civilization. When they become the objects of savagery and hate, it means the air has been poisoned and an explosion is soon to come.”

“Before the war the graffiti in Europe was ‘Jews to Palestine’; nowadays it is ‘Jews out of Palestine’.”

So where do we go?

It is a sad state of affairs that we have in the modern world, notwithstanding the post-war civilisation and tolerance, born of the pain and suffering of the ’30s and ’40s (we should not forget that for the Chinese, the war started in 1931 with the Japanese invasion of Manchuria).

The massacre at Nanking in 1937 is the subject of a denial movement. Some authorities in Japan claim that the massacre of civilians (250,000 +) never took place, and that it was a purely military operation turned into a propaganda stunt by the rest of the world (including members of the Nazi party present at the time). The Wikipedia entry has some very nasty graphic photographs for any who doubt its veracity.

Notwithstanding the overwhelming evidence, there are those who deny it happened. 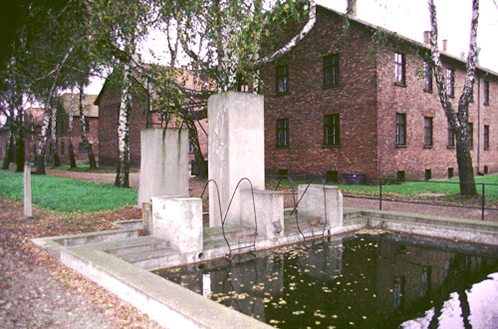 The same is true of the Shoah. Holocaust-deniers point to the ‘swimming pool’ at Auschwitz as proof of the camp’s benign purpose. There is a fascinating book written by a British Soldier in one of the British POW camps in the Auschwitz complex. It describes the various compounds within the camp and their inmates (Spectator in Hell by Arthur Dodd).

When Dodd and the POWs disembarked they noticed dozens of bundles of clothing that had just been left by the rail tracks.[2] As they were marched to the concentration camp and factory where they would be working, Dodd tells of a teenage Jewish girl, stripped to the waist, who he says was being savagely whipped by an SS officer. Dodd and the other POWs attempted to get between him and the bleeding girl. The SS officer pulled out his pistol and threatened to shoot Dodd, who was at the front, if he interfered further. A Wehrmacht soldier warned Dodd that he meant what he said. The British troops stepped aside and the officer resumed his task of beating the girl.

The filth of Camp E715, with its accompanying smell of burning flesh from the crematorium at nearby Auschwitz II (Birkenau), was to be Dodd’s home for the next 14 months. During his imprisonment in Camp E715, Dodd witnessed the mistreatment and killing of Jewish inmates at the camp by their SS guards, including Jews hanging from the gallows in Auschwitz I and several pushed off high scaffolding.

And, yes, there was a swimming pool at Auschwitz I Stammlager, but the big question is who was allowed to use it?

Certainly not the Jewish inmates.

Auschwitz was primarily a huge labour camp it had 35 sub-camps and it housed many thousands of people who could be put to work for the Reich; POWs, politicals, Christians sects, Polish Catholic priests, homosexuals and criminals. All were kept in different sections of the camp. Auschwitz I Stammlager was built for Polish ‘Politicals’; the Jews were kept in Auschwitz II Birkenau alongside the crematoria.

The modern Holocaust-deniers would have us believe that all the thousands of eyewitness testimonies are false and that prisoners were not mistreated in any way except later on when food shortages caused starvation to all and sundry.

The Jewish Virtual library has a section on Holocaust denial which contains astute rebuttals of all the denialist claims.

So what is my point? Elements in Japan deny the Nanking massacres because of the shame it brings to national pride, but Unit 731 (described as the Asian Auschwitz) is not so well-known, so it tends not to attract major attention, but is equally indicative of the sick society that these deniers wish to reintroduce. Auschwitz itself attracts a lot of attention and much controversy because of errors in perception. It was not a single purpose ‘Death Camp’ as were Treblinka, Sobibor, Chelmno etc. it was a general purpose labour camp with a very extensive capacity for genocide.

The horror of human depravity in the 1940s lead to a profound awareness of the frailty of human ‘civilisation’, and that there are some races, particularly the Jews, who have inexplicably provoked genocidal hatred from time immemorial. It was in recognition of this that laws against anti-Semitism were drafted in many countries, and also why the United Nations deemed the creation of a Jewish homeland to be a vital policy.

But once again, after 65 years, the canaries are dying. The poisonous and explosive vapour of Jew-hatred is once again common. It is fostered by neo-Nazi and Islamic elements, and is now tolerated by left-leaning political establishments worldwide.

Yet the canaries are just the primary indicator of a wider hazard. The conflagration that follows the death of the canary is not selective: it kills, burns and maims all who are in its path. Hate is corrosive to the fragile fabric of a civilised society. The toleration of hatred is a death sentence for many, but the positive encouragement of hatred, as has become apparent in Europe, must signify the end of civilization as we know it.

56 thoughts on “Of Canaries and Coal Mines”