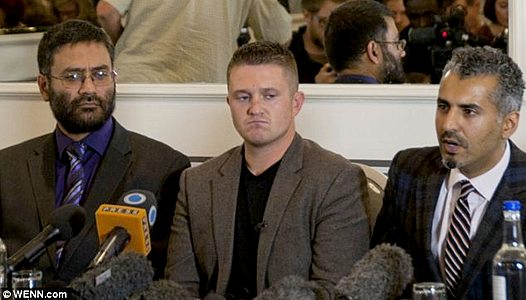 Early this morning I learned from a source close to Tommy Robinson that there is indeed more to his new situation than meets the eye.

Tommy said it broke his heart to leave the EDL. He wanted his longtime supporters to know that he is aware they are demoralized and angry. He apologized for leaving them in the lurch. It was not something he wanted to do, but something he knew he had to do.

Kevin agreed with Tommy’s views concerning the EDL, and realized that they had come to a crossroads together. He felt that they should make a joint decision about which way to turn.

The two men entered into their new association with the Quilliam Foundation of their own free will, with their eyes open. Tommy said:

“Give me six months. If you’re not satisfied with what you see, you can crucify me then.”

In the meantime, Quilliam is giving Tommy and Kevin intensive training in Islam, so that they will truly understand Islamic principles and teachings.

Tommy was at pains to emphasize that they are not being paid; their relationship with the Quilliam Foundation is a partnership.

The rest of this post is pure speculation on my part. All I know for certain is what I reported above.

I still believe that pressure was brought to bear on Tommy Robinson and Kevin Carroll. Why else would they make such a drastic move so suddenly, without any advance warning to their closest supporters? We’ve seen over and over again that the government and the media are willing to pull out all the stops in their attempt to demonize and intimidate Tommy and Kev. The pressure on the two must have become simply unbearable.

The decision to partner with Quilliam is not without its advantages. A cloud of dhimmitude seems to have descended upon the two Lutonian stalwarts, but it has a silver lining.

Look at it this way: the move to Quilliam has made Tommy and Kevin respectable. Tommy has an even higher media profile than before, and is booked up for interviews as far out as the eye can see. When he chooses to speak his mind, the microphone will be in front of his face and the cameras rolling.

The demonization will obviously continue — the BBC will not give up their whipping boy so easily — but the media will be obliged to mute the worst of it. After all, how can they malign someone who has the imprimatur of the Quilliam Foundation, an organization that enjoys their utmost approval? Especially now that Tommy is being trained in Islamic teachings, so that he will fully understand what he formerly abused…

I say: Give him the six months he asked for. Wait until he has fully absorbed his Islamic training. Then we’ll see what he has to say.

98 thoughts on “Between a Rock and a Hard Place”