Our Israeli correspondent MC returns with some thoughts on the sorry state of politics and the media in modern Western democracies.

All is fair in Love and War and Politics
by MC

All is fair in Love and War, and, it would appear, Politics.

It is a huge temptation for politicians, especially senior politicians, to lie to their people. There was a time when a politician caught out in a lie would be expected to offer his resignation as soon as possible.

The modern acceptability of the political lie, reinforced by the huge brainwashing capability of the modern media, has already brought politics to an all-time low. The failure of the media to hold politicians accountable for their actions has already destroyed democracy as we know it.

It is the media who are the vanguard of political correctness, not its critics. This alone has given a green light to those in government who are hungry for ever more power.

Governments always strive for unaccountability; it is a raw fact of life. The moment we elect and empower a politician, he struggles to throw off the shackles of accountability — unless doing so would imperil his status.

But in these days of instant imagery, it is the ‘visual’ vote which is more effective than the ‘spoken’ vote. Bald men do not win elections in the age of television. Integrity is subordinate to a nice haircut, so the con men nearly always win the elections.

The icon of uprightness Franklin Delano Roosevelt was crippled and wheelchair-bound for the final years of his reign. This fact was kept from the general public because the idea of a ‘cripple’ in the White House was deemed unacceptable. That was in a different and less ‘instant’ age, but the aim was to hide and to deceive just the same.

Douglas Adams tells us in The Hitchhiker’s Guide to the Galaxy that anybody who stands for election is eminently unsuitable to be a political appointee, but that those who are suitable would never dream of standing for election. This self-defeating maxim is horribly true, and is probably the major weakness in any democracy.

In the USA the founding fathers wrote the Constitution specifically to limit the powers of malevolent politicians. But politicians who are obliged to swear to uphold the Constitution, have, like the Pharisees of the New Testament eroding the Torah, wheedled away at the Constitution until it has become meaningless junk. As a result, the Senate is a “brood of vipers”, the House is a “synagogue of Satan” and the White House “a whited sepulchre” led by a President who behaves like Simon the Magi.

At the heart of this dark and deadly pit is a corrupt mainstream media, a media which appears to have been hijacked by the forces of Cultural Marxism on a worldwide basis.

Such is the state of politics that politicians have become the deadly enemy of the average Joe-in-the-street of a Western city. Political fashion now supports the mugger, not the mugged. It protects the Muslim paedophile rapist rather than his child victims; it supports the violent Islamist rather than the peaceful Christian.

But of course Ali is not a threat to the corrupt regime that arms him, whereas Joe is empowered by his Constitution to challenge, with force if necessary, the ruling elite.

The world has become like a Hogarth cartoon, and we are the baby falling into the abyss. 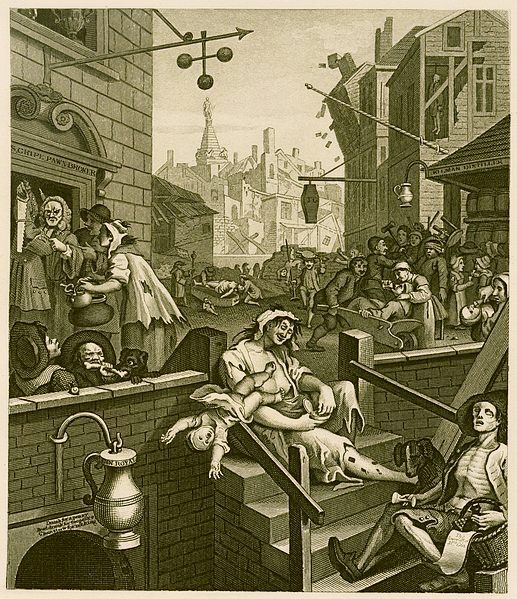 At that time (circa 1751) Britain was in the thrall of bathtub gin: “drunk for a penny, dead drunk for tuppence”. In the modern age the mind bending power of TV poison far exceeds the value of moonshine as an intoxicant.

The Media fails us in two ways: it has stopped holding governments accountable, and it is a willing participant in the mind-control programmes of Cultural Marxism.

As a result, there is no effective limit on government power around the world. For most governments nowadays, the ends justify the means and the people be damned.

We can smile and say blithely “all is fair in love and war” but when we add politics to this maxim it is time to “be afraid, be very afraid”, as Wednesday Adams would say!