I ask your patience while the Baron is away.

There have been various technical glitches beyond my ken. For one thing, our blog host decided to “migrate” things beginning last night. I’ve no idea what that means but I do hope they’re done and that all the numbers they emailed to us are not anything that can’t wait till the Baron gets home.

Oh, and the mail is also having problems but that is a separate issue. Our ISP person seems to be away at the moment and was vague about when she’d return. I have an idea she’s in Europe but I didn’t ask so she wouldn’t have to lie to me.

Regarding our hosting problem, this “migration” meant I couldn’t get in to post or to moderate comments. I believe that for some of the time, readers weren’t able to access the home page either.

There’s an additional problem that can be handled more easily when the Baron is around. When I let comments in, they don’t always show up, even though I’m seeing “zero comments” awaiting moderation. Thus I have to wait to see which ones are ‘really’ in. Some of them have been through this four or five times – I apologize if yours was one of them.

Even the Baron has difficulties with this sometimes – it’s a Word Press ‘feature’, I’m told. But his computer upstairs is much closer to all the gizmos – router and such – so his moderation is much quicker than mine. When it works, that is. However, he says they don’t always go in on the first try for him, either. 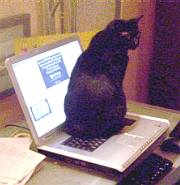 In addition, it’s hard to lose a pet, harder than I was aware of at first. After the children were grown and there was nothing left to mother, there was still the garden and Lulu, as freaky and neurotic as she was (and as stubborn as plants can be sometimes). The vet told me that this particular cat had inherited a “fear” gene from her paternal side and when cats are born that way, you can’t calm them down completely. So I gave her an anxiolytic every day and she got to live life somewhere other than under the bed.

But her “nerves” were also due to the influence of a calico we had back before Lulu made her way into the church hall one Sunday when we were having lunch. When she arrived – perhaps drawn by the smell of food – I recall that she was friendly enough. It was George’s influence after we brought her home that kind of flipped on that epigenetic process. Had she never met George, she’d have been more ‘normal’ – though we are talking about a cat after all.

George was a male calico. Males are quite unusual so we presumed that we had a cat named Geneviève until it came time to have “her” spayed (we never looked – go figure). The vet told us “she” was a male, a 10,000 –in-one ‘sport’. Even though they are sterile, you have to neuter male calicos anyway. They don’t know they’re sterile and they’ll spray things when they get older. So we went into the vet’s with Geneviève and left with George. Yes, the vet’s name was George.

Anyway, a friend came the next afternoon and helped me dig a hole for Lulu’s body, out near our large pile of shredded wood chips left from the last time they came to trim the big oaks. We have that done to keep the house safe from leaning limbs. I had planned to bury her nearer a wild azalea but…the bear changed that.

Let’s see. Lulu died about sunset. I let her lie where she was for a while, not willing to disturb her yet. Then I began a post, but fell asleep, probably exhausted from that death watch. Several hours later, there was a lot of noise on the porch. I woke, startled, thinking at first it might be a dog after Lulu. Lost hunting dogs come through our yard sometimes and if we can catch them, they get tied to the Paulownia tree and we call the owners. Lulu is way too fast for them to ever get near her but they sure can howl when they spot her up in the branches.

It was only as I walked to the door to turn on the porch light that I saw Lulu’s body under the console table, her face turned to the wall. There was a momentary frisson of remembrance. Oh. Right. Lulu was safe; she’d never have to run from a dog again.

I turned on the porch light but by then whatever had been making all the noise was gone. The large Amazon box I’d left by the glider was ripped open and the contents – a dolly I’d ordered so I could get the new monitor into the house when it came – was lying on the grass. I went outside to retrieve the box and the dolly. It had rained all day and there were large, sloppy wet footprints on the porch and steps. The container of grass seed was spilled.

What th? – as the Baron would say.

After a few moments, rational thinking kicked in. I assured myself no one was going to walk down our half mile driveway in the rain and dark just to tear that big Amazon box open and scatter grass seed. My visitor had been a darn bear, and from the size of the paw print (looks a little like a human print without the heel) he was larger than our average bear come to call.

Lulu had a spicy burial. I had put lots of pepper seeds in her plastic shroud and then, following a bit of dirt laid on top of her body, more cayenne. More dirt, more cayenne. We finished it off with rocks, though you’d need a three hundred pound boulder to really discourage a bear – the rocks were more for us – and to be able to show the Baron when he comes back – than for any effective deterrence. After that we lay the wheelbarrow on top, upside down, with more pepper. Mike left me with the rest of the jar for later applications if it rains soon. I think I’ll make a liquid mixture too and spray the raspberry canes, or what’s left of them. Won’t the deer be surpised!

This morning I was able to pry several emails open. This was one, from a reader in Canada. When I saw the subject line – “Goodbye” – it worried me. Was she leaving? No she wasn’t as it turned out. This was the message:

Adieu, Lulu
Miouw no more,
Nor scratch the door!
Adieu!

In heavenly fields
You climb the trees
Surprising squirrels
At their ease,
Adieu…

19 thoughts on “While The Baron is Away…Chapter the First”