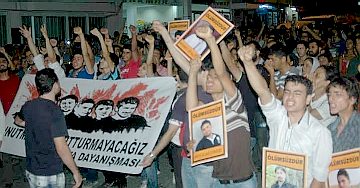 The summer vacation is over, and Turkish college students are returning for the fall semester. As predicted early in the summer, with the arrival of the students the unrest and demonstrations against the government of Prime Minister Recep Tayyip Erdogan have resumed. One young man was killed last week, and further protests have arisen in the wake of his death.

Many thanks to JLH for translating this article from Deutsche Welle:

After a phase of comparative calm, violence returns to the streets of Turkey. The death of a 22 year-old demonstrator set off street battles in several cities. Observers expect a “hot autumn.”

Ahmet Atakan was struck in the head by a tear gas grenade, eyewitnesses said. Government representatives say he fell from the roof of a house, What is certain is that Ahmet Atakan is dead. And once again the conflict is ablaze between critics of the administration hitting the streets and police representing the regime. Once again, demonstrators are accusing the police of reacting with unnecessary severity against really harmless demonstrations. In Istanbul, in the early morning hours, the two sides had serious confrontations.

On Monday evening (9/9/2013), Atakan was the sixth demonstrator killed since the beginning of the anti-government demonstrations in June. A police officer also died in those demonstrations, which had flared up at a building project in Istanbul’s Gezi Park. And they have flared up again with the end of summer vacation.

Reasons for unrest are the same

Representatives of the government and of the protest movement agreed in predicting that new tensions could be expected in September at the beginning of winter semester at the universities. There was talk of a “hot autumn.”

The reasons which drove the alliance of anti-regime groups onto the streets in June are still present. The protest movement accuses Prime Minister Recep Tayyip Erdogan of authoritarian tendencies, arrogance and contempt for the opinion of dissidents. To be sure, the regime pledged improvement in June, but nothing concrete has been done. At the moment, it intends to accomplish the construction of an expressway through a campus of the Technical Near East University in Ankara with a large stand of trees. There is talk of protests against that, too.

The regime is sticking by its line that there are no seriously dissatisfied citizens behind the protest movement, but political opponents of Erdogan, who want to bring the Prime Minister to his knees through the power of the streets. On Twitter, Mustafa Varank, adviser to Erdogan, accused the protest movement of spreading hate and lies using the death of the demonstrator Atakan, and of using “tactics of psychological warfare.”

In the face of such reactions, the protest movement is sure that it will find little understanding for its concerns from the state, at least for now. Süha Yilmaz, a member of a protest forum in Istanbul, told Deutsche Welle that he expected mounting tensions. “Everyone thought that September would be pretty hot, and that seems to be happening.” Yilmaz sees no signs of the regime backing. down. “They have started killing people again,” referring to the death of Ahmet Atakan. “They are not giving an inch.”

Criticism of the Protest Movement too

The protest movement must also accept some criticism. In the latest confrontations in Istanbul this week, several demonstrators threw Molotov cocktails and shot fireworks at police. This tendency towards violence causes discomfort among some sympathizers of the movement. A bar owner in Istanbul, who in his own words supports the demonstrators’ demands for more democracy and civic involvement, told Deutsche Welle of young people who stormed into his place and asked for empty bottles to throw at police.

“I threw them out on their ears, They just wanted a riot,” said the bar owner who did not wish to have his name known. In the first phase of the Gezi protests in June, many ordinary citizens were among the demonstrators, he recalls, but then radicals dominated more and more. “After the first two weeks, it changed,” he said. That is not a good sign fort the coming months.”