When the “Putin for President” campaign started last week, it didn’t seem like it would be much more than a brief (but very amusing) joke. Yet the meme seems to have legs, as if it is an idea whose time has come. The MSM does its best to demonize the Russian president, yet somehow the fever swamps of teh interwebs have decided that they like the cut of his jib.

After I put up the first Putin poster the other day, the cartoonist Baloo made his own version for the Ex-Army blog. In his accompanying text he says:

When I came across the graphic above over at Gates of Vienna, I got to thinking that maybe the joke element is receding a bit and there’s an edge of seriousness developing. Take a look at the prospects for the next election. You want Vlad or Hillary? See what I mean?

Here’s Baloo’s contribution to the new groundswell for Pooty-Poo: 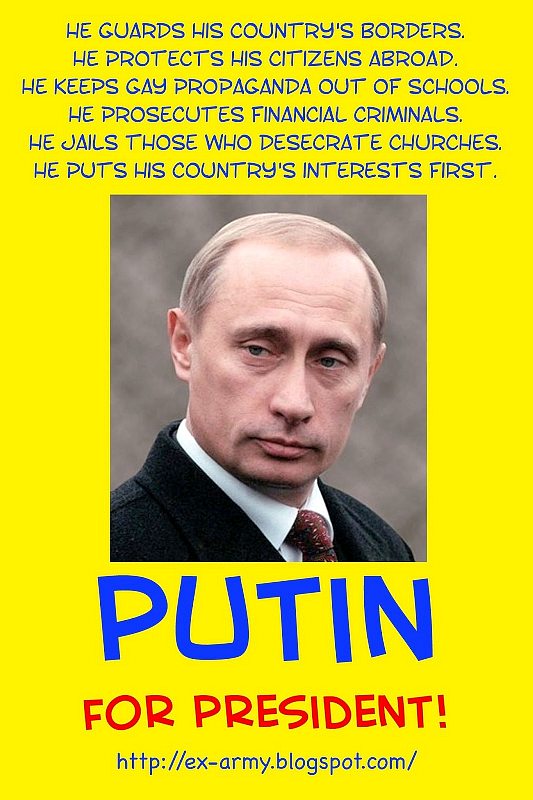 That sums it up nicely, doesn’t it?

When people take up the Putin-for-Prez meme, it doesn’t mean they really want a Russian autocrat in charge of the USA. It means that they recognize that Vladimir Putin is a Russian nationalist who puts the interests of his country above the interests of “the international community”, and that strikes a chord with them.

My intuition — not to mention the opinion polls — tells me that an overwhelming majority of American citizens are disgusted with all of their political leaders at the national level. To paraphrase John Nance Garner, none of the current batch is worth a pitcher of warm body fluids, nor are any of the future hopefuls queued up as far as the eye can see. They are corrupt, cynical, immoral, and ready to sell their country to the highest bidder.

Vladimir Putin is a reminder that it is possible for a national political leader to represent the interests of his own country effectively on the international stage. Notwithstanding the ruthlessness and brutality of his methods, one cannot help but admire Mr. Putin’s chess-playing skills in his conduct of foreign policy.

The United States is unlikely to elect such a leader anytime soon. Not before the Collapse, anyway. Our culture and politics have become too debased for us to act that sensibly.

11 thoughts on “Some Days the Bear Eats You”