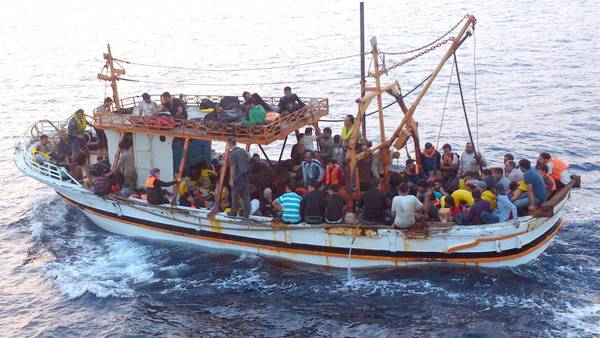 Our German translator JLH has translated a series of articles from 2011-2013 about what I call the “Camp of the Saints” flood of immigrants pouring into Lampedusa, Malta, Sicily, Sardinia, Greece, and the far south of the Italian mainland. Most of the migrants come from the Middle East, North Africa, and sub-Saharan Africa. The largest wave was in 2011, during the height of the “Arab Spring” in Libya and Tunisia. This year has seen a renewal of the flow, mainly from Egypt and Syria.

These four brief articles suggest the price that is being paid by countries that border the Mediterranean. They are not only most immediately affected by the deluge of refugees from Africa, but are the most ignored, if not despised by their more land-bound brethren, who care only that they not pass on the contagion that has reached and overwhelmed them.

Never a better example of NIMBY (“Not in my backyard”).

The first article is from Blick:

Valletta — As the wave of refugees from north Africa heading for Europe increases sharply, Malta is giving the EU an ultimatum: Either Brussels gives Malta more support in battling illegal immigration or the immigrants will be systematically sent away.

“It is time for Europe to develop a genuine and solid strategy as an answer to the crisis in the Mediterranean area,” declared Premier Joseph Muscat, according to the Italian news agency, ANSA on Friday. Muscat spoke on the telephone with EU Council President Herman Van Rompuy and asked for support for Malta. The island, he said, had recently accepted 300 immigrants. Nine of them were sent to the hospital in critical condition. Three of them had gunshot wounds.

The next article was published in Der Spiegel:

France reacts to the flood of refugees from Africa. A train of Tunisians from Italian Ventimiglia was temporarily stopped at the border. The government in Rome protested that they had presented papers which allow the immigrants to travel on into other European countries.

Rome/Paris/Ventimiglia — On Sunday, Italy protested against France’s refusal to allow Tunisian refugees into the country. This was an “illegitimate and clear violation of basic European principles,” was the word from the foreign ministry in Rome. Italian Foreign Minister Franco Frattini said that he had directed their ambassador in Paris “to communicate the express protest of the Italian government.”

Maurizio Furia, spokesman for the Italian Railroad, said that France had prevented the train from Italian Ventimiglia to French Menton from continuing. The rail line was released on Saturday. The responsible prefect had issued a directive, reported the regional newspaper, “Nice-Matin.” In the morning, he had temporarily halted train traffic because of a possible threat to public order. And, the story went, human rights activists had wanted to travel with the Tunisians because of an unannounced demonstration.

Recently, Italy had begun to issue residence permits to Tunisian refugees who had come from the North African country to Italy by the thousands after the revolution.

With the permits, according to the Italian government, the refugees may travel without a visa into a number of European countries, including France. France let it be known, however, that it would only accept the ones who had the appropriate financial resources to find employment and/or accommodations. In an interview with TV channel Sky TG24, Interior Minister Maroni said: “We gave out immigrant travel documents and the EU Commission recognized them. It declared that Italy was adhering to the Schengen Rules. Freedom of travel is open to anyone who has the proper papers and wants to go to France.”

France found some support in Germany. Bavarian Interior Minister Joachim Herrmann (CSU) criticized the Italian authorities for giving temporary residence permits to Tunisian refugees, and expressed understanding for Paris’s attitude. The behavior of the Italian government, he said, was going too far, according to an early report in the Passau New Press. Italy’s actions “clearly violated the basic principles of partnership in Europe and the spirit of Schengen and Dublin II.” According to the report, he further said “This undermines all the agreements we have reached. In south Bavaria, we are using random police checks to see whether anyone is coming into Germany by such means.”

The third article is from Blick:

Athens — On Tuesday, hundreds of Greeks and immigrants demonstrated against the toughening of immigration policy. They warned against the possible entry into parliament of the fascist party Chrysi Avgi in the May 6th election.

The demonstrators ran through the inner city to parliament. Speaking in chorus, they opposed the “hunts” for immigrants organized in several poor sections of Athens by Chrysi Avgi (Golden Dawn). Leading the march of demonstrators was a banner in Greek and English which read “No to concentration camps!” Greece has endured a flood of refugees for years and is overwhelmed by the situation.

The country does not have sufficient reception centers. Applications for asylum are processed sluggishly. Several EU countries have fired off a deportation ban at Greece. Europeans for Human Rights has in past years sharply criticized the taking into custody and living conditions for asylum seekers in Greece.

And the final article, also from Blick:

Uncertain Living Conditions for Immigrants Without Papers in Morocco

Bern — The aid organization, Doctors Without Borders (MSF) has published a report showing the conflict between European immigration policy and the fundamental human rights of immigrants in Morocco.

In the report, “Trapped at the Gates of Europe,” the uncertain living conditions of undocumented immigrants from countries south of the Sahara, as well as the widespread criminal and institutional violence against them, are addressed. Morocco, it says, is being forced to change — because of increasingly stricter border controls in the EU — from a transit country to a residential destination, and this makes the immigrants still more vulnerable. The implementation of an immigration policy which undermines human rights is having its effect on the health of the immigrants. Among others, there are also victims of sexual violence and of human trafficking, who received no particular support or protection from the authorities, the report says.

Further reading: The articles below, all collected within the past week for the news feed, concern the current wave of illegal immigrants on the European side of the Mediterranean: