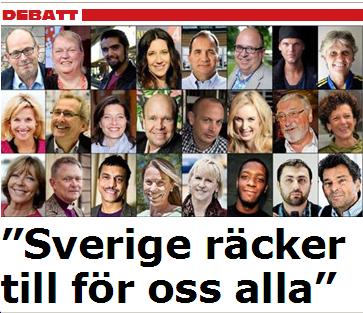 “Sweden is big enough for all of us.”

For regular readers (especially those in Scandinavia) it’s no surprise that Sweden is in the midst of yet another public initiative to stamp out hate and discrimination based on race, religion, gender, sexual orientation, number of body parts, species, and planet of origin.

OK, I admit I made up the last two. But still…

A group of Swedish celebrities and public figures has issued a manifesto called “A Sweden for all of us”, and has called upon others to join up and show their solidarity for “the Sweden we believe in”. Given that Sweden is just as much a jantelagen society as Denmark or Norway, the push to become part of the consensus is all but irresistible. More and more of the glitterati have signed their names to this universal invitation.

It’s no coincidence that this appeal emerged concurrently with the official proclamation that Sweden welcomes all Syrian refugees and their families. This is a blatant attempt to ensure that no respectable person dare voice his disagreement with the new policy. And it’s obviously a thinly-veiled attack on the immigration-critical Sweden Democrats, whose position in the latest polls is running at about 10%.

Many thanks to our Swedish correspondent LN for translating this piece from Aftonbladet. From the sidebar:

Xenophobia that penetrates into our daily conversation will no longer be met with silence — support a Sweden for us all, write Jan Scherman, Ingela Edlund, Katrin Ludvigsson, Navid Modiri and Anna Ryott, along with several hundred known and unknown Swedes. Manifesto published today in Aftonbladet and Expressen. So support the initiative “A Sweden for all of us”: the writing on ossalla.nu. Here’s the campaign on Twitter.

A dangerous xenophobic wind blows over Sweden. It forces its way into our everyday conversations. It’s loud in public debate. But silence is no answer. Today is the beginning of our call for the Sweden we want to live in.

Now we raise our voices for a Sweden for all of us. The country we believe in, and the tolerance and diversity that best of all can handle present and future challenges.

We are 489 signatories today. We become more all the time. The petition and a range of other activities start today and will continue. For weeks, for months and years if necessary.

Sweden has for centuries been racially enriched with people who come to our country for many different reasons. During periods there has also been a great exodus. Such as during the last century, the first year in which Sweden was a country with widespread poverty and famine. That we move beyond national borders is nothing new. Immigration and emigration have always been a part of our society and thus become a part of our culture. Diversity in public life all share. It gave and gives us inalienable values.

Trade, business, employment and economic development are enhanced when we move across borders. Workers from all over the world have for decades helped to build a strong Sweden. We have been inspired by the new culture — art, literature, music and food.

We also have over the years shown humanity by accepting people who have fled war, dictatorship and persecution. We have become a safe place where it was possible to live and develop. This is a central part of our democracy.

Meanwhile an unpleasant wind sweeps through Sweden. People are exposed to harassment and violence because they have backgrounds from other parts of the world. Prevalent prejudices are heard in everyday conversation. The voices have been loud — those who claim that some are lazy, others are criminals, some are taking jobs away from us.

We hear the biased discriminatory words in public discourse and we hear them in everyday life. That wind sweeps across the break room at work, at lunch, at the restaurant or the Friday party. It manifests itself on the internet and can be heard all the way to the debate in municipalities and parliament.

We strongly feel uncomfortable about these myths, which categorize and blame people. We know what happens when it’s us vs. them. The evidence of history is frightening.

All of us who live here have a responsibility. We cannot transfer it to someone else. Everyone is responsible for what kind of society our children and grandchildren will grow up in.

The power and ability to cope with present and future are within ourselves. It is we who decide.

We want you to do as we do — speak up and stand up for a Sweden characterized by equal opportunities, rights and responsibilities for all. Where fear and prejudice are replaced by insight and understanding of each other’s similarities and differences.

Bring down racism, xenophobia and discrimination. Stand up for a society where we are stronger together.

We are pleased that there are now more and more initiatives for the Sweden we believe in. We want this text to invite organizations, individuals and businesses to take a stand for our appeal and that together we promise each other to resist the prejudices that abound.

Support our appeal for a Sweden for all of us!