Hans-Peter Raddatz is a German scholar who specializes in Islam, sharia, and the Middle East. He was interviewed on Deutschlandradio last Saturday on the topic “Wildly escalating financial influence from Islam.”

Many thanks to JLH for the translation (see the bottom of this post for links to previous translations of Hans-Peter Raddatz): 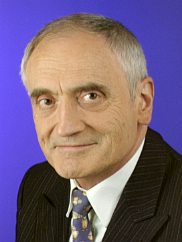 Orientalist warns of growing influence of Islam in Europe

Given their interpretation of Islam, the Muslim Brotherhood is not equipped for democracy, says Hans-Peter Raddatz. That is, Muslims, who are raised in a very religious environment are not free in the exercise of their will. So the democratic rules of play in Europe are “frayed away” by Muslim immigrants.

[The interviewer is Jürgen Liminski.]

Previous posts by or about Hans-Peter Raddatz:

12 thoughts on “The Visible, Gradual Surrender of Sovereignty”