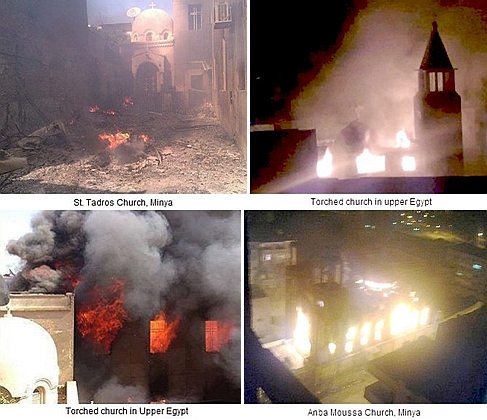 Churches are burning in Egypt as fast as Muslim Brotherhood supporters can pour the gasoline and light the fires. Of those spared from the flames, some are being used as mosques, hosting Islamic prayers this past Friday. And al-raya — the black flag of Jihad — has been raised over St. George’s church in Sohag.

Here’s the report from AINA:

(AINA) — Since ex-president Morsy’s ouster on July 3, attacks on Egyptian Christians by members of the Muslim Brotherhood have taken place in most governorates across Egypt. These attacks have escalated since security forces ended the pro-Morsy protests in central Cairo on August 14th. During their 6-weeks of protests, Muslim Brotherhood leaders explicitly threatened to harm the Copts should they be forced to end their protests, which they vowed to prolong until Morsy is restored to power.

“Over the past weeks we have witnessed an increasing trend of anti-Christian rhetoric calling for ‘the attack upon and eradication of Christians and churches’ in Egypt,” said Coptic Bishop Anba in the United Kingdom. “The result of such incitement, at least in part, has been the unprecedented attack on fifty two churches and numerous Christian homes and businesses across eight governorates in Egypt, within the space of twenty four hours.”

Yesterday Dr. Naguib Gabriel, President of Egyptian Union of Human Rights Organization, said “82 churches, many of which were from the 5th century, were attacked by pro-Morsy supporters in just two days.”

The Pope said the Church is on “the side of Egyptian law, the armed forces and all the Egyptian civil institutions when it comes to confronting violent armed organizations and terrorizing forces, either within the country or from abroad.” The Pope pointed out that one should look beyond the squares where the Muslim Brotherhood have been holding their protests, in order to gain a general overview of what has been happening for weeks in Egypt. “The attacks on government buildings and peaceful churches terrorize everyone, whether they be Copts or Muslims. These actions go against any religion, any moral code and any sense of humanity.”

The Coptic Church also criticized the way in which the crisis is reported outside of Egypt. It expressly speaks of “false broadcast by Western media,” and urges for an “objective” revision to be made of the descriptions given to the actions of those “blood-thirsty radical organizations.” The Coptic Orthodox Church says that “instead of legitimizing them with global support and political coverage while they are trying to wreak havoc and destruction upon our beloved land, report all events truthfully and accurately.”

Pope Tawadros reaffirmed his support for “national unity” and rejected any form of “international interference in our internal affairs.”

The Pope is at the top of the Islamists’ assassination list.

The views of the Coptic church are also held by Copts in general, who are angry with the US and EU powers, “who almost daily issue statements threatening to take further actions against our interim government and army, portraying the Muslim Brotherhood as victims while not even mentioning the destruction of over 80 churches, as well monasteries, orphanages, businesses and Coptic schools by the Muslim Brotherhood,” says Coptic activist Wagih Yacoub who believes that this western attitude emboldens them to carry out further violence. “To add insult to injury the Muslim Brotherhood this week hoisted the black Al-Qaida flag on top of St. George’s church in Sohag. Three churches were turned into mosques in Minya and Friday prayers were held inside them.”

16 thoughts on “The Black Flag of Jihad Flies Over St. George’s”