The following essay by Russkiy is the latest in an occasional series on liberals and reformers in the Arab world. In this piece he introduces us to Ibrahim Albleahi, an unusually iconoclastic Saudi intellectual.

At the end of his essay is a subtitled version (Russkiy’s translation) of a video interview with Albleahi from Saudi television. 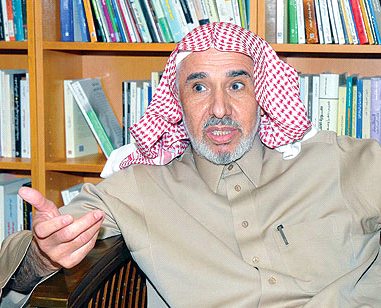 Reformation of Islam: Is it a Possibility?

I have long been interested what is sometimes referred to in the Arab world as the Arab liberal movement. This is the first instalment in a series that I intend to write to discuss attempts by some Arab intellectuals to alter the trajectory of the Arab world.

The concept of liberal Islam or liberal movement within Islam contradicts my understanding of the underlying principles of Islam, and hence had puzzled me for a long time. I have previously written articles at Gates of Vienna concerning this subject. I discussed such figures as Ali al Wardi and Ahmad al Gubanchi. The next instalment I would like to do is to discuss in detail Ahmad al Gubanchi’s theory.

In this post, however, I would like to introduce Ibrahim Albleahi, a Saudi critic of Arab and Muslim societies, whose views largely match those of Fjordman. I understand that Fjordman is proficient in Arabic and therefore invite him to refer to Albleahi as proof that his views on Western Exceptionalism are also espoused by some objective thinkers among Arabs and Muslims.

Albleahi, as seen in the photo at the top of this post, insists on wearing the Arabian shimagh or kaffiya without the black woollen rope known as agal. This is important because in Saudi Arabia, the people who don’t wear agal are usually the Wahhabi clerics and people who are very religiously observant. Most other males wear agal. I believe he insists on not wearing it to remove the suspicion that he is an atheist. I would like to quote from Albleahi’s Wikipedia entry:

Ibrahim Albleahy is a Saudi liberal writer, thinker and philosopher who is currently a member of the Saudi Shura Council.

Albleahy has held a range of positions in government and business throughout his life. Aside from his position on the Shura Council, he is involved in a variety of organizations in Saudi civil society. While he is a devout Muslim, he is highly critical of the way Islam is publicly practiced and the degree to which modern Muslim societies are governed by it.

The central concern of his writings is the relative decline of Arab and Islamic civilization, compared to the other civilizations of the world. From his studies he has concluded that Western Civilization has several deep cultural principles that make it more dynamic, more open-minded and therefore able to develop faster, through empowering individuality and independent thinking. These principles developed in the West over centuries, beginning in Ancient Greek philosophy and gaining power in the Age of Enlightenment.

He concluded that other (non-Western) cultures, such as Japan, were able to advance to a high level of development and freedom only by taking and incorporating these crucial principles from the West. By incorporating these principles in their culture, countries such as Japan managed to actually invigorate their culture and prevent it from stagnating, while simultaneously matching the West in power, freedom and standard of living.

He blames the failure of Arab societies to develop and innovate on their refusal to learn from other civilizations or to criticize the principles of their own society. He advocates the incorporation of modern Science and critical thinking in the heart of Arab culture, as it was in Japan. Thus while Arab public society would develop along free, modern and self-critical lines, the heritage of Islam would still provide the spiritual backbone of Arab civilization.

“… the situation in Saudi Arabia is sad and shameful, so it is clearly necessary not only to be concerned but to be deeply anxious. I learned early in my life that a dreadful flaw afflicts the lives of others, but at first I did not understand the reasons. My deep anxiety impelled me to study our history and culture in depth in search of the source of the flaw, and also led me to devote attention to the triumphant Western civilization, beginning with Greek philosophical thought, continuing through the political, social, scientific, anthropological and other achievements of the West. I became convinced that Western civilization is exceptional and pioneering, and is not an extension of the previous civilizations: it is civilization par excellence. The excellence of the West lies not in its accomplishments in the sciences, arts and technology, but rather, these accomplishments are the outgrowth of the West’s respect for profit, the free system, its liberty, and the establishment of government in the service of the people—the government belongs to the people, and they do not belong to it as like in all other countries of the world. This is a qualitative change, unprecedented in human history, and the source of everything that the human being experiences of the amazing changes in all aspects of life.”

The above description for Ibrahim Albleahi states that he is a devout Muslim. Anyone familiar with the foundations of Islam, the Quran and Sunnah, can’t help but wonder how a devout Muslim can enjoy a high level of critical thinking. Albleahi often refers to the turning point of Arab culture, i.e. when it became tyrannical and backward, is the end of the rule of “the Rightly Guided Caliphs”, Abu Bakr, Umar, Othman and Ali. This of course is nonsense, as any reader of the Islamic history of that period would know that it was distinguished by conquests, blood and infighting. The Islamic sources all confirm this assertion; one of the clearest pieces of evidence for this is killing of Othman on the order of Aisha, the young wife of Muhammad, as well as enmity between Ali and his followers and the rest of Muhammad’s companions.

Albleahi in his discussions avoids at all cost talking about religion. When he is asked about the role Islam plays in the poor state of affairs in the Muslim world, he responds to that by saying that Islam is innocent of that and that misuse and misinterpretation of it as well as ingrained cultural qualities of Arabs are the responsible factors.

In his assertions he doesn’t distinguish between the Arab/Islamic culture and other backward cultures such as African, Asian or Latin American; he places them all in the same category against the modern Western culture and its outgrowth into East Asia. He says that all cultures are in their origins backward, not accepting of the ideas of others, self-glorifying and not critical thinkers. According to him all cultures are moving on their cultural inertia, where individuals from an early age are pre-programmed to behave in a certain way. He observes that people in most countries are identical in that they are living their lives without understanding reasons and factors contributing to their cultures’ successes or failures.

In his view, the qualitative change in human thinking and development happened in Greece, then was continued by Romans, with European culture being a natural successor to the Greek civilisation. He categorically rejects any suggestion that Western Civilisation was influenced in any positive way by any other culture, especially Islam. He argues that celebrated Islamic scientists such as Ibn Rushd, Ibn Sina, al Razi and al Khwarizmi did not develop anything new, but rather provided commentary on the thoughts and works of the great Greek philosophers. His view is that the Islamic world has no right to claim these thinkers as the product of Islamic Civilisation, as even to this day, their ideas are overwhelmingly rejected by it.

My personal opinion, based on watching many of his interviews and having read a couple of his books, is that he is unlikely to still be a Muslim. His insistence on avoiding direct discussion of religious matters is a proof (for me at least) that he has no real arguments to exonerate Islam and therefore for his personal safety he uses boilerplate statements such as: “Islam’s message of tolerance, equality and justice has been twisted and reshaped into the instrument of oppression by the early Muslims.” I have discussed with Saudi atheists in Paltalk chat rooms the possibility that he is an atheist practicing taqiyya pretending to be a Muslim. They have confirmed the accuracy of my understanding of the matter. That is, for anyone, especially highly-positioned public figures in the Arab/Muslim world, to state anything other than “I am a devout Muslim” will result in an end of a career, social isolation, a term in prison and in extreme cases such as Saudi Arabia, a death sentence.

At this point I would like to ponder the reasons why philosophical ideas and critical thinking have been adopted by Western Civilisation and more recently by East Asia whilst the rest of the world, as argued by Ibrahim Albleahi, seems to be incapable of doing the same. The recent post at Gates of Vienna entitled “Outsmarting Ourselves” seems to explain this phenomenon by the fact that populations in different parts of the world have unequal IQs. For a society as whole to adopt new ways and ideas, a critical mass of people interested in the change is required. This critical mass would consist of people philosophically predisposed and curious. I don’t know whether IQ is a good indicator for a philosophical predisposition and curiosity. There are many people around me who appear to be intelligent enough in that they are high achievers, but at the same time are not philosophers nor curious by nature.

Here’s a translated interview with Ibrahim Albleahi for Gates of Vienna readers:

17 thoughts on “Reformation of Islam: Is it a Possibility?”