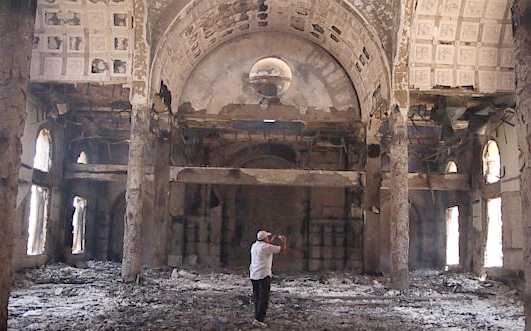 The plight of a Jesuit school in the Egyptian city of Minya reminds me the fable about the frog and the scorpion. For those unfamiliar with the story, it runs something like this:

A scorpion persuades a frog to carry him across a river by arguing that if he were to sting the frog, both animals would die.

The frog complies with the request, but halfway across the river the scorpion stings him. Before he drowns, he asks the scorpion, “Why did you sting me? Now we both shall die.”

The scorpion replies: “Because it is my nature.”

The Jesuit school in Minya, unlike a nearby church and orphanage, is still standing. But probably not for long — the supporters of the Muslim Brotherhood and deposed President Mohamed Morsi have been demonstrating in front of it, and a violent attack seems all but inevitable.

Yet three-quarters of the school’s students are Muslims, so when it is eventually reduced to a charred ruin, the children of the local Muslim community will be denied an invaluable Jesuit education.

Because it is their nature.

Here’s the report from Asia News:

“We Live in Fear of More Violence, “ Says Indian Jesuit

Head of the local Jesuit school, the priest describes how the Christian community is targeted by Islamists on a daily basis even though three quarters of its pupils are Muslim. Minya residents complain that things are out of control in their governorate as Islamists vent their rage indiscriminately.

Minya (AsiaNews) — “When they march in front of our church during demonstrations organised by the Muslim Brotherhood, protesters are amazed that the building is still there,” Fr Bimal Kerketta told AsiaNews.

Originally from India, the priest has been in Egypt for ten years working as the principal of the school run by the Jesuit Fathers in Minya.

“Each day, they gather in front of the building to shout slogan of intimidation. I fear that tomorrow’s event will lead to fresh acts of violence.”

Minya Governorate, which is located on the Nile south of Cairo, felt the brunt of the Islamist wrath following Mohammed Morsi’s removal from power.

Many local sources describe a city out of control and left to fend for itself.

“Fundamentalists have burnt and destroyed everything,” a resident told AsiaNews. “Their aim is to remove all traces of a Christian presence here. Even orphanages have been looted.”

The Islamist rage fell especially on Christian schools and churches, but also on museums and anything that stood for modernity. One of the country’s main museums of ancient Egyptian art is located in Minya and was recently damaged and looted, with about a thousand pieces stolen.

For the authorities, some members of the Brotherhood were among the thugs that attacked the building.

Since 30 June, when the President Mohammed Morsi was ousted, at least 12 churches have been torched and destroyed in Minya alone.

The number of buildings affected goes up to 20 if orphanages and other Christian-run facilities are considered.

Islamists often strike at random and indiscriminately, ignoring the fact that at least one of the buildings to which they set fire was open to Egyptians of both confessions.

“Ours is an Arab school, from kindergarten to middle school,” said Fr Bimal, who has been in Minya for five years. “Seventy-five per cent of our pupils are Muslim.”

11 thoughts on “Next Target: A Jesuit School”