Update: A commenter named gatekeeper has kindly provided us with this image of “The Blot”: 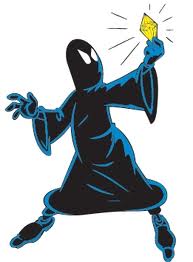 Our Norwegian correspondent The Observer has translated an article from today’s Dagbladet about the latest culturally enriched criminal incident in metropolitan Oslo: a jewelry store heist by a robber wearing a burka.

The two robbers may be Somalis — tall and thin: that’s a pretty accurate description of male Somalis.

The jewellery shop could be operated by Indians. Judging by the name, I don’t think it’s run by Norwegians or Jewish persons.

There’s also an article about the case in ‘News and views from Norway’. It doesn’t mention anything about the burka, however.

Here’s the CCTV footage of the fleeing burka robber

Security cameras caught the robbers’ dramatic escape after the brutal robbery at Vestli.

VESTLI (Dagbladet): One of the security cameras inside a Prix grocery store located vis-à-vis Lakshmi Jewelers, which was held up by armed robbers earlier today, captured the escape of one of the robbers.

One of the perpetrators was wearing what appears to be a light blue or purple burka. This has also been confirmed by several witnesses.

The armed robbers struck just before 1:30pm today at the jewelry store located in Vestliveien. Witnesses have told Dagbladet that they heard screaming coming from inside the store and that they saw the perpetrators run away from the scene.

“The perpetrators were armed with a shotgun and a revolver. We don’t have all the facts yet, but I can confirm that we have received reports that one of the robbers was wearing a burka and that the pair managed to get away with some valuables,” says Erlend Storaker, the chief of operations, to Dagbladet.

Both robbers fled on foot, and the police are treating this as a very serious crime. They have launched an extensive operation with armed police patrols, dog squads and a police helicopter.

In addition to interviewing witnesses, the police have also secured CCTV footage from the jewelry store.

“There are also people engaged in intelligence gathering at the scene trying to figure out who may have been behind this robbery,” says Ingunn Braseth, the supervisor of the crime squad at Oslo police station, to Dagbladet.

Armed police have blocked off the main arteries leading out of the city.

A description of the perpetrators has been released:

Both robbers are approximately 190 cm tall; they are both thin and are described as dark-skinned. One was dressed in a black raincoat/top, white sneakers, blue jeans and carrying a black umbrella. The second person was wearing black and green sneakers with white soles and black jeans. This person was also dressed in a blue/green burka during the robbery.

One thought on “A Burka-Clad Jewel Thief”