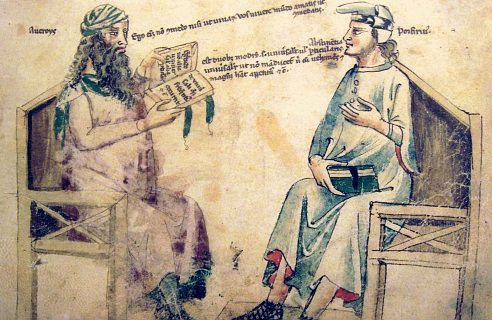 Our regular readers are aware that we like and promote Emmet Scott’s work.

His amazing book, Mohammed and Charlemagne Revisited dramatically changed our understanding of the roots of Western culture and the extent to which those roots were deformed by fear. His knowledge, now being adapted by others, is spreading among the non-indoctrinated students of history.

Mr. Scott also posts occasional essays at The New English Review. When NER was taken down last month by a DDOS — a Distribued Denial of Service attack — it was out of operation for quite some time. A few days before the site went dark, Scott had published an essay debunking Islam’s purported “golden age” in Spain. With only a momentary exposure before that cowardly attack, “Myth” didn’t draw the audience it normally would have. Thus at the request of NER and Mr. Scott, here is an excerpt “The Myth of Spain’s Golden Age”. It can be read in its entirety here.

Following the excerpts below you’ll find a link to Mr. Scott’s other essays at The New English Review and — ta da! — information on an upcoming book.

NOTE: The occasional emphases below are mine, as is the middle section of observation on Mr. Scott’s findings.

We have traditionally been told that the first two centuries of the Spanish Emirate, supposedly founded in 756 by Abd’ er Rahman I, constituted a veritable Golden Age of Spanish history. And indeed the opulence and prosperity of Spain during these years is contrasted very favorably with the poverty and ignorance of Christian Europe in the same period.

The following description of eighth-tenth century Cordoba, written by English historian H. St. L. B. Moss in 1935, may be regarded as fairly typical of the genre:

“In Spain … the foundation of Umayyad power [in 756] ushers in an era of unequalled splendour, which reaches its height in the early part of the tenth century. The great university of Cordova is thronged with students … while the city itself excites the wonder of visitors from Germany and France. The banks of the Guadalquivir are covered with luxurious villas, and born of the ruler’s caprice rises the famous Palace of the Flower, a fantastic city of delights.”

The picture Moss paints was derived from medieval Arab annalists, who spoke of a city of half a million inhabitants, of three thousand mosques, of one hundred and thirteen thousand houses, and of three hundred public baths — this not even counting the twenty-eight suburbs said to have surrounded the metropolis.

Over the past sixty years intensive efforts have been made to discover this astonishing civilization — to no avail. Try as they might, archaeologists have found hardly anything, hardly a brick or inscription, for the first two centuries of Arab rule in Spain. Between 711 and 911 there is almost nothing, with substantial remains only beginning to appear around 925 or 930.

According to the prestigious Oxford Archaeological Guide, the first two centuries of Arab control at Cordoba has revealed, after exhaustive excavations: (a) The south-western portion of the city wall, which is presumed to date from the ninth century; (b) A small bath-complex, of the 9th/10th century; and (c) A part of the Umayyad (8th/9th century) mosque. This is all that can be discovered from two centuries of the history of a city of supposedly half a million people.

By way of contrast, consider the fact that Roman London, a city not one-tenth the size that eighth and ninth century Cordoba is said to have been, has yielded dozens of first-class archaeological sites. And even the three locations [in Spain] mentioned in the Guide are open to question.

The city wall portion is only “presumably” of the ninth century, whilst the part of the mosque attributed to the eighth century is said to have been modeled by Abd’ er Rahman I. However, the latter character sounds suspiciously like his namesake and supposed descendant Abd’ er Rahman III, of the mid-tenth century, who indisputably made alterations to the mosque (which was originally the Cathedral of Saint Vincent).

Even when real archaeology does appear at Cordoba, from the second quarter of the tenth century onwards, the settlement is absolutely nothing like the conurbation described by the Arab writers. Indeed, at its most opulent, from the late tenth to the late eleventh centuries, the ‘metropolis’ had, it would seem, no more than about forty thousand inhabitants; and this settlement was built directly upon the Roman and Visigothic city, which had a comparable population.

We know [now] that Roman and Visigothic villas, palaces and baths were simply reoccupied by the Muslims, often with very little alteration to the original plan. And when they did build new edifices, the cut-stones, columns and decorative features were more often than not simply plundered from earlier Roman/Visigoth remains. A text of the medieval writer Aben Pascual tells us that there were, in his time, to be seen in Cordoba surviving buildings, “Greek and Roman. … Statues of silver and gilded bronze within them poured water into receptacles, whence it flowed into ponds and into marble basins excellently carved.”

So much for the “vast metropolis” of eighth to tenth century Cordoba.

The rest of Spain, which has been investigated with equal vigor, can deliver little else. A couple of settlements here and a few fragments of pottery there, usually of doubtful date and often described as “presumably” ninth century or such like. Altogether, the Oxford Guide lists a total of no more than eleven sites and individual buildings in the whole country (three of which are those from Cordoba mentioned above) which are supposed to date from before the first quarter of the tenth century.…

These are, in addition to the above three:

Do you notice a pattern in this list by Mr. Scott?

Except for the Berber settlements, these are all fortresses. There are no remainders of brilliant feats of Islamic engineering, nor any roads or aqueducts such as Roman occupiers left behind in other places. Islam appears to leave just military fortifications.

Throughout its rub-up against the West, Islam only ever lusted after the West’s technology in order to devise ways to tweak our ingenuity in order to visit death on us and on one another. In this new century witness their clever utilization of the cellphone and the pressure cooker.

That lust for murder and mayhem has not softened in a thousand years, though the killers have learned to drape themselves in sheep’s clothing to allay the fearful feminized West. Like any carpet seller in the souk, Islam deftly scamps our perennial naiveté and perhaps rightly views our self-inflicted castration with contempt.

Thus the inventions and contrivances originating in Islamic-occupied lands remain so sadly few. And why not? We do all the work since we obviously enjoy inventing things and — ugh — using our brains and hands for the sheer joy of creating artifacts. Islam, which looks down on ‘work’, can buy or steal the results of this labor and continue to view us, with some justification — though not for the reasons they think — as fools and tools.

Now, as we in the West have begun to wind down centuries of our own endlessly bloody internecine warfare, we fail utterly to consider our young men and their penchant for derring-do, their desire for glory. The West shames such boys and fails to engage what any polity ought to consider a valuable natural resource.

The French Foreign Legion is long gone, so Islam draws them like flies.

Jihad holds up an irresistible battle flag, a raison d’etre to a cohort starved for meaning. Dying for Allah? Why not? What have they to live for in a dissipated, ever more androgynous wasteland? What hope have they of meaningful employment where they live? What chance for founding a family based on mutual respect with a candidate from among their female coevals? More and more often those boys (and they are indeed boys of a certain age) despair of a future in the West. Here their dreams are dismissed as extremism or worse, while they face implacable demands for unquestioning allegiance to an effeminate nanny state.

Ah, but glorious Jihad is there to pick up the slack. A male mystique beckons, free of women’s rules and strictures. For the vulnerable amongst our young and restless men- who otherwise see only the prospect of drear conformity sans reward, the call is hard to resist. We fail to remember that from time immemorial young men have been eager for the shared hardships of the battlefield and its ensuing glory.

Meanwhile we frown on the Boy Scouts.

To continue with a further excerpt from Mr. Scott’s essay:

The same poverty of material remains and signs of occupation is found throughout Islamic North Africa between the mid-seventh and mid-tenth centuries, and Richard Hodges and William Whitehouse speak of an Arab-created “dark Age” in the region during those years.

What could all this mean? Whatever interpretation we might put on it — and there are several possibilities — one thing is very clear: The opulent and refined Islamic civilization which up till now has been placed alongside and contemporary with a dark, ignorant and impoverished Christian Europe of the seventh to tenth centuries, is a myth. When Islamic cities do appear, in the middle of the tenth century, they are very comparable, in terms of size and level of culture, to the contemporary cities of Christian Europe. Our entire understanding of European and Middle Eastern history during the seventh to tenth centuries needs a radical rethink.

Mr. Scott is correct, but the ‘rethink’ he suggests is becoming ever more fraught with unpleasant consequences for any who might try it in public, especially those like Mr. Scott who demand the integrity of truthfulness as an a priori condition for writing history.

Sadly, the smothering “consensus” on this issue of Islam’s former glory is a fairy tale, but it is one we will repeat if we are academics who want to retain our mandarin perks and aren’t overly concerned with the Truth (whatever that is). This selling of the intellect doesn’t differ in kind from the many other soul-killing demands made by those in charge.

The myths of Global warming have morphed without embarrassment into the next Henny-Penny hysteria, that of harmful ‘climate change’ brought about by sinful, selfish Western man (these moralizers are the philosophical descendants of Calvin, sans any godhead who will offer salvation). Those whose hands steer the ship of state sail blithely into poverty for their citizens via draconian environmental laws, taxes and penalties. It is penury for our own good, but not a fate they plan on sharing with us.

Predictable indeed are the unlawful abrogations of power.

Here is a listing of Emmet Scott’s other essays at New English Review.

His next book will be The Impact of Islam. If it is one tenth as gripping as Mohammed and Charlemagne, Mr. Scott will bring the study of history back to its former robust respectability.