I had to visit Torquemada the retinal specialist this afternoon to undergo the fourth treatment for macular degeneration in my left eye. The treatment consists primarily of having incredibly bright lights flashed into the eye as part of a scan, followed by an injection through the sclera into the vitreous humor. The process has been very effective so far — the eye will never be what it used to be, but I can function normally and comfortably in most circumstances, only covering the left eye while reading or working at the computer screen.

The experience has left me somewhat washed out, however. At the moment I’m not up to finding any cultural enrichment stories or editing new translations. But writing about Pogo is another matter entirely. It’s quite relaxing, even invigorating.

The second selected daily strip in our series is from 1952, also from I Go Pogo. The context of these panels includes two intertwined threads: (1) the 1952 presidential campaign, in which Pogo was an unwilling candidate under the slogan “I Go Pogo”, and (2) the Boy Bird Watchers, an ostensibly ornithological club run by Deacon Mushrat.

The featured characters in the story are the three bats, Bewitched, Bothered, and Bemildred. Their antics include some of the funniest material in Pogo, what with their free-associative conversation, their endless card game, and their identity crisis — the bats are able to identify themselves and each other only by which pants they are wearing. If they lose their pants, they don’t know who they are, and if they happen to switch pants, they are forced into a temporary exchange of identities.

The birds in this sequence have walk-on parts, and are not part of the permanent cast of Okefenokee Swamp: 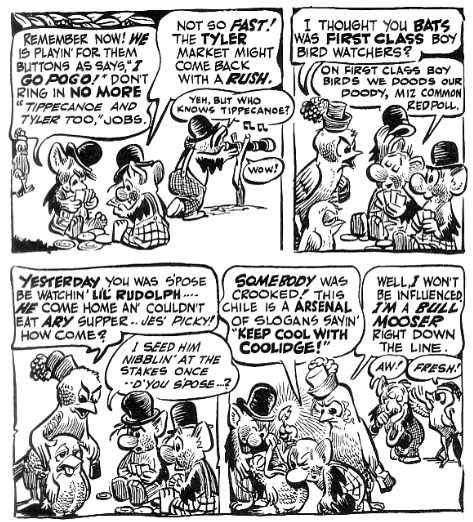 The jokes in the above panels demand some explanation for our European readers — and for any Americans who received a public school education after about 1975.

Part of the humorous impact comes from the breadth of the political campaign references, which span more than a century:

There was a time (including mine) when every schoolboy in America knew the slogan “Tippecanoe and Tyler Too”, but such is probably no longer the case.

Readers should be able to figure out the rest of the jokes (including the “stage business” in the background) for themselves. Note, however, the elegance and concision of Walt Kelly’s drawing style. He was an accomplished artist, and a few deft strokes of the pen allowed him to pack a large quantity of visual and verbal humor into a very small space.

More Pogo strips are coming up. Next time we’ll start on the third volume of daily strips, The Pogo Papers.

One thought on “The Pogo Project, Part 2”