“Youths” have been rioting every night since last Thursday in Altona, a borough in the western part of the German city of Hamburg.

Many thanks to Lena for compiling this report on the culturally enriched intifada in Hamburg. 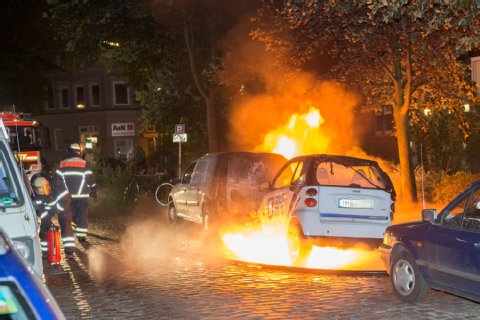 Three Nights of Muslim rioting in Hamburg-Altona
by Lena

For three nights in a row there have been heavy Muslim riots in Hamburg-Altona. On Thursday evening a mob attacked policemen. Last night they burned cars and hurled stones.

About 150 young people gathered Friday night in Chemnitz Street and in Holsten Street. “They wanted to let loose,” said a police spokesman. First the rioters only lit firecrackers; later they torched cars.

In Karl Wolff Street a car was completely gutted. Another car was set on fire in Hospital Street, but was able to be extinguished. Some time later the tires of another car were burning. More than 100 police officers were out in force. They used pepper spray against the rioters. In response the mob hurled stones at the officers. A 21-year-old man was arrested.

The following night on Sunday again around 80 young people gathered in Holsten Street, and fireworks were ignited again — luckily nothing more happened on the third night of riots. “The situation has become very calm,” said the spokesman for Hamburg police on Sunday morning.

The riots started on Thursday night when a group of youths blinded car drivers with a laser pointer. The police moved in – and suddenly saw a group of over 150 people moving towards them. 16 rioters were detained.

There was an aggressive mood and the situation escalated. In the media, not much was said about the cultural background of the rioters, but in the photos and videos it can be seen: There are ‘Asians’ and women with headscarves. Also, the battle cry “Allahu Akbar” can be heard in the video.

[Note: This video (in German) is a Muslim propaganda piece. — BB]

In this video about the events in Hamburg-Altona Friday night, one can hear very clearly “Allahu Akbar” at 0:26. Local Muslims are interviewed and show a completely different picture of what had happened. They are lying brazenly.

No matter where Muslims live, they are always innocent victims. The bad guys are always the others, because Muslims are, after all, permanently and everywhere suppressed and harassed and discriminated against.

The manner in which the Hamburg police are massively verbally — and obviously completely untruthfully — attacked is downright outrageous. Those who are familiar with Islamic ideology know that lying is an integral part of Islam, and the dissemination of lies plays an important role in strategy of conquest. Thus can these bold statements in the video be correctly characterized.

14 thoughts on “The Hamburg-Altona Intifada”