Nauru is a remote island in Micronesia about 2,000 miles northeast of Australia, east of New Guinea. It is approximately three miles across, and with 10,000 native inhabitants, the second-smallest sovereign nations in the world.

Up until the 1980s Nauruans were among the wealthiest people per capita in the world, thanks to phosphate mining from millennia of guano deposits. When the phosphates were mined out and hard times hit the island, the government struck a deal with Australia to provide a refugee detention center in return for a generous subsidy. The center is one of several (others are on Christmas Island and Papua New Guinea) where the Australian government warehouses boat people until their asylum applications can be processed.

Australia has seen an explosion of illegal immigrants in recent years, especially under the more relaxed asylum policies of the Labor government. Would-be “New Australians” make their way to Indonesia, cram into overloaded boats after paying an extortionate price, and try to make their way to Christmas Island or mainland Australia. Here are the three most recent official press releases from the Hon. Jason Clare MP, the Minister for Home Affairs, Minister for Justice:

Minister for Home Affairs and Minister for Justice Jason Clare today announced that the Australian Federal Police will pay rewards of up to $200,000 for information leading to the arrest and conviction of people organising people smuggling ventures to Australia.

More than 2,600 “boat people” have arrived in Australia since the beginning of July. Numbers of that magnitude do not constitute asylum-seeking: this is an invasion.

While their asylum applications are being processed, the Australian government prefers to warehouse the invaders offshore if possible, including on Nauru. The massive increase in the number of arrivals necessitated a expansion of the Nauru center, and a $140 million renovation of the complex was recently completed.

That $140 million literally went up in smoke on Friday night, when detainees at the camp rioted and deliberately set fire to camp buildings, almost totally destroying them. The alleged issue was that their asylum applications were not being processed fast enough. As it stands now, unfortunately, many of them will never see the land of Oz. Some will end up in prison, while others will be relocated indefinitely elsewhere. 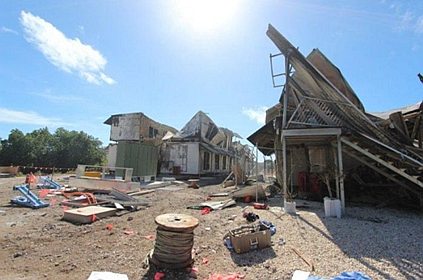 An Australian reader emailed us yesterday with a forward from a woman who works at the detention center on Nauru:

The last few days have been very stressful. When the detainees rioted last Friday night, workers were evacuated to the fly camp some 800m from the detention centre. I stayed behind, as did the command group who had to ensure all expats were safe. We exited the site shortly before 5.00 pm.

At about 8.00pm the detainees charged the security guards and the Nauruan police at the eastern end of the site . The guards and the police tried to hold their ground but were being pushed back.

While this was going on a group of Iranians syphoned petrol from cars in the car park, having breached the security fence. They filled some wheelbarrows with petrol and spread the petrol around inside their accommodation buildings and around administration buildings. Once lit the petrol soon got the buildings burning. At around 10.30 pm the whole site was alight.

While the fires were being lit the Nauruan police force called for volunteers. Fortunately, the locals responded and reinforced police and security guards who by about 11.30 contained the situation. I re-entered the camp at about 12.30am to see the last 7 months’ work burning before my eyes. I find it hard to put into words, even now, how I feel about the detainees.

We are currently constructing temporary accommodation for them as they are currently contained in an open yard or in the Nauruan jail. I am sure that these people should never be allowed to enter Australia — they are violent criminals posing as refugees.

That’s what it looks like to the people on the ground at Nauru.

Despite the dominant regime of political correctness, the tone taken by the Australian MSM is not very favorable towards the culturally enriched “refugee” arsonists. For example, consider this report from The Sydney Morning Herald:

Rampaging asylum seekers have left a $60 million damage bill to the Nauru detention centre, with dozens arrested over the riot.

Only the kitchen and recreation facility remain standing and usable.

“It is quite extensive damage,” a spokeswoman for the Immigration Department said.

No staff were injured in the unrest on Friday but a number of residents were treated in hospital for minor injuries and some for pre-existing conditions.

The spokeswoman said the damage bill was estimated at $60 million. She said their latest information was that 125 of those allegedly involved in this destruction were now in jail, with some 58 charged by Nauru police.

With accommodation for more than 600 trashed, residents will be housed in tents erected on the site planned for a new detention facility.

“We will have temporary ablution blocks installed and temporary water supplies put in place and meals will be prepared at the original kitchen,” she said.

Unrest at the Nauru detention facility started earlier last week with peaceful protests at the delay in processing of asylum claims.

The situation escalated on Friday afternoon with some 150 of the 545 male detainees setting fire to buildings.

Immigration Minister Tony Burke said he was waiting for reports on the full extent of damage.

He warned those involved that he had extensive powers to refuse or cancel visas on character grounds.

He said those detained by Nauru police should understand that they hadn’t impressed anyone in Australia.

Senator Carr admitted Australia would have no choice but to rebuild.

“As a destination country we have got to stump up the money for the accommodation and processing of people who arrive without visas,” he told Sky News.

Opposition leader Tony Abbott said riots were a problem when you couldn’t stop the boats.

Immigration spokesman Scott Morrison said this wasn’t the first detention centre to burn down under Labor.

“If you need any demonstration of Labor’s ability to implement offshore processing … then look at the fires on Nauru,” he told reporters in Melbourne.

“[T]hey hadn’t impressed anyone in Australia.” — that’s a nice bit of understatement.

From The Brisbane Times:

MORE than 400 asylum-seekers awaiting processing on Nauru will live in tents and marquees indefinitely as Immigration Minister Tony Burke yesterday vowed Labor would rebuild the $140 million facility that was destroyed by fire following a riot on Friday.

The folks who make their living in the asylum-seeker industry are unhappy with the new tougher policies implemented by the government. According to Radio Australia:

Asylum seeker advocates are calling for more details of the federal government’s plan to place refugees who arrive by boat in Papua New Guinea.

The Federal Government has announced that from now on no boat arrivals will be given asylum in Australia. The Government’s also announced a reward of up to $200,000 dollars for information leading to the conviction of people smugglers in Australia.

Finally, more details from ABC, including news on the mysterious suspension of the police commissioner on Nauru:

Nauru’s government says an Australian Federal Police (AFP) officer who was in charge of the nation’s police force was dismissed from the role in the middle of a riot that destroyed the island’s detention centre.

The Federal Immigration Department estimates Friday night’s protests caused $60 million worth of damage and more than 100 asylum seekers have now been charged.

The department is calling the incident a “disturbance” but Nauruan authorities are calling it a “riot”.

The director of the Nauruan government’s information office, Joanna Olsson, has confirmed to the ABC Nauru’s police commissioner, Richard Britten, who was on secondment from the AFP, was suspended during the protest.

It is understood there was a disagreement between the police commissioner and the Nauruan government, perhaps on how to deal with the unrest.

“Yes, he has been suspended. A local has been appointed to be the director of police, Richard was the commissioner of police and for the full details of the reasons behind [it], I’m not quite sure of it,” Ms Olsson said.

“I think there might have been misunderstanding, or something to that degree between… perhaps himself and the government.

“But I’m not sure to what, to what extent or the real reasons were behind that.”

She says many Nauruans have been upset by the actions of the asylum seekers and the damage they caused.

“Mind you, there was no escapees so they never got out into the community, which was a good thing, so there are undoubtedly angry Nauruans, but in terms of having the camp here, I think people are still okay with it,” she said.

“I’m told about 60 security guards were flown in over the weekend, some non-essential staff have been returned back to Australia, only because they’ve got no office to work from, so they’ve replaced them with security staff.

“I’m assuming they will probably stay back on island for a bit longer, because maybe they need added security presence at the camps.”

Police on standby ahead of unrest

Ms Olsson says the detention centre is still being cleaned up and revealed the events leading up to the unrest.

Local police were on standby from 2pm on Friday afternoon ahead of anticipated unrest.

“But actually the riot started about, roughly about 6:30pm on Friday afternoon, ended around 11pm,” she said.

“They were sort of protesting. I’m told they wanted answers about their asylum claims. So that all erupted into violence and fires in the end.

“The police were there until about 5am.”

The violence prompted Nauru’s acting president to recruit some extra people into the police force during the protest.

“[The] Nauru police force was established throughout the evening. There was a couple of hundred, I’m told, local men went up there to assist,” she said.

“But the police did a great job, they were at the frontline, they managed to hold the rioters inside the camp.

Ms Olsson has told the ABC that representatives from both governments are now meeting to decide how to proceed.

“I was up there just this morning, all the buildings are destroyed, except the recreation centre, the new kitchen,” she said.

“Most of that was destroyed, all the food reserves has been destroyed as well.”

The hundreds of asylum seekers at the centre have been housed in tents and are expected to be moved later in the week.

“It is hoped to have them moved by the end of the week to the second camp, which was supposed to be built for family accommodation,” he said.

“They’re still going to be in tents, I presume, at the second camp until they do the rebuilding of the federal accommodation for them.

8 thoughts on “The Fire Jihad Comes to Nauru”