The Islamic holy month of Ramadan has just begun, and as a possible consequence, there were fewer Muslims (if any) at today’s OSCE meeting. This gave the opponents of shariah more scope to make their views known. The BPE/ICLA team spoke several times today, and filed a paper and an intervention (which will be presented here later this afternoon). The proceedings were videotaped, and excerpts will be available in due course.

In the meantime, here are a few photos sent by Henrik: 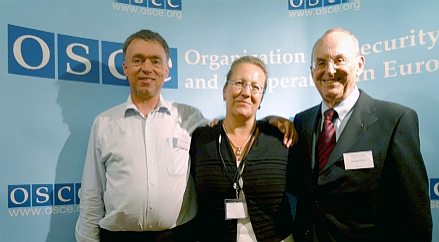 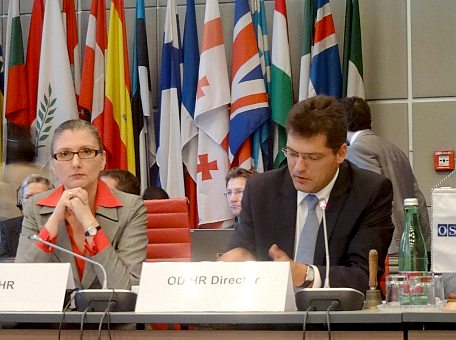 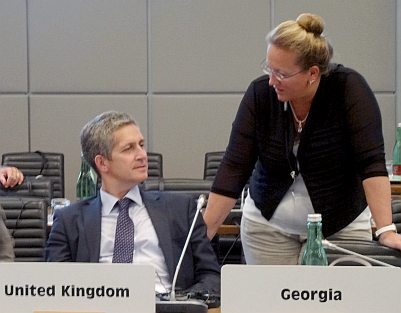 The UK representative and Elisabeth Sabaditsch-Wolff

Below are excerpts from the OSCE press release from before the conference:

VIENNA, 10 July 2013 — Representatives from the 57 OSCE participating States, civil society and international organizations will meet in Vienna tomorrow for a two-day conference on the rule of law as a cornerstone of human rights protection.

The participants at the meeting, which has been organized jointly by the Ukrainian 2013 OSCE Chairmanship and the OSCE Office for Democratic Institutions and Human Rights (ODIHR), will identify challenges faced by the Organization’s participating States and discuss how they can be addressed effectively while ensuring the full protection of human rights in line with OSCE commitments.

The agenda and further information is available at: www.osce.org/event/shdm_2013

And a press release after the opening of the first day of the conference:

VIENNA, 11 July 2013 – Governments should take steps to further strengthen the rule of law to better protect human rights, participants said today at the opening of the Supplementary Human Dimension Meeting in Vienna.

The two-day meeting, jointly organized by the Ukrainian OSCE Chairmanship and the OSCE Office for Democratic Institutions and Human Rights (ODIHR), brought together government and civil society representatives from OSCE participating States to discuss the role of legislative, regulatory and institutional frameworks in the promotion and protection of human rights.

“Understanding of the interconnectedness and mutual influence of the rule of law and the respect, protection and guarantee of human rights has been reflected in all the fundamental documents of the OSCE,” said Ukrainian Ambassador Ihor Prokopchuk, the Chairperson of the OSCE Permanent Council, at the opening. “All that a State does to strengthen the independence and professionalism of the courts contributes directly to strengthening observance of human rights.”

“We end up paying dearly for saving on human rights, the ultimate price being that of confidence in the government, which in turn undermines stability and security,” Lenarčič said. “It is in such circumstances that the OSCE’s comprehensive concept of security becomes more relevant than ever.”

Keynote speaker Tsog Log, Vice Speaker of the Mongolian parliament, said that Mongolia, the OSCE’s newest participating State, “has recognized the key principles of the rule of law and human rights and built them into the fabric of our legal system and society”.

“We have realized that to protect human rights there should be fair courts and independent judges,” Tsog said. “To ensure this, court reform and capacity building in the legal profession need increased resources”.

The meeting will take stock of current challenges faced by the OSCE participating States in ensuring the full enjoyment of human rights, and identify effective national and international instruments to protect human rights and prevent human rights violations. Participants will explore and make recommendations on strengthening the rule of law in the promotion and protection of civil, political, social, economic and cultural rights.

The BPE team is there to remind the OSCE of the discrepancy between its expressed principles and the illiberal practices now in place across most of the West. Gates of Vienna readers are all too aware with the way European and North American governments trample on the civil liberties of citizens who object to the Islamization of their countries. Some of the cases presented in Vienna will be familiar to you.