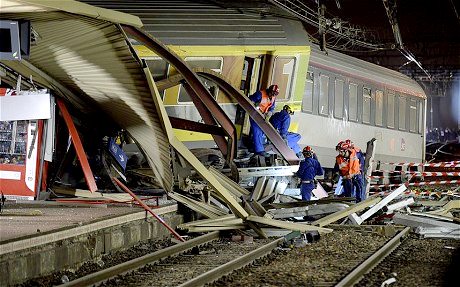 Yesterday afternoon a passenger train traveling from Paris to Limoges derailed while passing through the Parisian suburb Brétigny-sur-Orge, causing a catastrophic accident that killed six people and injured two hundred. The cause was initially thought to be an error in the switching system, but a loose steel plate is now suspected.

A culturally enriched aspect emerged in the aftermath of this horrific incident. One of our French readers sent the following translation of an extract on Europe 1 TV, in which a policewoman, Nathalie Michel, stated:

At 17.30, while our colleagues were on the spot of the train accident, they saw a group of “young people” approaching as if they wanted to help the victims. Immediately the police officers realized that the young people were coming to steal from the victims, especially the corpses.

Even though such media reports never mention ethnicity or religion, French listeners know by now that ‘young people’ means Muslims from North Africa.

Even Le Monde (via Riposte Laïque) mentions 30 ‘young’ stealing from the victims.

The Daily Telegraph mentions the corpse-looters briefly, referring to the culture-enrichers as “local people”:

A police spokesman described groups of local people “picking through the wreckage” on Friday night and looting from the bodies of victims, who were electrocuted or crushed to death.

“It appeared at first that they were trying to help, but it soon became clear that they were taking personal property away. When police approached they threw stones before running away,” said the spokesman.

Below is a longer article about the wreck from The Irish Times:

‘Human Error’ Did Not Cause French Rail Crash

France’s transport minister said human error did not cause a train derailment outside Paris that left six dead yesterday.

Frederic Cuvillier said that about 30 people were still being treated for injuries. In all, nearly 200 people sustained injuries in the initial incident, when four train cars slid toward the station, some falling over.

The crash was France’s deadliest in years, but Mr Cuvillier said it could have been worse and praised the driver who sent out an alert quickly, preventing a pile up.

Mr Cuvillier said it was unclear what did cause the crash, but authorities are looking into an error in the switching system as well as other possibilities.

This is one of the busiest travel weekends in France, which is celebrating the national holiday of Bastille Day on Sunday.

The Paris-Limoges train derailed as it sped through Brétigny-sur-Orge, 27.5km south of Paris, at 5.14pm yesterday. The train was not supposed to stop in Brétigny, a station on the suburban RER line.

Railroad sources said it was strange that the lead cars were not affected, while cars three and four fell flat on their sides, crushing waiting passengers on the platform. The last four cars of the train were cut off and thrown hundreds of metres. Television footage showed twisted tracks and rescue workers attempting to cut their way through wreckage.

Witnesses recounted a deafening sound at the moment of the derailment. Survivors said the train vibrated and swung from side to side as suitcases flew through the air. “I was reading,” a passenger told France 2 television. “The train started shaking as if it were rolling over pebbles; like a plane in turbulence.”

A high voltage line was reported to be lying on the ground, and it was feared that some victims were electrocuted or severely burned. Some 200 medical workers and eight helicopters sought out the wounded and ferried them from the site.

8 thoughts on “Looting Corpses at Brétigny-sur-Orge”