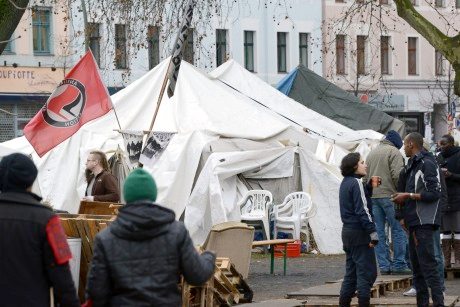 The following article about yet another “refugee” camp in a German city was published last week in Politically Incorrect. JLH, who translated the piece for Gates of Vienna, includes this note:

From PI, a lively discussion of the refugee camps in Berlin-Kreuzberg with some observations that apply to our own situation. Kreuzberg is the district that turned its long-term SPD mayor into a blunt critic of integration and immigration policy. Now it has a Greenie.

Give us Lots of Refugee Camps!
by Falko Baumgartner

What do Communism and Multiculturalism have in common? Both are ideologies which look more broken the closer you look. A current example of vegetating Multiculturalism is the refugee camp in left-green Kreuzberg. Here is a clash of cultures: Turkish Kreuzberg, eco-Kreuzberg, leftover-German (non-Berliners) Kreuzberg, and for some months now, Afro-Kreuzberg.

The last is a so-called “wild” protest camp of circa 100 black African asylum seekers on Oranienplatz, protected by supporters, as is familiar from the camp dispersed in Munich’s Rindermarkt. The demand is naturally the same: unlimited right of residence for camp members. But it would be best to award it to all persons in Germany. That could potentially be 7,000,000,000 people or, to put it another way, 20,000 per square kilometer. Colonialism today is an import from Africa and Asia, compliments of the Antifa. Let Germany kick the bucket. Left radicalism is smart enough to recognize that its dream of a final solution can be accomplished most rapidly and most fundamentally with unregulated mass immigration.

The camp is a big field test, a brave step in the leftist university city of Berlin from gray theory to live, multicultural reality. Every day, local residents can personally experience the fact that immigrant societies are conflict societies. Experience means seeing, hearing and, during he heat of summer, smelling. Several media outlets such as PI, the Preußische Allgemeine Zeitung or Blu-News have reported on the impossible conditions and growing tensions between the protesting refugees and Kreuzberg residents. Below, I would like to analyze briefly the logic of the protests and describe why the laissez-faire policy of the Green district mayor, Franz Schulz, could prove to be a boomerang. For more than a year, the movement of refugee protests across the country has followed the same pattern. Politicized asylum seekers — just as brazen as they are desperate — slip into the role of compliant peasants, while the asylum lobby in the background pulls the strings. Illegally erected, makeshift camps are intended to attract the greatest possible interest from the media and poke the nose of the always-interested “well-to-do mob” deeply into this diversity. The planning and execution of the action are accomplished by a left-radical support network which takes over the work of propaganda, demanding the right to remain for everyone — nothing more nor less than the complete and permanent doing-away with Germany itself. The low points of the street fighting are presided over by the party-organized multi-culti aristocracy, above all the Left party and the Greens, who pseudo-objectively “interpret” for the public the course and goals of the asylum extortion. Schulz, for instance, who has been demonstratively unmoved for months by the colorful activity in the camp on Oranienplatz. His perfidious calculation: the closer Africa is brought to Berliners’ front door, so much more is increased the pressure on the population and the Berlin senate to accede to the refugees’ demands.

I say, do it! Nothing better could happen for the opponents of leftist-green immigrationism. The closer the average Germans’ confrontation is with the reality of Multiculturalism, the sooner they will drop it like a hot brick. Here, as everywhere in Western Europe, Multiculturalism is advanced and demanded most vigorously by those people who are furthest removed from its negative effects. That is, above all, the middle and upper class in their pure-bred German terraced developments and lily-white suburbs where they may still sun themselves in the moral superiority of “anti-racism”, because they only know of foreigner criminality, Islamism and the de-Europeanization of every day life from the newspapers. That is the schizophrenia of the multiculturalists: “Diversity”, but not in my backyard. This is the zone of comfort and security that must be cracked, so that the decision-makers in Germany are shaken up and true movement will occur in the politics of immigration and integration. “Peace to the hovels! War to the multiculti palaces!” *

Granted, bourgeois-leftist Kreuzberg does not quite fit in this class, but as a gentrified zone, it is certainly good enough for a first example. The actual victims on site are not the camping economic refugees, but the residents, who have the privilege of paying Western European rents to live under African conditions. Except the Kreuzbergers — from everything I have read — have been and still are afraid to express their unease. Even the oh-so-quick-on-the-trigger Berlin cheekiness is silent in the face of the omerta of political correctness. Nobody wants to be “hostile to foreigners.” And besides. what would the neighbors think? So what can you do?

Let us take the following ideal scenario. The police assume the role of bogeyman and break up the camp. Then we would see enraged residents complaining to the cameras about the alleged excess of the police intervention, protesting and showing their class solidarity with the camp occupiers. No words could sufficiently express their outrage. But as soon as they feel they are alone and unobserved, the same people take a relieved breath and rejoice at the long wished-for end to the miserable conditions in their front yard. The key word is built-in schizophrenia. Everything would remain the same. The police are the bad guys, the blacks are the poor souls and the residents are the good guys — the same division of roles in the Kreuzberg cosmos as always. No one is forced to re-think. The Kreuzbergers are self-assured once more of their good-guyness. Their image of themselves and their world is intact. Me good, you racist.

Why should anyone do these people the favor of allowing them to continue with their own double morality? I say, let the Kreuzbergers live with what they stand up for. The camp, the filth, the noise, the occupation — let them stay. Anyone who does not complain wants the isolation zone to be as it is. It is time for the Kreuzbergers to show some civil courage and lead the way, instead of secretly, quietly and softly hoping for help from others. As Che might say: Put one, two, many refugee camps right here among us! The more there are, the quicker the pressure in the kettle will rise, and Multiculturalism will be exposed as the force that is overloading us with foreign elements and taking away our ability to speak for ourselves. That is what it has been for us Germans for too long.

* Adapted from a well-known phrase by Georg Büchner.

5 thoughts on “Give us Lots of Refugee Camps!”