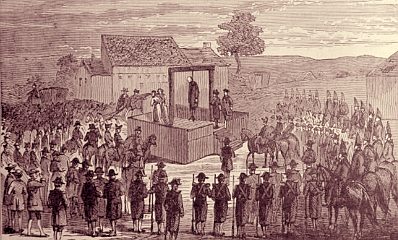 There are three important characteristics of a properly-functioning state:

The third characteristic is crucial. Writers on political economy have long recognized that if a state is to retain its legitimacy, justice must be seen to be done.

We live in a time when laws have proliferated extensively, so that virtually every citizen breaks at least one law every day, mostly without realizing it. Under these circumstances, it is important to remember the distinction between what is legal and what is just.

When a man coasts through a stop sign at an empty intersection, where he can see clearly that there is no traffic for a mile in all directions, and receives a traffic ticket as a result, this is legal but it is not just.

When a householder in Britain is fined £200 for improper use of a wheelie bin, this is legal but it is not just.

When Tommy Robinson is imprisoned in solitary confinement for several months for using someone else’s passport to enter the United States, this is legal but it is not just.

When an immigrant to Denmark who rapes a child and attempts to rape two others is sentenced to only six years in a comfortable Danish prison (of which he will serve three), and will not be deported after serving his sentence, this is legal but it is not just.

I will focus on this last example, because this particular crime is so monstrous and the outcome so egregiously unjust. The rape of a small child is an abomination, and until a century or so ago would generally have been punished with execution throughout the West. This is because death was widely viewed as a just reprisal for the crime: the child’s life, even if he or she survives the rape, has been in many ways functionally destroyed, as has that of the parents. When the rapist is executed, justice is seen to be done.

In the case of the Gullestrup child rape, let’s imagine a different outcome. Suppose the perpetrator, instead of being apprehended and arrested, had been caught in the act by a posse of local Danish men, including the father of the little girl. Let’s further imagine that after being roughly handled by the crowd, he was summarily judged by the father and a group of local notables, and then immediately hanged from the nearest tree tall and strong enough to bear his weight at the end of a rope.

This would have been grossly illegal, but in the eyes of the local community, justice would be seen to have been done.

In contrast, take a look at what actually happened. Peaceful, law-abiding Danes allowed the police to do their job. The man was arrested without being hurt. He was kept safe from harm under humane conditions, provided legal counsel (presumably at taxpayers’ expense), granted a trial with all the protections and legal procedures designed to ensure that his rights were not violated, and found guilty. The penalty prescribed by law was imposed upon him, and he was sentenced to six years in prison, of which he will likely serve three, and be deported upon release. After his lawyer appealed the sentence to a higher court, the deportation order was overturned.

In three years this young monster will be free to walk the streets of Denmark, including the village of Gullestrup. While on the sidewalk there he may pass his victim — who will not even have attained her majority at that point — and leer at her without fear of judicial reprisal.

This is all legal, but it is not just. And justice is not seen to have been done.

I would wager that more than 90% of the Danish populace — the remainder being socialist politicians, progressive theologians, academics, and media people — are outraged by this situation, and do not consider that justice has been done.

If repeated often enough, cases such as this one are poisonous to the polity at large. The state loses all legitimacy in the eyes of the people. Eventually, after they experience one too many instances of Law without Justice, some sort of civil insurrection against the established order is all but inevitable.

The situation described above is not confined to Denmark. It is, for example, far worse in Britain, where Muslim gangs that keep captive white girls — children — as sex slaves have operated with impunity for more than a decade. Rapists are often let off without a prison sentence by British courts. You don’t need The Daily Mail to tell you that justice is not seen to be done.

This process can continue for only so much longer. It’s like a large open room that is gradually filling up with invisible hydrogen gas. Everything looks normal, and activities continue as usual, until at some point a match is lit or a spark struck from a scrap of metal. Then, in the blink of an eye, everything changes.

It’s hard to say what the match or the spark will be in Denmark, Britain, or any other Western state. It could begin with a bout of mob violence after a particularly abominable crime goes unpunished. It could occur when the currency inflates, after which the power of the repressive state to coerce the conformity of its citizens will be severely reduced. Or it could be some other incident that can hardly be imagined now.

But the spark will someday be struck. And the building will go up.

That will be followed by a period of violence, horror, and lawlessness of indefinite duration. Afterwards the remnants of European civilization — and by that I mean white people of European descent, Jews, and the descendants of those from other cultures who have assimilated fully to their country and totally share its values — will gradually reform into proper, functioning states that protect their citizens and administer justice in the traditional way.

How will such a society treat the equivalent of the Gullestrup child-rapist?

I picture a process that would run something like this:

After suffering a black eye and a broken nose at the hands of the enraged citizens who apprehend him, the local constable intervenes and locks the rapist up out of harm’s way. The following morning he is arraigned before a magistrate, assigned legal counsel, and charged with the crime. If this occurs within the remnants of the Anglosphere, a jury is rapidly empanelled. The following day the trial is held. Witnesses give evidence, and the accused is allowed to plead his side of the case and call his own witnesses. Before the end of the day the guilty verdict is handed down by the judge (or jury), and the accused is sentenced to be hanged by the neck until he is dead. The morning after that (if it is not Sunday), he is led, blindfolded and sedated, to the platform, where he receives last rites from a minister of his faith. Then the trapdoor drops from under him as the assembled community watches.

The above description probably offends most modern Westerners, who would view it as a barbaric atavism, a reversion to cultural practices that we are supposed to have evolved beyond.

Yet many people will agree that this is true justice. It’s hard to determine how many, because we are all aware of what we are supposed to feel and think about such matters, and we all know the potential consequences for expressing an incorrect opinion. In my part of the world, at least, I would expect the vast majority of citizens would agree in such circumstances that justice had been done.

This is because justice in this form was the norm throughout the West until four or five generations ago, and had been for centuries, since the rule of law was first established in the nations of Europe. Yes, it’s true that in those days vigilante justice, official malfeasance, corruption, and other flaws marred the smooth flow of justice. But what I described above was the rough norm in the European diaspora up until the beginning of the 20th century.

That’s when everything changed. The science of penology was invented, prisons were transformed into penitentiaries and reformatories, and rehabilitation became the order of the day. The rights of accused criminals were extended and elaborated by judicial fiat, penalties were reduced, and many acknowledged criminals escaped scot-free, quite legally.

And justice was not seen to be done.

This is an anomalous situation. It is aberrant and abhorrent to the vast majority of citizens. Therefore it cannot sustain itself much longer.

As the sage Lao Tzu said two and half millennia ago:

This is not the way of Tao.
Whatever is contrary to Tao will not last long.

Justice must be seen to be done.

34 thoughts on “When Justice Is Not Seen To Be Done”