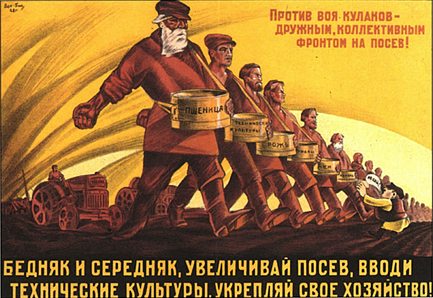 As America’s ‘exceptionalism’ erodes and we become just another threadbare socialist failure, the idea of doing an occasional Soviet joke has come to seem more and more appropriate. One has only to read the Drudge Report headlines to see how far down the slippery slope we’ve gone. It looks like we’re picking up speed, too.

So today, while I still feel well enough, I’m instituting this “Happy Life in the USSA”…that’s its name for the moment. It may be that readers will suggest something better and it will change with the next one, whenever that is.

Several events have converged to lead me into this project: talking to Oleg at The People’s Cube about his experiences growing up in Ukraine. Another is receiving soviet-style jokes from people I would never have thought likely to notice. In other words, it’s in the air. Finally, I’ve always been attracted to gallows humor and ethnic jokes. Those people understand how humor arises in the face of misery; not in spite of our suffering but because it is a robust response of liveliness in the face of death or being silenced. That is sadly true as the shadow of the gallows they’ve set up for free speech looms ever larger over our public space.

Might as well tell these while I can, eh?

The joke that finally pushed me to begin this series isn’t all that funny or memorable. What was striking is its obvious resurrection from an earlier life in Russian. Or Polish — or any Eastern bloc country where those who ran the state security apparatus were to be feared. In its current incarnation, there are these two fellows, see…or rather, there are these two workers:

Oh wait, we have to begin with the straight man:

A guy stopped at a local gas station, and after filling his tank, he paid the bill and bought a soft drink. He stood by his car to drink his cola and watched a couple of men working along the roadside.

One man would dig a hole two or three feet deep and then move on. The other man came along behind him and filled in the hole. While one was digging a new hole, the other was 25 feet behind filling in the hole.

The men worked right past the guy with the soft drink and went on down the road. “I can’t stand this,” said the man tossing the can into a trash container and headed down the road toward the men. “Hold it, hold it,” he said to the men. “Can you tell me what’s going on here with all this digging and refilling?”

“Well, we work for the government and we’re just doing our job,” one of the men said.

“But one of you is digging a hole and the other fills it up. You’re not accomplishing anything. Aren’t you wasting the taxpayers’ money?”

“You don’t understand, mister,” one of the men said, leaning on his shovel and wiping his brow. “Normally there’s three of us: Me, Elmer and Leroy. I dig the hole, Elmer plants the tree, and Leroy here puts the dirt back.

“You see with the government sequestering, they are not buying any more trees so Elmer’s job’s been cut …now it’s just me an’ Leroy.”

Yeah, I know; kind of lame. But it’s a start. I loathe and despise the way this sequester has been used to shut the White House to the public while the residents there continue to throw lavish private parties for the rich and famous. Pure spite – and taking it out on school children at that. The kids are the ones who save their money so their classes can visit “The People’s House”. Now it’s Hamlet’s House.

Meanwhile, back on the ever-shakier ground, for some real Russian humor — or Ukranian — do visit Oleg at The People’s Cube.

There is also the larger group to which he belongs, other politically incorrect blogs at The Gulagosphere.

Oh, and here’s the immediate impetus for this endeavor, another in the series of Arkady Renko’s adventures in Moscow:

I just finished reading it this week; Martin Cruz Smith still spins a fine yarn. One leaves that dark atmosphere with more respect for the ability of men and women simply to endure.

16 thoughts on “Happy Life in the USSA”